With the coming of cold winter days, Turkey’s cake and pudding shops begin serving salep in place of ice cream. On the ferryboats which ply their way between the European and Asian shores of Istanbul with smoke trailing from their funnels and chased by flocks of seagulls, many of the passengers order steaming cups of this delicious warming beverage. It is made from the powdered root of several species of wild orchids and is both tasty and nourishing. It keeps the body warm in cold weather and increases resistance against the colds and coughs of winter.

The Turks have been drinking it for many centuries. After they became converted in the 8th century to Islam, a religion that prohibited the consumption of alcoholic drinks like wine and kimiz (made from marsh milk), non-alcoholic beverages like boza (made from maize), sira (grape juice) and it took their place. While sira was the preferred drink of the summer months, boza and hot salep were the drinks of winter. Also known as cayirotu or cemcicegi, salep is believed to be good for disorders of the intestines, colds, and coughs; improve the appetite and increase virility. Ancient folklore relates that it was an ingredient of love potions brewed by witches. 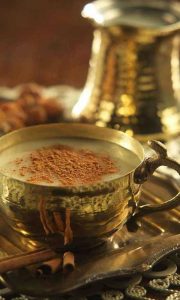 In Ottoman times, it was an ingredient of invigorating pastes prepared for the sultans, along with ginger, coriander, senna, black cumin seeds, coconut, aniseed, and numerous other herbs and spices. In winter, it is prepared to drink with milk and it was sold by street vendors, who kept it warm in large copper jugs on a brazier. Their customers would warm themselves by the brazier and drink it out of large cups without handles.

A traditional drink of the Middle East, it was introduced to Europe, and became popular, particularly in England, where it was sold in many shops, and served with bread and butter. Gradually, however, as coffee drinking became widespread, its use in Europe died out.

The largest tubers are gathered from orchids growing in forested mountainous regions, while those growing in meadows and high pastures are smaller. They grow best in soil with a high lime content, and those with the finest aroma and richest in starch are found at altitudes of 1000 to 1100 meters. In Anatolia, most orchid species belong to the genera Orchis and Ophrys. Wild orchids are most abundant in the provinces of Kahramanmaras, Adiyaman, Bitlis, and the Black Sea provinces, particularly Kastamonu. They flower in April and May and then seed. Some of the flowers are scentless, while others produce a sweet scent that is strongest in the evening, and their colors vary from white to various tones of purple.

The orchid tubers are gathered while the plant is in flower. Each orchid has two tubers, one the main tuber from which the flower springs, and the other its younger offshoot. Only the young tuber is harvested, leaving the main tuber untouched. The cream-colored tubers are either egg-shaped or forked. They are washed and then tossed into boiling milk or water for a short while to remove the bitter flavor and make it easier to dry. They are then dried either in the open air or in ovens to speed up the process. After drying they may be stored whole or ground. The principal substances contained in it vary according to the time of harvesting but consist of mucilage, starch, sugar, and nitrates. The color is generally creamy. It is the traditional thickening ingredient in Turkish ice cream, and the substance that lends the characteristic glutinous texture as well as subtle flavor. It is also used mixed with sugar and milk to make the hot drink known as sahlep, which is served sprinkled with cinnamon. It is the most popular hot drink at ski resorts like Uludag and Kartalkaya and is sold by street vendors outside football stadiums. When Ramazan falls in winter, as it does this year, it even appears on the dinner menus of elegant restaurants and luxury hotels.

It is expensive, so what is sold as sahlep may often be made with more cornstarch than the real recipe. Therefore, if you do not want to be disappointed, it is better not to drink at a less reputable vendor or something sold in the street. Places to be recommended include the pudding shops of Beyoglu and along the Bosphorus which are famous for their salep. Even better make it yourself at home, which will save you from going out in cold weather. It is simple to prepare. You can buy the powder from the Misir Carsisi (Egyptian Market) in Istanbul, or other spice shops, and it will keep in a glass jar indefinitely. Just boil up with milk and sugar for a delicious health-giving cup of sahlep.