The former Greek village of Kayakoy makes a striking impression on visitors, with its stone houses and churches, narrow streets, and spectacular setting. To get to this ghost town in southwestern Turkey, take the road from Fethiye towards Oludeniz Lagoon, and when you reach Hisaronu follow the signposts to Karymlassos. Five kilometers further on, you will see a steep hillside covered with the ruins of stone houses. Each is positioned so that it does not cut off the sun or view of the other.

The earliest remains in the site belong to the Lycian city of Karymlassos, and it was established on this ancient site in the 11th century according to some sources, and the 14th century according to others. The 17th-century Turkish writer Evliya Celebi tells us that the Greek name of the town was Levissi. It was a prosperous place until 1912, with a population of 6500, churches, schools, pharmacy, hospital, post office, workshops, and even a printing house producing the Karya newspaper, which had the widest circulation in the south Aegean region. 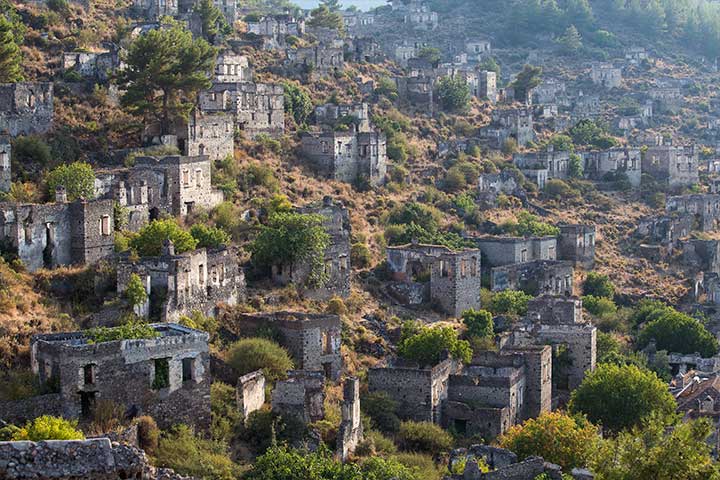 Anatolian Greeks never wasted fertile land by building on it, instead choosing rocky sites for their homes, and it is a typical example. The two churches, Panaghia Pyrgiotissa in the lower part of the village and Taksiyarhis in the upper part, are still standing, but the around two thousand stone houses, chapels, workshops, schools, hospital, library, and other buildings have not resisted the passage of time so well. Nonetheless, the paved roads and squares, and in the houses, the stone hearths, unusual lavatories reached by spiraling passages, cisterns, and pebbled flooring give a clear impression of what the settlement must have been like a century ago.

Pioneered by the Chamber of Architects and the Turkish-Greek Friendship Association, a project was launched in 1988 to restore the area as a symbol of peace and friendship between Turkey and Greece. The project won the support of the Ministry of Public Works, and it was declared a grade three urban and archaeological conservation area.

In addition to its historic interest, its environs are ideal for a wide range of sporting activities, including trekking, parachuting, jeep safaris, mountain climbing, scuba diving, and sailing. Several marked footpaths around the site lead to nearby bays and scenic walks along the winding coast. For those seeking an adventurous day out, jeeps can be hired from Fethiye to explore the unsurfaced roads around the Gulf of Fethiye, Kayakoy, and from there to Kelebekler Vadisi (Butterfly Valley) and the bay of Kabak, ending up at Mount Babadag, whose summit commands a breathtaking view over the entire area. All the way the roads pass through pine forests.

If you happen to have your paraglider with you, the flight down from Babadag is one of the most memorable in the world. This mountain soars almost sheer from the shore of the Mediterranean up to 2000 meters and depending on the wind direction, you can glide towards Oludeniz Lagoon or Kayakoy. The beaches near the ancient site are suitable for swimming for most of the year. 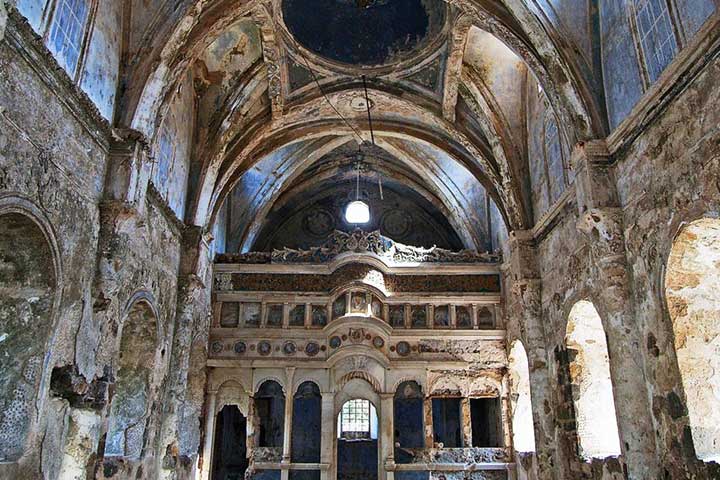 When you climb the narrow streets up to the chapel at the top of the village, there is a wonderful view over the abandoned village. From the chapel, a pleasant thirty-minute walk takes you to Soguksu, where you can enjoy bathing from empty beaches encircled by pine trees. To take photographs of this ghost town; wait for the sunset at the chapel on your return journey. As the sun sinks towards the horizon, the stone houses on the hillside glow with color. And if there is a full moon, do not miss the chance to wander through the ghostly houses of the ghost town by moonlight!

Once exploring Kayakoy, take a rest at one of the cafes in the square, and try some of the delicious sage tea. Now, there is one thing left to do, and that is to hire a horse from Atci Nadir and ride to Afkule Monastery. It does not matter if you are an inexperienced rider. Nadir’s horses are well trained, and you will soon get used to them. This monastery, built by a monk called Ayios Elefterios, is built on top of cliffs rising from the seashore and is just as fascinating as the more renowned Sumela Monastery in Trabzon. Inside the monastery is a cistern built between the rocks, where water filtering down from the mountain into the cistern has formed stalactites.