The Sumela Monastery is a historic site located in modern-day Turkey. At over a thousand years old, it is one of the oldest monasteries in the Christian world. However, age alone is not what sets this historic site apart.

Travelers come from all over the world…to look up. As in 1,200 km (4,000 feet) to the cliffside where the monastery is perched. If you are planning a trip to Turkey or the surrounding region, the Sumela Monastery is not to be missed.

For many years, travelers could only view the site from a distance, but today visitors are welcome to walk the grounds again. Travel Atelier gives you an overview of this historic site as you plan your next luxury vacation in Turkey.

Where in the World is Sumela?

Built right into the side of the Melá Mountain, the Monastery at Sumela lies about 45 km (28 miles) from the city of Trabzon on the coast of the Black Sea in northeast Turkey.

Part of the Altindere National Park, the area is simply beautiful, marked by lush trees and mountain streams, which add to the awe-inspiring nature of the location. 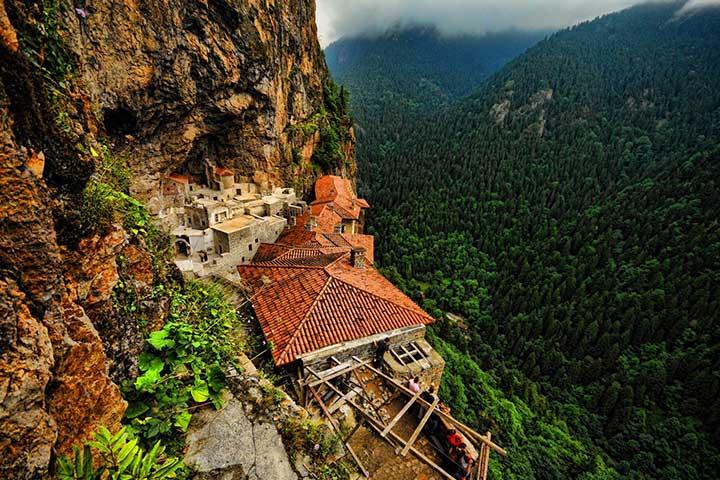 Highlights of the Sumela Monastery

The Sumela site is comprised of several buildings, including the Rock Church, chapels, kitchens, student rooms, sleeping cells, a guesthouse, library, and a sacred spring revered by the Eastern Orthodox Christians.

The old-world Turkish influence is easy to see, from the design of the cupboards, niches, and fireplaces, to the inner courtyard and colorful mosaics on the walls.

You reach the monastery via a long, narrow staircase. A large Roman aqueduct, which once supplied water to the entire compound, marks the entrance. Next to the entrance is the Guard Room, and then another staircase leads down into the inner courtyard.

On the left is a cave, which later formed the central formation of the Rock Church. Along the front part of the cliff is a large building with a balcony, which once served as sleeping quarters for the monks and guests. 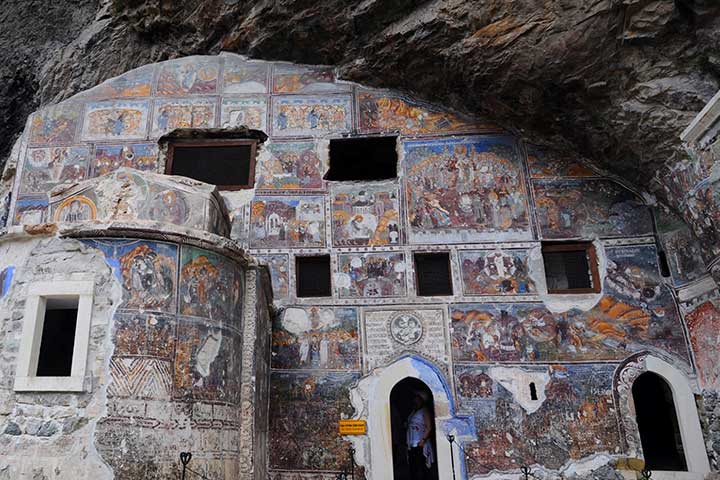 The Rock Church is perhaps the most interesting aspect of the compound, as it seems to be wedged right into the corner of the mountain. The interior and exterior walls are covered in beautiful frescoes depicting the life of Christ and the Virgin Mary.

The frescoes were painted during different periods, with some dating back to the 15th century, while others were added during the 18th and 19th centuries.

History of the Monastery

Sumela is a Greek Orthodox monastery dedicated to the Virgin Mary. The locals refer to it as “Meryem Ana”, which means The Virgin Mary.

The origin of the name is not certain, but some believe it stems from the word “mela”, which means black. The name may also refer to the nearby Karadaglar Mountains (Black Mountains).

Legend says two Greek Orthodox monks from Athens (St. Barnabas and St. Sophronios) founded the Sumela Monastery around 386 A.D. after seeing a vision of the Virgin Mary in a cave. The cave later became the site of the Rock Church.

The monastery has changed hands many times over the centuries, undergoing periods of both neglect and expansion. The structures were restored and enlarged in the 6th century by General Belisarius, under the direction of Emperor Justinian (Byzantine Empire).

In the 13th century, the Komnenos Dynasty took over the province of Trabzon, and Alexios Komnenos III (1349-1390) oversaw another expansion of the compound.

The Ottomans and Sultan Mehmet II conquered Trabzon in 1461. However, the Sultan declared the monastery a protected site so it was spared from destruction.

The Greek Orthodox Christians who remained in the area were forced to worship in secret, hidden churches, including the monastery. 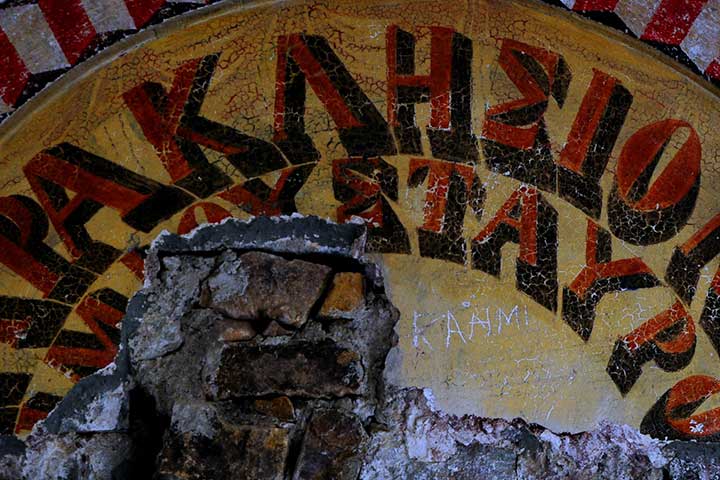 The 18th century saw further restoration and expansion of the monastery under Voivodas. New frescoes were added to the outer and inner walls. Expansion continued in the 19th century, with the addition of several more buildings.

By this time, tourists had discovered the monastery and many came to see the cliff side wonder. All the while, the monastery remained active, with visitors that included Christian monks and Muslim pilgrims.

The End of Sumela

From 1916-1918, the Russians occupied Trabzon, and many hoped there would be a complete restoration of the monastery. However, those hopes evaporated when the Ottoman Empire collapsed after the National Liberty War in 1923.

As a consequence of the Treaty of Lausanne, the Sumela Monastery was abandoned as part of a forced exchange between the Greeks and the Turks. This exchange included land and the transfer of about 2 million people.

The Greeks who left the province of Trabzon founded the Panagia Soumela Monastery on Vermio Mountain in Macedonia, Greece.

Fire and Looters Destroy a Legacy

Sadly, a fire damaged the wooden parts of the monastery in 1930. Treasure hunters looking for loot did great damage to the remaining buildings and structures. Despite the damage, the Sumela Monastery remains a popular tourist destination and outdoor museum.

Recently, the Turkish government began funding a restoration project, and in 2017, workers discovered a secret hidden chapel. The revealed treasure features vibrant murals depicting heaven and hell, and life and death. Some believe the chapel may be even older than the original monastery. 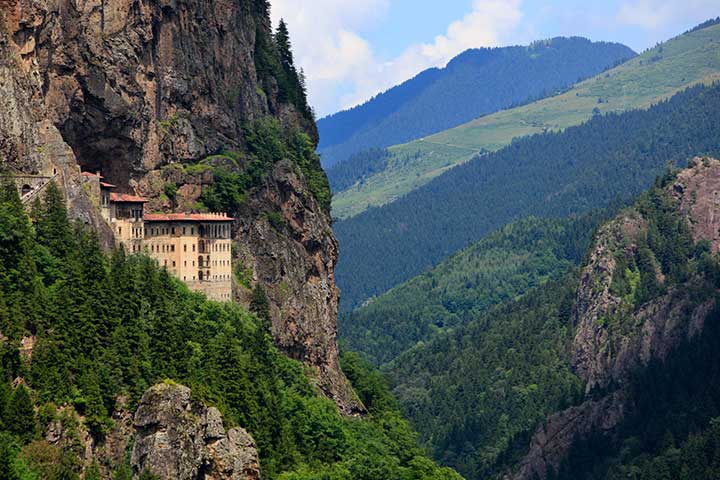 If you are planning a trip to Turkey, the Sumela Monastery should be on your list of places to see. Getting there is fairly easy. If you are especially a solo traveler, simply go to a dolmus (public bus) station in Trabzon and buy a round-trip ticket.

If you prefer, Travel Atelier can arrange for transportation and a tour. Your luxury travel agency can take care of every detail. The excursion generally lasts a full day, including travel and several hours at the monastery.

Travel Atelier is your one-stop destination for luxury travel in Turkey, Greece, Italy, Spain, Croatia, and Jordan. We can plan your full travel itinerary, including flights, hotel stays, tours, yacht charters, and activities from wine tastings and cooking classes to pottery making.

Our travel experts can also arrange special guided tours in Istanbul, Cappadocia, and the Aegean region. Contact us today to begin planning your Turkey and Eastern European adventure.