As most of us know; the name of King Midas is linked to Gordion; the capital city of ancient Phrygia. While mostly he is known as a mythical character; several Phrygian kings bore this name and naturally, different legends and stories had grown up. Among these, the most common one is Midas and the golden touch which has been told for centuries as also fairy tales.

King Midas of Phrygia, a kingdom in Asia Minor, was a friendly and well-behaved man, though overly obsessed with luxury and wealth. Apart from the mythological face of the medallion, supposedly, he also founded the ancient city of Ancyra -the modern Ankara (Capital of Turkey).

How Did He Get the Golden Touch

In the hope of spreading the love and use of wine in India as well, the wine god Dionysus traveled through the territory of Midas. Sileinus, one of the fellows of god, wandering off drunk from the grand procession was captured by peasants who brought him before the king. He commanded his soldiers to release him and hosted him royally by offering wine & dine. Dionysus, thankful for the hospitality and kindness done for his fellow, offered Midas the grant of anyone wish, and Midas asked for the legacy of the golden touch.

Dionysus, in his divine wisdom, saw where this would unavoidably go, but despite his plea the Midas reconsider, his request, the king insisted and the god was bound to honor his promise. Soon enough, he learned that even his food would turn into gold. He begged Dionysus to take back the gift, which he could not do, but he told Midas instead to bathe in the River Pactolus. He did, and the power granted the king was somehow transferred to the river. And so the Pactolus in historical times was far-famed for the grains of gold that could be washed from its sands.

Another tale tells of how he was called upon to judge a musical contest between Apollo and the satyr Pan (Marsyas).

Now, he himself chiefly worshipped the god Pan, who played fascinating music on his pipes, and Pan had challenged Apollo to a music contest with King Midas as the judge. He awarded the prize to Apollo’s lyre-playing rather than Pan for the music of his pipes. He made no secret of his opinion that Pan was the better musician. In anger, Apollo changed the king’s ears to those of an ass, and the humiliated Midas took to wearing the Phrygian hat – a kind of stocking cap- pulled down over his ears. Only his barber knew the truth, and he had been sworn to secrecy. But the knowledge got to be more than the gossipy old barber could contain. So he went out into the country, dug a hole in a solitary place, whispered the secret into the hole, and then covered it up much relieved. But the following spring reeds and grasses grew on the spot where the barber had planted his secret, and the wind whispering through them told the sibilant secret over and over again that he had the donkey ears:

These legends are thought to relate to the successor of Gordios, about whom another story that may have some basis in reality exists. It tells how, during the reign of Gordios, an oracle foretold that a poor man who would enter Gordion by an ox cart would one day rule over the Phrygians. 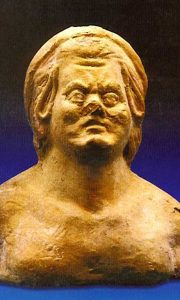 As the king and nobles were discussing this prediction, a farmer named Midas arrived at the city in his cart Gordios, who had no heirs, saw this as the fulfillment of the prophecy and named Midas his successor. Subsequently, he had his cart placed in the temple of Cybele on the Gordion acropolis, where it was to stand for half a millennium.

Somehow, the belief arose that whoever untied the knot that fixed the cart to its yoke would become the master of Asia. During his stay in the city, Alexander the Great took it upon himself to cut the Gordion knot severing it with his sword. The final king of the Phrygian Empire was also called Midas, and some questionable information about his reign survives. He is referred to in Assyrian records as Mitas of Mushki, who paid tribute to the Assyrians after being defeated in battle by them. He is thought to have reigned from 725 BC to 696 BC and the Greek historian Herodotus describes how he dedicated his throne at the Delphic shrine of Apollo and married the daughter of one of the Ionian kings.

The City of King Midas

The Phrygians are one of the peoples who lived in Anatolia, the cradle of civilization. They contributed not only to Anatolian culture and mythology but influenced Greece on the opposite shore of the Aegean, Rome, and many civilizations of the Middle East. The Phrygians called bread ‘bekos’, water ‘akala’ and mother ‘matar’. Like so many of the civilizations which flourished in Anatolia, they migrated here from elsewhere, in this case from Thrace and the shores of the Danube around 1250. It is probable that they made the journey by horseback since their neighbors described them as ‘a horse rearing aristocracy’. After settling in Anatolia the Phrygian tribes lived a nomadic existence along the coast of the Marmara Sea and in the area bounded by the bow of the Sakarya river.

In 738 BC they established a powerful Phrygian kingdom whose capital was Gordion near Polatli west of Ankara.

They are known to have lived in populous settlements, and to have regarded as sacred the area known as Phrygia of the Mountains – a region of high meadows – in the triangle demarcated by the towns of Eskisehir, Afyonkarahisar, and Kutahya. In this mountainous region, the Phrygians carved and built many rock monuments, most of which are still to be seen today.

According to legend and the accounts of ancient writers, the Phrygians were a people of advanced accomplishments for their time, in both the technical and artistic sphere. They are credited with such innovations as bathing bowls with raised bosses in the center, fibulae, tapestry, and superbly crafted and inlaid wooden furniture.

Of the monuments in Phrygia of the Mountains, without a doubt one of the foremost and most typical is Yazilikaya. One of the routes to Yazilikaya from Eskisehir is via Seyitgazi, which was a major trade road in antiquity.

On this road is Doganli Castle, which in the 1800s was a landmark for travelers. The name means Castle of the Falcon, due to the fact that the upper part of the castle resembles a falcon’s head. There was a settlement here during Roman and Byzantine times, and under the latter, a small chapel was built. Near Yazilikaya are other monuments, including two of importance near the village of Cukurca. One is Gerdek Kaya, a monumental tomb consisting of two linked chambers, with a triangular pediment supported by two Doric columns on the east face.

Arezastis is one of the best-preserved Phrygian monuments in the region, lying two kilometers from the village of Yazilikaya. It is carved with an elegant finial decoration or acroterion. The name of the monument comes from the words ‘M?TEP?N ?PEZ?NTIN’ carved on the facade, which can be read but not as yet understood.

The road goes on to the village of Yazilikaya and the Tomb of Midas. The second route to Yazilikaya from Eskisehir is via Cifteler and Han. The plateau beside the village is covered with ruins known as the City of Midas, on the eastern side of which is a vertical rock face 20 meters high and 400 square meters in an area carved in the form of a pedimented facade, with geometric decoration, an elegant acroterion and Phrygian inscriptions which palaeographers have not yet succeeded in deciphering. From the style, this great monument is dated to around 600 BC.