The earliest known burials were carried out by Neanderthal man who lived between 150,000 and 60,000 years ago. These early human beings discovered how to use tools and control fire, and that they also buried their dead was proved by excavations in the Zagros Mountains in northern Iraq in the 1960s. Analysis of soil samples from burial sites revealed that they painted the dead body with earth pigments and placed hundreds of flowers around it. The light had been thrown on the oldest funeral ceremony in the world.

Ideas of reincarnation and immortality are found to have existed in various guises amongst all human communities. These ideas gradually developed, and different ceremonies arose to mark the momentous event of death.

This was reflected in the human desire to structure the place where the dead would be laid for their eternal rest.

This region is one of the loveliest in Turkey, and the rock tombs enhance the spectacular landscape. It is for these that Lycia is most famous.

Lycia’s rock tombs were first discovered by travelers and archaeologists at the end of the 18th century, and the publicity they received in books and journals attracted an increasing number of sightseers and researchers over the next two centuries. The Lycians lived an insular existence in their remote mountainous land and were fierce in defense of their independence. Theirs was the last part of Anatolia to be incorporated into the Roman Empire and their native language has still not been deciphered.

The major cities of Lycia were situated on the coast or in the Ksantos Valley, in locations relatively easy of access compared to the wild mountains. 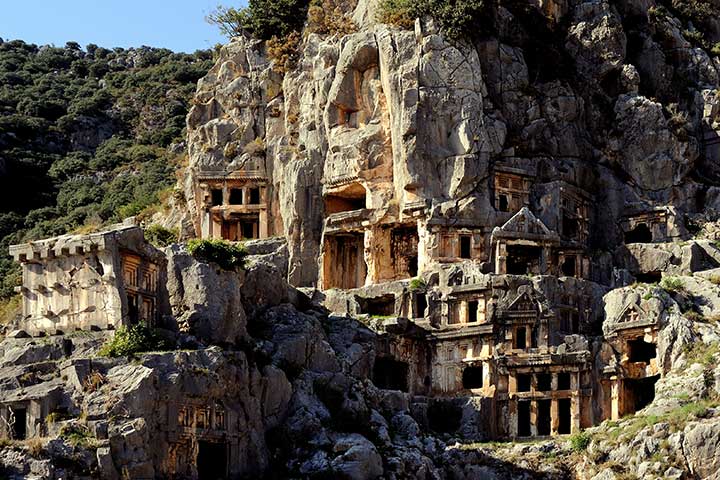 Archaeologists estimate that the ancient population did not exceed 200,000. As stone masonry, the Lycians excelled, as shown by their tombs, most of which pre-date Alexander the Great’s conquest of Anatolia in the 4th century BC. The tombs resemble temples and were carved into cliff walls in the most inaccessible places. The mountains of the region consist largely of limestone, which is relatively soft and easily worked, and this probably explains why no comparable numbers of rock tombs are found elsewhere.

The tombs generally have two Ionic columns on the facade, surmounted by an architrave and a pediment. Behind this facade, the rock is carved out to form an inner facade, in which a portal leads into the burial chamber. Within are stone couches on which the dead were laid and gifts left for them. The number of these couches varies according to the size of the burial chamber.

On the outer facades of some of the tombs are carved reliefs depicting the dead person or important events of the time. Scenes showing funeral feasts known as symposium scenes are common. Mythological figures and heroes also feature in these reliefs, particularly Bellerophon, who with the help of his winged horse Pegasus killed the Chimaera, a three-headed, fire-breathing monster which had terrorized the people of the region.

In certain places, there are so many rock tombs that entire cliffs are honeycombed with them, and in some areas, as many as two thousand are to be found in close proximity.

The precious grave goods placed in the tombs were too much of a temptation to robbers to have survived to the present day. Indeed, that robbery of the tombs began in antiquity is indicated by the fact that curses were carved on many of them as a deterrent.

The curses warn vandals of severe punishment by the gods if they should desecrate the tombs or dare to use them for other purposes. But if the gold and jewels have long since gone, the imposing and timeless tombs themselves have remained to become an inherent part of this spectacular landscape.