When the 17th-century Turkish writer Evliya Celebi, who traveled throughout the Ottoman Empire recording everything he saw, visited Malatya he remarked upon the plentiful water from numerous springs, the good air, and the orchards and vineyards in the green plain, and said that this was a city which aroused the admiration of all those who traveled there.

Malatya is a city encircled by the Beydaglari range of mountains – an extension of the Toros and its position on the road linking Anatolia to Mesopotamia meant that it was settled at a very early stage in history. It saw many civilizations come and go, including the Hittites, Assyrians, Romans, Persians, Arabs, Seljuk Turks, and their successors the Ottomans. Assyrian tablets unearthed at Kultepe and dating from the early 2nd millennium BC give the name as Melita, while the Hittites knew the city as Maldia meaning honey, the Romans as Melite or Melitene, the Persians as Aspozani, the Arabs as Malatiyye, and the Turks as Malatya.

Of all the crops grown on the fertile green plain of Malatya, the most celebrated one is the apricot. In recent years, the cultivation has expanded still further, and at the end of June when its orchards turn golden yellow the busy work of picking the ripe fruit begins. Seasonal workers from Adiyaman pour into the province with their families, laden with quilts and the other possessions they need to camp out in its orchards for the next month. The orchards take on a festive colorful air as tents are set up and fire lit for cooking. Tired after a hard day’s work they sleep early, to be up at dawn the following day. The women are out and about first, cooking breakfast and completing the day’s domestic tasks so that the family starts work on time. Young women with babies sing them to sleep in hammock cradles slung between the fruit trees.

The work begins in June and carries on at the same hectic pace to the end of July. Canvas sheets are spread out beneath the trees and the fruit is shaken to the ground. It is packed into cases and taken to be treated with sulfur. After 36 hours the apricots are laid out on plastic sheets to dry for two days. Then they are stoned and pressed flat, and laid out in the sun again for another two days.

Sulfur treatment reduces the drying time, preserves the natural color of the fruit, prevents weevils, and lengthens the time that the apricots will keep. Over 80 percent of this fruit is grown in Malatya and is treated with sulfur before drying. The dried ones, known as “gun kurusu” at this point, are stored for sale to factories where they are cleaned, washed, dried again and packed. 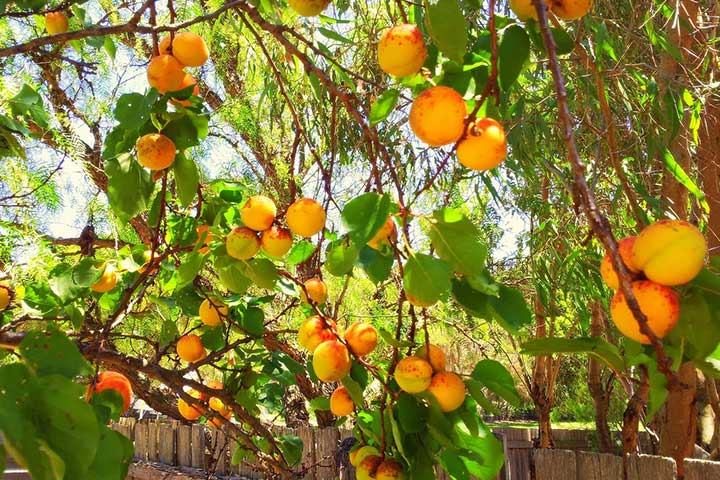 Malatya is the largest producer of this fruit in Turkey, which in turn is the largest producer in the world, so Malatya is, in fact, the world champion. They are a native good of Turkistan, an ancient region encompassing Central Asia and western China, and were introduced to Anatolia at the time of Alexander the Great’s campaigns in the 4th century BC. Here the fruit flourished in the climate and soil of its new home. In the 1st century BC during the wars between Rome and Persia Armenian merchants carried the apricot to Greece, from where it found its way to Italy. But it was to be many centuries before it ventured further into Europe, reaching Spain and England only in the 13th century, and France and America in the 17th century.

Turkey accounts for nearly 15 percent of the world’s production of fresh ones. Most of it is produced in Malatya, Erzincan and Elazig are dried, while they are grown in other regions of Turkey are mainly sold fresh. Turkey’s dried apricot production is between 80 and 90 percent of the world’s total. Seedlings grown from the stones of wild ones (zerdali) are used for the propagation of it, and in August these seedlings are grafted. There are a huge number of varieties of cultivated apricots in Turkey, the most common being the Hacıhaliloğlu, followed by the Soganci, Hasanbey, Cologlu, Cataloglu, Sekerpare, Yegen, Hacikiz, Pasa Mismisi, Turfanda, and many others. The Hacihaliloglu, Soganci, and Cataloglu crops are grown for drying, and the others as table apricots.

Malatya Apricot Festival has now grown over the years into a memorable event held between 17 and 31 July. If you happen to be in Malatya during those two weeks do not forget to visit the orchards around Karakaya Dam in particular. Here you can taste the jam being made outdoors in cauldrons and filling the air with its delightful aroma, and taste the diverse varieties of apricots grown in the region, while at the same time enjoying the spectacular setting on the shores of the dam lake, at the foot of the high Beydaglari Mountains.

How to Tell if The Dried Apricots You Bought Are Still Good or Bad?

If there are exaggerated bruises on it and a rotten smell, then stay away from those. Top qualities can survive for six months and if you store them in the deep freeze or refrigerator; you will have added another 6 months.