In the foothills of the Akdag Mountains in southwest Turkey are the ancient ruins of Tlos. In a region dotted with so many ancient cities, Tlos is overshadowed by Patara, Xanthos, and others nearer to the coastal resorts of the region, yet this fascinating city in a splendid state of preservation deserves to be better known. To reach Tlos from Fethiye, head east to the inland town of Kemer, and then take the south road. As you climb towards the village of Yaka you will see the ancient city gleaming like a crown on a high rocky hill. From this summit, surrounded by deep valleys and precipices, there is an unforgettable view over the valley of the Esen River, Baba Dagi (Mount Kragos), and beyond to the sparkling Mediterranean. Eastwards is an equally beautiful vista of the perpetual snow-capped peaks of the Akdag Mountains, the ancient Massykitos.

Tlos first became known to the world of archaeology after Sir Charles Fellows came here in 1838.

Describing this view he wrote in his notebook, ‘In a single word, magnificent!’ All around are forbidding mountains, sun-roasted rocky cliffs, rushing streams, forest, and lower down in the Xanthos Valley, rich fertile soil. The hilltop acropolis, the heart of the city, is surrounded by steep slopes that would have been easily defendable, so it is no surprise that it was chosen as the site of a castle built in the 19th century. Below the castle are lyican, carved in the form of houses or temples. With its ancient bath and theatre, Tlos still seems to rule over the valley beyond. The city was one of the largest and most powerful in the region of Lycia, which stretched from Fethiye to Antalya, and like the earliest known remains discovered so far date from the 5th or 4th century BC. It appears, however, that the Lycians had settled here long before they were mentioned in the 14th century BC Hittite tablets as the Lukka. The Hittite king Suppiluliuma conquered the region but was unable to keep the rebellious Lukka under subjugation. The tablets mention a Lukka city called Dalawa, which in Lycian was wala, and to the Greeks became Tlos. Despite efforts to discover more about the history of the city, Tlos has guarded its secrets closely. The name is mentioned only in a few inscriptions and by a few ancient geographers, but by piecing together these tiny scraps of information historians and archaeologists have ascertained that the city played an influential role in the history of Lycia. Lycian cities were ranked according to their importance and status, and this rank determined how much tax they should pay and whether they had one, two or three votes in the Lycian League. Tlos was one of only six Lycian cities to command three votes when their representatives convened to discuss political and economic policy and matters of war and peace. This system of representative government meant that the Lycians enjoyed greater unity and stability than the Greek city-states, which at this period were constantly at war with one another. 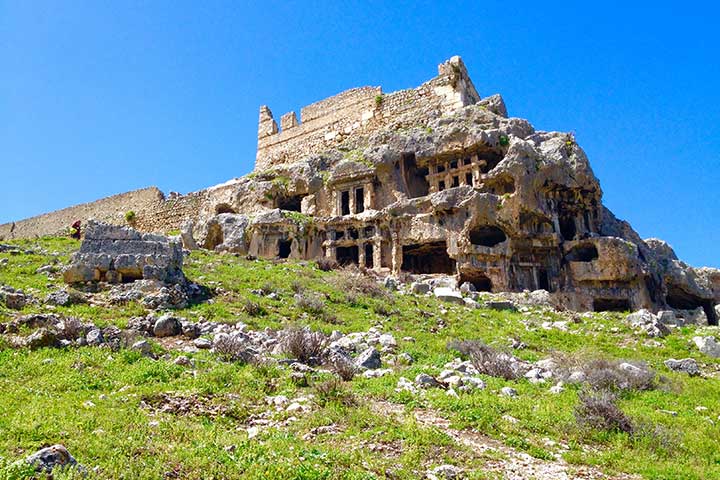 According to the ancient author Panyasis, the people of Tlos were the children of the nymph Praxidike and Tremile, and the Tlosians described themselves as the Tremili in recognition of this mythical origin. Herodotus says that the Lycians came from Crete, and were led into their new homeland in Asia Minor by Sarpedon. Homer is the first writer to use the name Lycia, and the Iliad describes Sarpedon and his soldiers as brave warriors who fought on the side of the Trojans.

In their mountainous land, the Lycians preserved their own distinctive architecture and culture the longest of any other people of ancient Asia Minor. They resisted Greek domination and were the last people to succumb to Roman rule.

Lycian tombs, in particular, illustrate the original character of their culture. A 4th century BC rock tomb at Tlos with a temple façade and relief sculpture of Bellerophontes at the entrance is one of the most remarkable Lycian monuments. Bellerophontes, who is depicted upon his winged horse Pegasus, was a mythological hero from whom the Lycians also claimed descent. According to this legend, Bellerophontes arrived from Greece and was received as a guest by the Lycian king Iobates. The hero and his horse Pegasus killed the fire-breathing Chimaera, with its two heads – one a lion and the other a snake – and tail of a goat. He afterward married the king’s daughter and became king of Lycia. 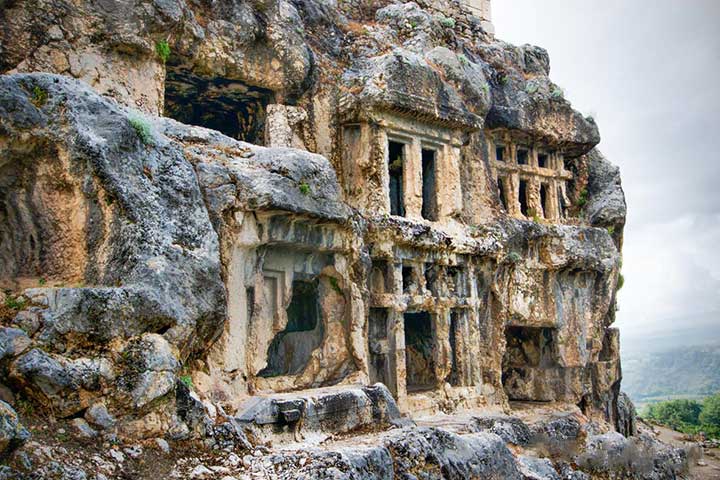 The people of Tlos nurtured strong loyalty and affection for their mythical kings, Bellerophontes, Iobates and Sarpedon, whose names were given to settlements governed by Tlos mentioned by the ancient writer.

One of the monuments in the city may eventually throw further light on its history. The surviving fragments of this monument bear reliefs depicting battle scenes and the conquest of a castle or city, which some researchers believe must be Tlos itself. The carved inscription on the monument is in Lycian, an Indo-European language which has not yet been deciphered, and which continued to be used until the time of Alexander the Great. The word Izraza is frequently repeated in the inscription and is thought to be the name of a person, but their identity as yet remains a tantalizing mystery.