A sound echoing in the streets reminds us of cold winter nights in our childhood. With their familiar call of ‘Boza!’ street sellers carrying large metal jugs walk Istanbul’s streets in the evenings, bringing a delicious traditional drink to our doors. Sadly, masters and sellers are becoming rare today. It is a cold drink made from fermented grain and has a wonderful slightly acidic sweet flavor.

The History of Boza

It is a drink of great antiquity, first originating in Mesopotamia 8000 – 9000 years ago. The Greek historian Xenophon records that it was made in eastern Anatolia in 401 BC, and stored in clay jars that were buried beneath the ground. This local specialty remained confined to the region, however, until the arrival of the Turks, who took to this nourishing drink and spread it far and wide under the name boza, a word deriving from the Persian buze meaning millet. It enjoyed its golden age under the Ottomans, and it making and selling this beverage became one of the principal trades in towns and cities from the early Ottoman period.

Until the 16th-century, it was drunk freely everywhere, but the custom of making the so-called Tartar boza, laced with opium brought the wrath of the authorities down on the drink, and it was prohibited by Sultan Selim II (1566-1574). In the 17th century, Sultan Mehmed IV (1648-1687) prohibited alcoholic drinks, in which category he included this one and closed down all the shops selling this drink. The 17th-century Turkish writer Evliya Celebi tells us that it was widely drunk at this time and that 300 shops were employing 1005 people in Istanbul alone. He also describes a type of non-alcoholic sweet one of a milk-white color made for the most part by Albanians.

At this period, it was widely drunk by janissaries in the army. It contained only a low level of alcohol, so as long as it was not consumed in sufficient quantities to cause drunkenness, it was tolerated because it was a warming and strengthening beverage for soldiers. As Evliya Celebi explained, ‘These boza-makers are numerous in the army. To drink sufficient enough to cause intoxication is sinful but, unlike wine, in small quantities, it is not condemned.’ 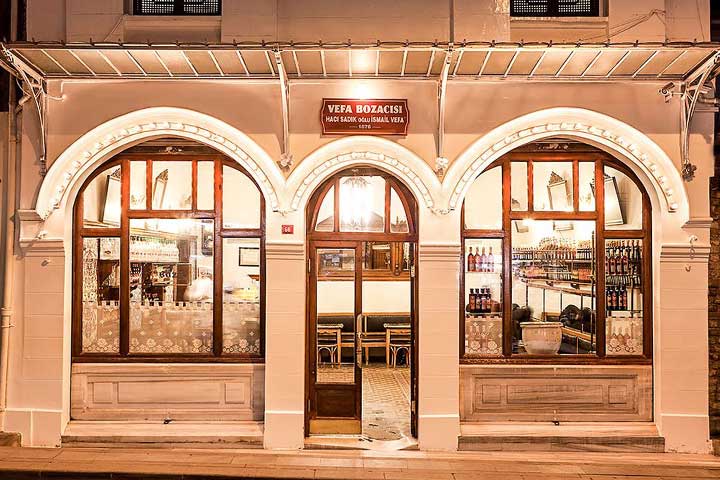 In the 19th century, the sweet and non-alcoholic Albanian one preferred at the Ottoman palace became increasingly popular, while the sour and alcoholic type of it that had generally been produced by the Armenians went out of favor. In 1876, Haci Salih Bey established a shop in the Istanbul district of Vefa, close to the then center of entertainment, Direklerarasi. The one they make, with its thick consistency and tart flavor, became famous throughout the city and is the only shop dating from that period still in business today. The firm is now run by Haci Salih Bey’s great-great-grandchildren. Vefa, as it is known, is made only from hulled millet, which is boiled in water and then poured into broad shallow pans. When cool the mixture is sieved, and water and sugar added.

A small quantity of mature one is then stirred into each batch, and the mixture left to ferment. When small bubbles appear, it is ready.

It is produced in most Turkic regions, but not always using millet. The flavor various according to the cereal which is used. In Kirghizia, for instance, it is made with crushed wheat, in the Crimea with wheat flour, and Turkmenistan with coarsely ground rice meal. In a scientific study carried out by the Turkish Science and Technology Institute for Vefa Bozacisi, the drink was found to be extremely healthy and nourishing. One liter of it contains a thousand calories, four types of vitamins A and B, and vitamin E. During fermentation lactic acid, which is contained in few foods, is formed, and this facilitates digestion. 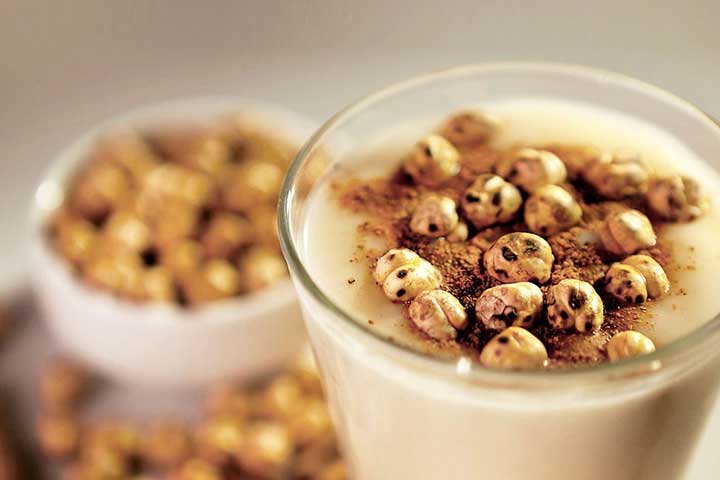 In the past, it was drunk in crystal glasses with silver mounts and sprinkled with ginger, but today it is customary to use cinnamon instead and to serve it with roasted chickpeas.

An Easy Recipe of Boza Drink

For readers who would like to try making it at home to enjoy on cold winter evenings, here is an easy recipe. All you need is two cups each of bulgur wheat, water and sugar. Soak the bulgur overnight in water. The following day, add two cups of water and cook it over medium heat. Pass through a wire sieve, and then stir in two cups of sugar. Leave to ferment for three days, and when bubbles form on the surface, it is ready. Since it is drunk cold you can pour it into mugs immediately and sprinkle with cinnamon. Put the remaining in the refrigerator, where it will keep for several days.

But if you do not have the patience to wait so long for your boza, then listen out on winter nights to the cry of ‘Boozaa!’ ringing through the cold air.