The ‘Islamic’ label accorded by the media to the kind of global terrorism that the world is currently facing has had a misleading effect. Whereby certain nations that are as safe, if not safer, than the West, and that enjoy social stability that would be judged as enviable even to Western standards, have been unjustly labeled as dangerous to various degrees in the minds of some travelers, without any objective reason for it, just on the grounds of their religion or cultural background.

Let us Discuss the Example of Morocco

The history is one of constant commerce of goods, ideas, and people with Europe, to which Moroccans feel culturally closer than to Syria, Iraq, or Libya, for instance; and this to begin with because only 8 miles separate Morocco from the shores of southern Spain Spanish is widely spoken in the North of the country, which has a strong Andalusian flavor. Marrakech is some 1,370 miles closer to Berlin in Germany than to Aleppo in Syria.

Secular, non-religious, and Western lifestyles are visible in all major cities. For example, a percentage of the locals consume every year hundreds of millions of liters of locally and legally produced wine and beer, whilst the rest stick to the Islamic ban on alcohol. But both groups behave in the understanding – deeply rooted in Moroccan mentality – that freedom is the most valued gift from God, and that one has no right to interfere in the freedom of others.

I think, in addressing the question of traveling to a Muslim country, the attitude of locals towards the presence of foreigners in their land is key, and a reliable indicator of how things stand in such country with regards to terrorism. In Moroccan culture, the laws of hospitality are sacred to the point that a host is held responsible, by the rest of the community, for the life and welfare of his guest – regardless of the guest’s race or beliefs. Moroccans regard travelers and foreign residents as guests in their country and for this, every honorable citizen takes the safety of travelers in Morocco as a point of personal honor.

The number of Westerners living in Morocco is huge – some 87,000 were estimated in 2014. I am one of them, and all I can say is that I feel perfectly safe here and that I have never felt that I was being hated or despised because of my non-Moroccan origins – rather the opposite!

Tensions between the different faiths are non-existent in the country. Jews and Christians are free to pursue their beliefs and live in peace with their Muslim neighbors. There are even local Jewish saints that are also revered by Muslims in co-joined ceremonies. The only Jewish Museum in the whole of the Arab world is located in Casablanca, and the Jewish quarters and synagogues in the main cities are currently being renovated with public funds.

Look at the number of cases of profanation of Jewish cemeteries in the country over the last, let’s say, twenty years: ZERO – and compare this figure with that of laid France, the USA, or Germany, for instance. 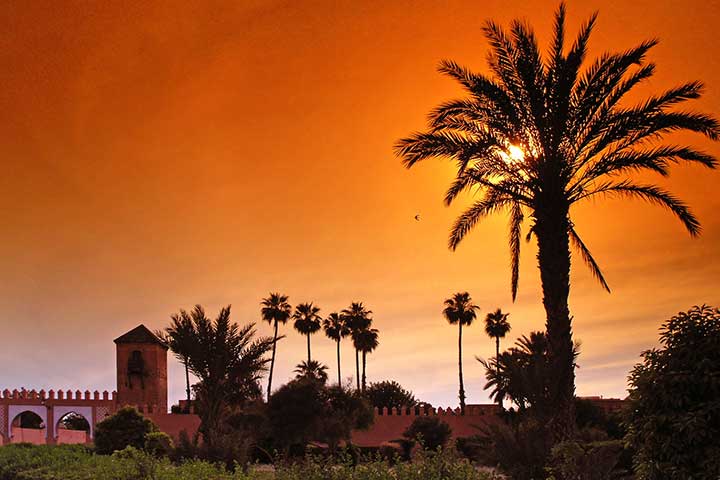 You may be surprised to know that it is the only country in the world which acknowledges, in its Constitution, its Jewish heritage as a co-substantial part of its national identity. And it was also the first country in the world to acknowledge the independence of the United States of America, back in 1777 – yes, Morocco is America’s oldest ally.

Last November, in an official statement, it was described by the British Foreign Office as ‘one of the safest countries in the world to travel to’. Very recently France’s Foreign Affairs Ministry spoke in the same sense, adding that, in any case, it was currently ‘the only safe North African country to visit’. Morocco has been, indeed, the only country in the Middle East/North Africa region to avoid coming under a terrorist attack last year. The current level of alert for Morocco is lower than that according to countries such as Spain, France, or the UK. Not equal, not higher: lower.

Gun crime is unheard of; the mere possession of a gun carries an automatic sentence of 25 years in jail. Put it this way: the number of casualties by a mass shooting in Morocco over the last several years is ZERO. Compare this to the shooting incidents that plague the US with regularity, for instance. Statistically, it is much safer than any American or European big city and definitely, one is much, much more likely to die in a shooting in the USA than in Morocco, where access to firearms is restricted to the police forces and the army only, and members of these bodies must account for every single bullet shot. Yet some Americans cancel their trip to Morocco on the grounds of safety!

The fact is that the Moroccan security forces and intelligence services are amongst the best in the world concerning global terrorism. This has been acknowledged by relevant world leaders including Barack Obama and the French, British and Spanish Prime Ministers, who have praised the continuous and unconditional cooperation of the security forces with their European and American counterparts, cooperation which proved instrumental in the dismantling of several terrorist cells in the West before they were able to carry out any attacks. As you can imagine, the level of efficacy of these forces on the soil is even higher; and they enjoy the support of the local population.

It was one of the very few Arab countries that remained stable throughout the so-called ‘Arab spring’ and afterward, and this due to the massive support that the Moroccan King enjoys the part of the local population, who acknowledges his efforts to modernize and democratize Morocco, grant equal rights to women and ethnic minorities, and fight poverty and illiteracy.

This coming November, the city of Marrakech will host the 22nd Conference of Parties to the UN Framework Convention on Climate Change, an event that several world leaders and dignitaries will attend. Ask yourself, would the UN risk the safety of their political and diplomatic elite by choosing an unsafe country to host an event of this magnitude?

The way events have unfolded over the last few years has taught us that unfortunately, terrorist actions can happen anytime, anywhere. Still, the chances of getting trapped in a terrorist action at a given time, in a given place, are minute when compared to those of dying in a car accident in our hometown, or even to those of being struck by lightning; yet we drive our cars every day without feeling any particular apprehension.

We should try and make sure that our reactions to the danger of terrorism are logical and proportionate. Fear is what terrorists want us to feel because fear is irrational. We should not let our lives be governed by it when objective data shows that the chances of dying in a terrorist attack whilst traveling are so remote and negligible.

If we manage to keep a rational sense of perspective, we will have won half of the battle.
You may like to read more about the real risk of terrorism compared to other risks in this excellent article by Andrew Shaver about safety which appeared in The Washington Post.