Istanbul is a city that connects Eastern and Western cultures. It’s the only city in the world where people have worshipped in peace in mosques, synagogues, and churches peacefully. The cities multi-cultural history and respect for an individual’s right to worship freely is a model for the rest of the world.

On November 25th, 2001, the city added another place of worship, the Museum of Turkish Jews. The Quincentennial Foundation opened the museum to honor the peaceful relations between the Turks and Jews.

The foundation restored and reopened the Zulfaris Synagogue, which stands on Percemli Sokak in the Karakoy district of Istanbul, as the museum.

What’s in a Name?

The name Zulfaris, along with Percemli, mean bridal curls. The name comes from the street on which it sits. The name arose because brides would walk down the street on the way to the Synagogue to get married. It’s one of the many centuries-old traditions in Istanbul.

In front of the synagogue sits a courtyard with a sculpture by Nadia Arditti called The Soaring Flame. It’s a monument that memorializes the Jewish soldiers of Turkey that lost their lives when defending their homeland in World War 1 and the War of Independence.

Walking up the staircase of the synagogue is to walk along with the memories of countless brides. Their fathers would walk arm-in-arm with them up the stairs and watch their new husbands carry them back down after weddings.

Immediately, visitors see the amicable relationship between Jews and Turks symbolized by an illuminated image of a tallit, or prayer shawl, bearing a star and crescent motif. A touchscreen computer gives visitors information about the various Jewish communities in Turkey throughout the centuries. The Spanish Jews mentioned above from the golden age of the Andalusian period are one of the many communities highlighted.

The Sephardic Jews had to leave Spain after Ferdinand and Isabella issued the Expulsion Edict of 1492. There was a wave of antisemitism sweeping through Europe at the time. In many cases, European Jews were falsely accused of poisoning wells and put to death for crimes they didn’t commit.

These Sephardic Jews dispersed into many countries, breaking up families along the way. The Ottoman Empire and Sultan Bayezid II (1481-1512) believed in religious freedom, trade, and peace. They offered the Jews from Spain a new home and fair treatment and made good upon their word.

Some of the exhibits from this time include the warrant of exemption from taxation. Sultan Suleyman the Magnificient signed the warrant, allowing the Jews of Buda tax relief.

The Edirne Letter, written by Rabbi Sarfati of Edirne, called upon the persecuted Jews of Europe to migrate to Ottoman Turkey for safety. The Jews from Europe became an integral part of Turkish society. The religious tolerance of the Ottomans allowed for free worship, something that was unheard of at the time.

Many of the objects reflect the relationship between the Jews and their new home. They show Turkish motifs on Judaic religious objects. These items are on display next to Torah scrolls. Panels tell the stories of seminal moments in the relationship’s history, such as the story of the Chief Rabbinate in Turkey. Another panel shows the appointment warrant, seal, and medal of Rav Moshe Ben Habib, the Chief Rabbi of Bursa.

The Ehal, the holiest section of the synagogue, is marked by two Torah scrolls, one unrolled, to show the symbolic peaceful relationship that still exists to this day.

The Journey From Spain

The Sephardim left everything they owned when they left Spain. They did bring their rich cultural heritage, dating from the Andalusian golden age, with them. David and Samuel ibn Nahmias established the first printing press in Ottoman Turkey in 1493. In the right-wing of the main hall of the synagogue, a display tells this story.

Another section shows the history of the Jewish press in Turkey. This includes a copy of the Midrash Teilim, a book printed in Istanbul in 1512. There are other examples of the numerous publications throughout the Jewish history of Istanbul.

Another display shows the contribution of Jewish migrants to the musical culture of Turkey. These exhibits show how the two cultures came together, adding to each other. 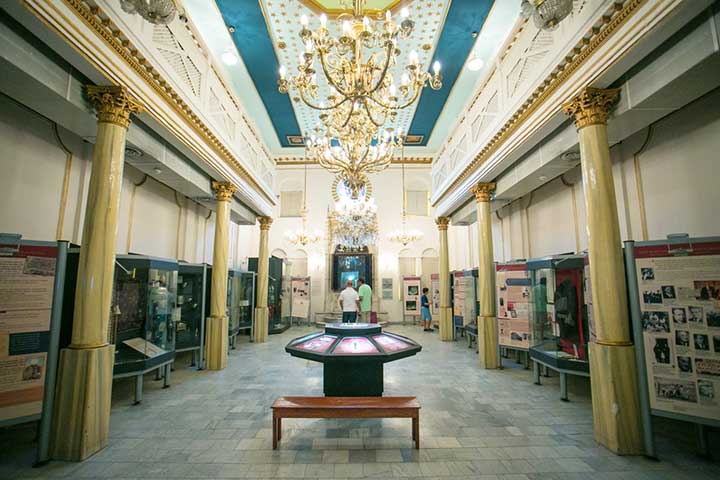 Some panels focus on the scholars that fled Nazi Germany and pursued academic degrees in Turkish universities. There are also stories of Turkish diplomats that saved countless Jews from concentration camps during World War II.

The upper galleries hold displays about Jewish women along with the many celebrations of Jewish people coming to Turkey.

Going down the stairs, you’ll enter the Ethnographic section. This section features depictions of birth, circumcision, the trousseau, and marriage. You’ll see two marriage contracts and photographs of brides and grooms arranged in chronological order from the 1860s to the 1960s.

Before leaving the synagogue, make sure you stop to sign the visitor book and read famous quotes by Turkish leaders.

Explore This Site And Many Others In Turkey

With the size and scope of Turkey’s borders and cultural history, there is something for everyone in the country. With so much to see, it’s important to work with travel consultants that know the best places to go. Whether it’s the Zulfaris Synagogue or The Hagia Sophia, we have the knowledge and experience to make your trip a once in a lifetime experience.

If you would like to explore everything that Turkey has to offer, get in touch with us today. Our expert staff will provide you with the services you need for an unforgettable trip.