I Georgios am the captain of this ship belonging to the Church and priest in that same Church. We set sail from the island of Samos for the Eastern Mediterranean hearing provisions needed by the imperial army warring against the Persians… There are six of us on this journey: I the captain Georgios, Demetrios the helmsman, John the navigator, Leon the joiner and seaman, Leon’s son Michael and our cook Paul. Our ship is 20 meters in length, 5 meters wide and can carry a cargo of 60 tons… We set sail at daybreak yesterday. The sea was calm as we sailed south from Samos under a light northerly breeze. I planned to reach the harbor at Halicarnassos by nightfall. As we approached Myndos I decided to shorten our journey by taking the narrow channel between the islands. I had passed through here without heeding the danger many times before, but this time God was not on our side and a strong westerly wind prevented us bearing round Lodo (Yassiada) near Myndos. We were swept onto the rocks at the western end of the island and wrecked. Before we could unload a single piece of iron the ship sank in 32 feet of water. Thanks be to God all of us were saved. Only Paul’s leg was broken. We are praying for rescue. We spent the night on Lodo, and the cold wind froze us to the marrow.

If the logbook of Georgios Naukleros Presbiteros, captain of the Eastern Roman ship which sank off Yassiada 1370 years ago had survived, it would probably have revealed a story something like this reconstruction of events penned by Bodrum Museum of Underwater Archaeology director, Oguz Alpozen. He has based the story on findings from the shipwreck, which he excavated in 1961-64. The amphoras, lamps, carpentry tools, scales and weights discovered at the wreck site are now exhibited at the Museum of Underwater Archaeology in Bodrum, together with a full-scale model of the ship’s hull.

Bodrum Castle is the most eye-catching feature of Turkey’s most popular resort, but as well as symbolizing this picturesque Aegean town with its whitewashed houses swathed in bougainvillea and narrow streets, the castle houses a unique museum. The museum is not only noted for the priceless exhibits themselves, but for the striking layout which makes a visit here so memorable.

What is more the attractive gardens within the castle walls filled with local flowers and trees is the perfect retreat from the noon heat and crowded streets of Bodrum.

As you enter the castle you encounter two local celebrities, Herodotus, the father of history and the modern Turkish poet and writer Cevat Sakir Kabaagacli. Their busts stand at the gate. Within you find the world’s largest collection of amphoras, which were used in the thriving trade of the Aegean and Mediterranean for carrying various different commodities. The collection begins with the earliest amphora dating from the 14th century BC and goes up to an earthenware water jug made in 1992. Information panels and illustrations explain what the amphoras held, how they were transported and packed on board ship, and other details. They are exhibited under a lean-to roof in the lower courtyard, where there is also a Mediaeval Grocery Shop selling herbs teas, perfumes, oils, natural soap, and handmade pottery. Another interesting place to visit here is the castle chapel which was later converted into a mosque. There are inscriptions on the walls, and the 1/1 scale model of the Byzantine ship mentioned above. Next to the chapel is a Turkish bath dating from 1895, with the typical domed roof pierced by circular lights and traditional washbasins around the walls. One of the most spectacular parts of the Underwater Archaeology Museum is the Glass Gallery containing the world’s finest collection of medieval Islamic glassware recovered from a shipwreck in the area. Each piece is exhibited to maximum effect, lit from below in the half-darkness to reveal the different colors of the glass. In the same section is an aquarium illustrating the tools and methods used for underwater excavations. 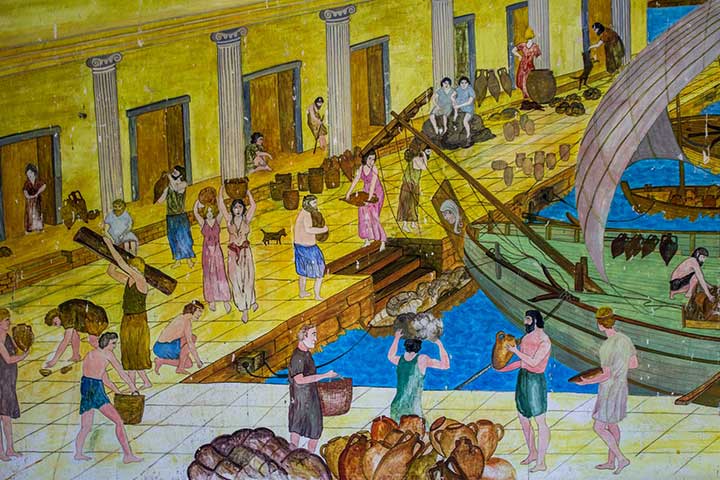 Back on land, we come to the Gallery of the Carian Princess, appropriately designed in the form of a ceremonial room of the Carian period. Here the sarcophagus of Queen Ada, who loved Alexander the Great like her own son. Queen Ada died at the age of around 40 and was buried with her jewelry. Examination of the skull by scientists at Manchester University in England has enabled a reconstruction of the queen’s face to be made, and she awaits visitors dressed in her best clothes.

The English Tower is another section of Bodrum Castle which should not be missed. Constructed in 1415, it was restored in 1980 and now houses a striking example of modern museology. Illuminated by candlelight as it would have been in the past, the room contains a collection of swords, flags, and armor. Medieval music played by a musician in one corner completes the atmosphere. The tower itself is regarded as the most important surviving monument constructed by the British outside the British Isles.

In the courtyard around the tower is another building now in the process of restoration to house the world’s oldest shipwreck excavated by Prof. Dr. George F. Bass and Dr. Cemal Pulak. This three-thousand-year-old ship found at Uluburun was carrying gifts from the Egyptian pharaoh to the Hittite emperor.

Bodrum Castle was built in the 15th century by the Knights of St. John over the remains of an earlier Byzantine and Turkish castle. It has been a museum since 1964, and in 1995 was rated one of the best nine museums in Europe.

Much more could be said about it, but seeing it for yourself is far better. No museum so well brings alive a past when the Hittites, Phrygians, Greeks, Romans, Seljuks, Arabs and other peoples traded far and wide across the Mediterranean.