Four years ago, while digging the foundations of a new building at Yokusbasi in Bodrum, an ancient tomb was discovered. When archaeologists lifted the 700 kilo stone lid of the sarcophagus they saw the perfectly preserved skeleton of a woman.

She was wearing a gold diadem in the form of a myrtle branch and flowers and had been buried with a vast array of treasures. Who was this woman? Was she of noble birth, a princess perhaps? Archaeologist Aykut Ozet was convinced that the skeleton belonged to a woman of royal birth, laid to rest 2313 before. Research proved him right. She was a Carian princess who had eaten and drunk at the same table with such eminent figures as Mausoleus and Artemisia. She may well have met Alexander the Great.

Study of the contents of the tomb revealed that Princess Ada had lived between 360 and 325 BC. Paleoanthropologist Berna Alpagut’s examination of the skeleton showed that she had delivered more than one child, that she had lived on dairy and cooked foods, that her teeth were sound and complete, that she was 1.62m in height and around 40 years of age when she died. 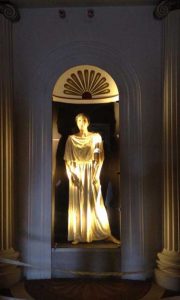 The Halikarnassos (Bodrum) where Princess Ada lived in the 4th century AD differed greatly from the present town. Carian King Hecatomnus had three sons named Mausolus, Idrius and Pixadarus, and two daughters named Artemisia and Ada. When Mausolus became king in 377 BC he married his sister Artemisia. After the death of first Mausolus and then Artemisia, she acceded to the throne in 344 BC. She had not been reigning long before her younger brother Pixadarus, who was not married to his sister and therefore not eligible to inherit the kingdom according to Carian laws of succession, usurped the throne with the help of the fortress of Alinda. However, in 334 BC Alexander the Great brought Ada back from exile and restored her to the throne. From 323 BC until AD 1989, when her tomb was uncovered in Bodrum, nothing more was heard of the once renowned princess.

It was decided to reconstruct Princess Ada as she had looked in life, and her skeleton was taken to Manchester University Medical School by British experts. Dr. Richard Neave, assisted by Dr. John Prag and Dr. Ray Evans, embarked on the task of replacing the flesh on the bones of this two and a half thousand-year-old Carian noblewoman. Since May 1993, she has been on exhibit in a special room at Bodrum Underwater Archaeological Museum with the treasure found in her tomb.

The story of Princess Ada’s life has been related in cartoon strip form on a 24 meter long and 4.5-meters high fresco around the walls of the room. The young artist who has put her history in picture form is Serdar Anlagan. Born in 1968, Sinan University, and is currently doing postgraduate work at the same university.

Wish to discover more treasures of Turkey? Enquire now for a private blue cruise and then we will plan the best.