The road leading east from Tokat towards Almus runs through the valley of the Yesilirmak River, and at a small crossroads, 13 km from the city takes a turnoff into the mountains. Winding through deep valleys, over dry river beds and up steep slopes, it takes you to a medium-sized village set on a bare hillside. At first, Nebi seems like a typical Anatolian village, its cottages with flat or tiled roofs set in yards scattered with agricultural tools, and fenced gardens.

But when you begin to wander around the village, you are struck by the brilliantly colored red, green and purple clothing of the women going in and out of their houses, hoeing the gardens, or carrying water from the fountain. Each one looks as if dressed to enter a folk dancing competition rather than merely go about their daily chores.

While the men are dressed in ordinary shirts, jackets, and trousers, the girls and women of all ages wear the traditional costume known as ucbes, which most sew and embroider themselves. The ucbes consists of several garments worn one on top of the other. A complete ucbes takes three months in all to make, at a cost of around 3000 Turkish Lira (about 600 dollars). The women work at sewing and embroidery in their spare time from domestic chores and during the winter months when there is less outside work to be done. The ucbes has further significance for girls because they are regarded as reached the marriageable age when they have acquired the skill to make an entire ucbes costume without assistance from their elders. 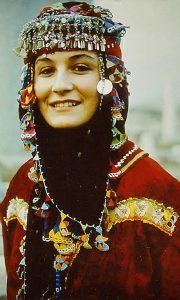 In Nebi it is not only the costumes that reflect the strong sense of Turkmen tradition. Many other customs dating back centuries are still alive here, and this is particularly evident at weddings, one of which we witnessed during our visit. Of course, the customs relating to weddings begin long before the event itself with the request for the girl’s hand in marriage. The prospective groom first sends a member of his family to sound out the situation, and if the response is encouraging his mother and father visit the girl’s family no less than three times to repeat the request before the show of reluctance is dropped and the promise of marriage is given.

The second stage is the engagement when all the men and women of the village gather in the girl’s house. The fathers of the couple kneel down in front of the village elders and other guests and declare their son and daughter to be engaged. Then the bride-to-be kisses the hand of all the guests and stands to wait at one side while the guests are served with the sweet drink known as sherbet. Then it is time for the ceremony of exchanging gifts, the men giving money and the women articles of clothing.

The final and most elaborate ceremony is the wedding itself, which usually lasts three days. The beginning of the wedding is announced by the groom raising a flag on a large pole on the roof of his house. Unlike most Turkish weddings, drums and the pipes known as zurna are not played in Nebi. Many different reasons are given for this custom, but the general consensus is that it is unlucky. Instead, the guests dance to the music of the saz, a long-necked instrument with three pairs of strings. Women and men dance together, the most popular dances being the ellik and semah.

The women dress up in their newest clothes in every color of the rainbow and colored bead jewelry, as if rivaling one another to produce the most dazzling effect. As elsewhere in Turkey Weddings are the best opportunity for unmarried young people to display their charms to prospective spouses.

If the couple being married both come from Nebi then it is a chance to see traditional wedding celebrations at their most vibrant. The bride wears a ucbes and veil she has made herself. If the bride is from another village and arrives in a white wedding dress, then she must change into a ucbes before entering Nebi. The groom generally wears a suit, conceding to tradition by wearing a beaded headdress and a red shawl over his shoulders.

The feasting and entertainments last for three days, ending when the bride is escorted to the house of her husband and gifts are exchanged. On the day after the nuptial night, the new husband is washed in the stream by his friends.

When the wedding is finally over the inhabitants of Nebi, who have preserved the Turkmen traditions they brought to Anatolia from Central Asia many centuries ago, return to their daily routine until the next occasion.