In Greek mythology, Mount Olympus was the home of the gods, and nearly twenty mountains in Anatolia and Greece were given this name. One of these is Mount Tahtali in the Olympus-Beydaglari National Park. Although at a height of 2374 meters the mountain is not of a great altitude compared to many others in Turkey, the fact that it rises with such suddenness from the coast south of Antalya makes it an impressive sight. In its foothills on the shore of the Mediterranean lie the picturesque overgrown ruins of the city of Olympos, stretching down a narrow valley to the shore.

Founded in Hellenistic times, Olympos became one of the foremost cities of the Lycian League, to which it belonged from 168 BC to 78 BC. It was one of only six cities holding three votes in the league. Later the city was razed by Cilician pirates but rebuilt during the Roman period in the 2nd century AD, and most of the ruins visible today date from this period. In the 3rd century attacks by pirates in search of plunder left the city impoverished, and the population dwindled. Later the city enjoyed a brief revival of its fortunes under the Venetians, Genoese, and knights of Rhodes, but was abandoned entirely in the 15th century after the Ottoman navy gained control over the eastern Mediterranean. 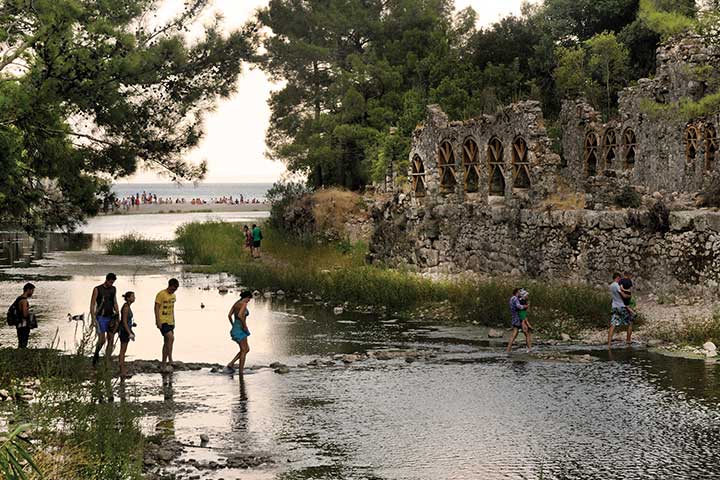 Olympos straddles the Akdere River, which flows from Cirali in the district of Kumluca and winds to the sea through a deep valley between the mountains of Musa and Omurga. The ruins of the city are picturesque and so overgrown that in places the thick undergrowth is impenetrable. In ancient times stone embankments were built along the course of the river to form a canal through the town, and the remains of one foot of the bridge can be seen on the south bank. The north part of the city is today a marsh, with bays, southern nettle trees, figs, and other Mediterranean trees, to which creepers cling in such abundance that it is difficult to force a way through. Here there is a large Roman temple with a splendid portal.

At the foot of the hill to the south of the stream are the remains of a small theatre, beyond it a ruined Byzantine basilica, and on the shore a Roman bath. It is a delightful walk along the banks of the small river in the cool shade of the trees, emerging finally at the edge of the sea. This beautiful stretch of coastline became a national park in 1972. The Olympos-Beydaglari National Park covers an area of 698 square kilometers, encompassing the foothills of the Beydaglari Mountains from Gelidonya Burnu headland to the bay of Yeni Liman. 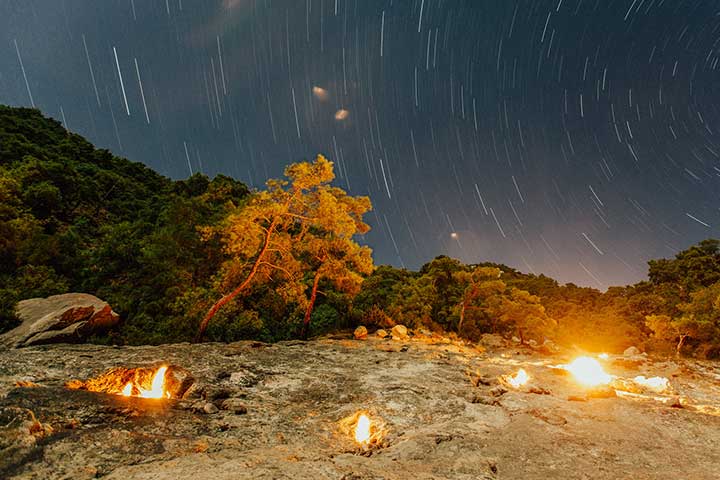 At Cirali, situated at a height of 250 meters northwest of Olympos is the eternally burning fire which gave rise to the myth of a firebreathing monster, called the Chimaera by the Lycians. The fire is known as Yanartas or Burning Stone in Turkish. It is actually burning natural gas, which seeps through a crack in the rock from deep down in the earth. A walk of about half an hour along a narrow path through a forest of red pine (Pinus brutia) brings you to Yanartas. Also within the boundaries of the national park are the ruins of Phaselis, another Lycian port city, and the wild and beautiful scenery of Mount Tahtali. On the cliffs to the north of the Akdere River where it flows into the Mediterranean is a medieval castle. A path runs beside the sarcophagi of the ancient necropolis up to the castle, from which there is a spectacular view over the deep valley between the mountains of Musa and Omurga through which the Akdere winds amongst reedbeds and maquis forest, and of the city of Olympos on both banks.

The coast around Olympos is one of the loveliest spots in all of Turkey and home to a wide range of flora and fauna. The sandy beach is a breeding ground for the loggerhead turtle and is under protection. With its unspoiled scenery and fascinating history, we can plan a wonderful gulet experience as one of the alternative routes and this part of Turkey’s Mediterranean coast is also a perfect place for a beach wedding event.