Hagia Sophia, Topkapi Palace, and the Blue Mosque are the sights that first come to mind when visiting Istanbul. But, there is so much else to see that a few days or even weeks would not suffice for them all. Among them, the Istanbul Archaeological Museum is one that should not be missed. It contains an extraordinary collection, including the first written peace treaty in the world, concluded after the Battle of Kadesh fought between Ramses II of Egypt and the Hittite king Muvatallish in the 13th century BC, the famous earthenware figurines of Myrina, gold coins of King Croesus who minted the first coins in history, and cuneiform Assyrian tablets. But among all these treasures, it is the Alexander Sarcophagus which leaves the most lasting impression on those who see it. 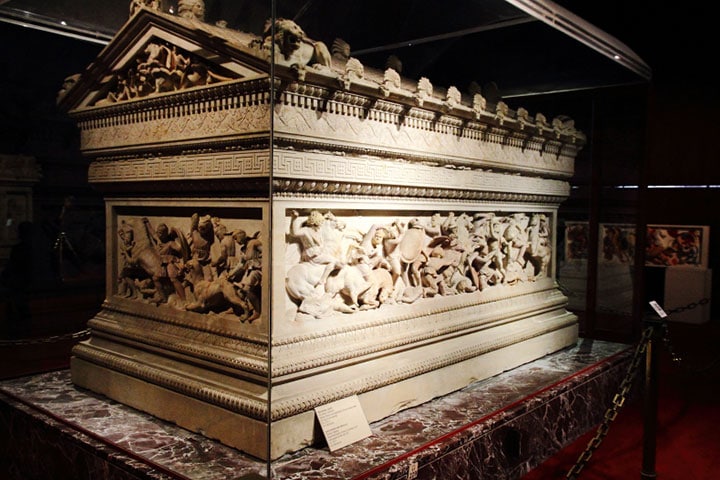 Why it is Called Alexander Sarcophagus?

This great marble sarcophagus with its exquisite carved friezes is called the Alexander Sarcophagus not because it belonged to King Alexander the Great of Macedonia, whose tomb has never been found, but because he is represented in the battle scenes along the sides. Dating from the late 4th century BC, the sarcophagus is a remarkable work of art.

The sarcophagus was discovered in 1887 by Turkish archaeologist, historian and painter Osman Hamdi Bey (whose paintings can be seen in the Louvre and other art museums around the world) while excavating the underground royal necropolis at Sidon in Lebanon. This and the other sarcophagi found here were slid on rails down to the sea, and from there carried by ship to Istanbul. 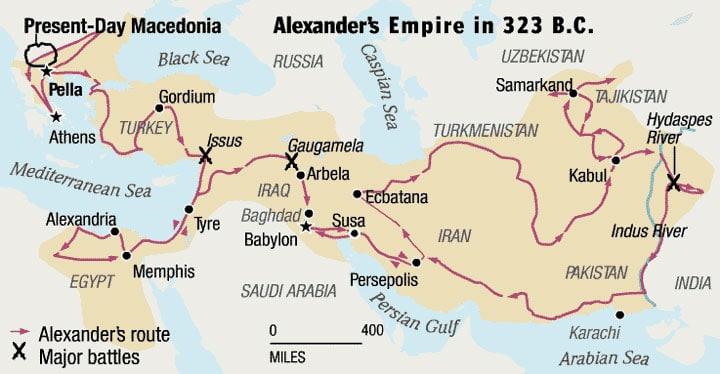 The carving on the sarcophagus is regarded as being among the most exquisite examples of Hellenistic art ever discovered. Along each of the sides are vividly depicted battle and hunting scenes in high relief and astonishingly realistic detail.

Alexander drove the Persians back out of Anatolia and the Middle East in the course of his empire forging campaign which began in 334 BC, and so began the Hellenistic period of Greek influence over western Asia. The influence was reciprocal, however, as towards the end of his life Alexander married Persian princesses, wore Persian dress and adopted the pomp and protocol of the Persian court. How Greeks and Persians were eventually united under Macedonian rule is symbolized by the hunting scene on the sarcophagus in which Greeks and Persians are shown hunting together. 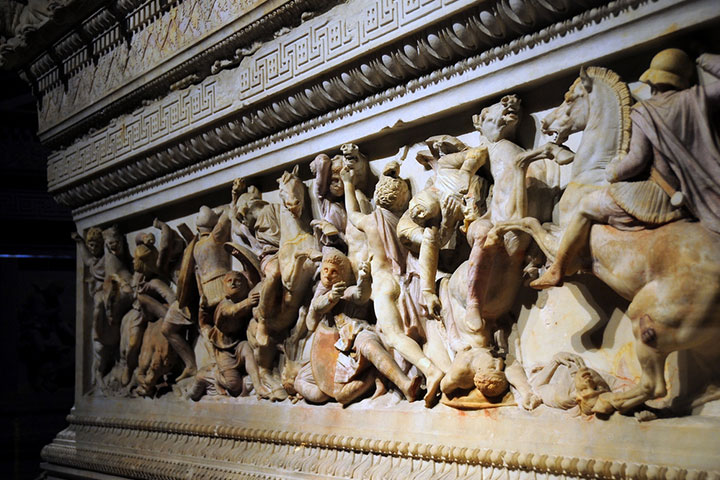 The lid of the rectangular sarcophagus is in the form of a pitched roof covered with tiles resembling fish scales, and there are small carved friezes in the triangular pediments at either end. Traces of paint show that the sarcophagus was once richly painted in bright colors. Beneath the cornice, and along the base and edge of the lid are bands of egg and dart molding, and below these on the base a band of stylized vine leaves. On either side of the lid are gargoyles in the form of lion-griffons.

Studies by the German scholar Volkmar von Graeve have revealed that the sarcophagus belonged to King Abdalonymos of Sidon, and the evidence points to it having been sculpted and painted by Ionian craftsmen living in Phoenicia and influenced by oriental art styles.

The battle scene on one of the short sides represents the Battle of Gazza in 312 BC, in which King Abdalonymos was killed fighting the Macedonians. The other short side depicts the king and his men hunting a panther. One of the battle scenes on the pediments depicts Alexander’s successor Perdikkas being killed in camp during his Egyptian campaign, and the other Persians and Greeks in battle. 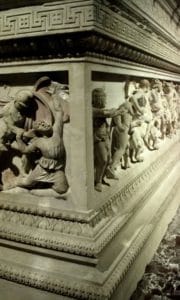 The battle scene on one of the long sides depicts the Battle of Issus between Alexander the Great and the Persians in 333 BC. On the other long side, Alexander and Abdalonymos are shown hunting a lion together. One has only to look at the delicate carving of the horses, lion, boar and other animals in the friezes, and how the taut muscles, distended veins, and other anatomical details are depicted, to appreciate the overwhelming and rare power of this spectacular work of art. It is as if at any moment the frozen scene might burst into life again, the panther spring and the warriors swing their axes. The traces of color which remain are still bright after 2300 years, allowing us to imagine exactly what the sarcophagus looked like before most of the vegetable and mineral pigments wore away. Originally the weapons held by the soldiers and hunters, such as spears, axes, and swords were plated in gold or silver, but grave robbers stripped all this metal ornamentation away apart from that belonging to one of the axes which are now preserved in the Museum. The Alexander Sarcophagus and others discovered in the subterranean sepulcher at Sidon are exhibited in a large gallery of their own, in which the lighting effects recreate the atmosphere of the underground tomb chamber so that they look just as they must have done when Osman Hamdi first set eyes on them.

What Caused His Death

This has been a big debate about getting poisoned, medical diagnostics and more recently even about a medicine called hellebore that produces toxin if overdose. Thus, no one knows the exact reason while Plutarch and Arrian believed that he died of a disease.

How Old Was Alexander The Great When He Died

He was just 32 years old. Upon his death, the empire collapsed and surely, the communities battled for the power.

Among many other achievements in such a short time, he is one of the top-ranked characters in history who is still remembered well and his military strategies are still taught in academies.

Don’t miss our Eclectic Tour of Istanbul to see this wonderful collection including the Sarcophagus of Mourning Women.