The sea around Datca is just as the poet Can Yucel has described: ‘Greener than seaweed when you remain still, and blue when you swim.’ Datca lies on the Resadiye Peninsula, which in geographical terms marks the confluence of the Aegean and Mediterranean. But it is better described as a heaven on earth, a place where the sea shimmers in ripples of seaweed green and turquoise blue, and fish dart in a glitter of silver. Local people say that Aphrodite swam in these waters, and who can deny they may be right. Where else would she have chosen? 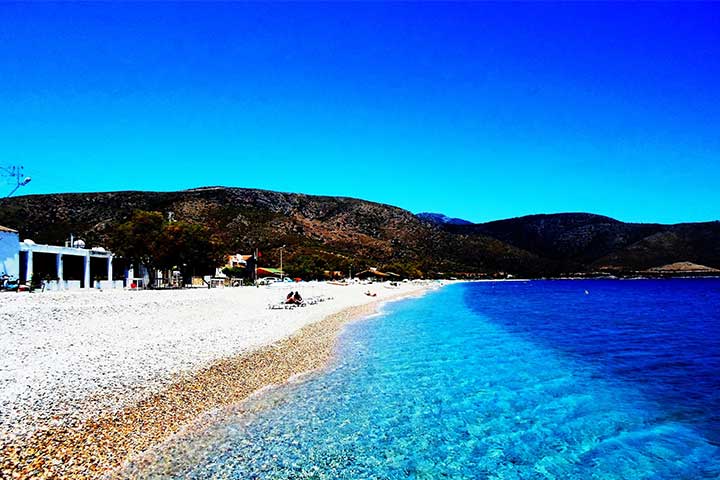 At the western tip of the peninsula is the ancient city of Knidos, where traces of almost all the periods of western Anatolian history are to be seen. The city was first founded in the 8th century BC on the site known as Old Knidos by the Dorians, who migrated eastwards via Rhodes and Syme, arriving at Datca in the 12th century BC. The names of the founders were said to be Triopias of Sparta and Hippotas. Six large Dorian colonies where the cult of Apollo was practiced formed an alliance known as the Hexapolis, but later Halicarnassus withdrew, leaving the cities of Knidos, Cos, Lindos, Kamiros, and Lalysos. Excavations are continuing at Old Knidos, situated at Burgaz, near the present town. When they built their new city of Knidos on Tekir Point, the inhabitants of the old city set out to achieve perfection in every detail. The new site was chosen as ideal for a port that would enable them to increase their share of sea trade in the region. First of all the infrastructure was completed between 365 and 355 BC, temples being built and statues purchased for them. The island at the tip of the peninsula was joined to the headland by a bridge, so creating two harbors to south and north, the larger harbor to the south being used by trading ships and the smaller one to the north by warships. The channel that once connected them is today silted up. There are two theatres at Knidos, both on the mainland. That overlooking the south harbor dates from the Roman period, while higher up is the earlier Dorian theatre. Since the city possessed no sources of freshwater, cisterns to store rainwater were constructed beneath the buildings and a pipeline carried additional water from a spring 12 kilometers away. Paros marble was used in enormous quantities to build the new city. Although this was a time of pantheism, not all the gods and goddesses were held in equal reverence everywhere. The people of Knidos disliked Aries, the god of war, much preferring Apollo, the god of the sun, and Aphrodite Euploia, who was regarded as their particular protector because she had sprung from seafoam, and they were a seafaring people who had come over the sea. When they settled and acquired an affinity for the soil, they also began to worship Demeter, the goddess of fertility. They did not produce the finest wine of the age for nothing; the people of Knidos knew how to enjoy life! They commissioned not one but two statues of Dionysus for their city, and the second statue of Aphrodite depicted naked in Paros marble was made by the celebrated sculptor Praxiteles. So that their new Aphrodite Euploia could be appropriately displayed, they built her a new temple. 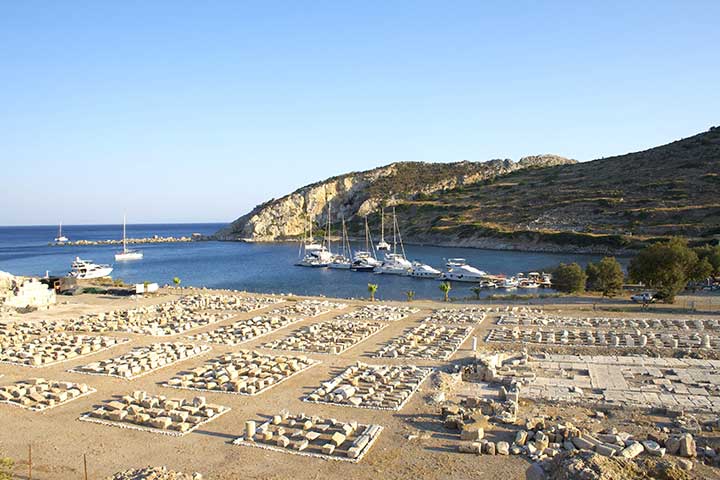 The statue became so famous that merchants and sailors from the four corners of the world called into port at Knidos merely to see it. In the early years Knidos was ruled by tyrants, then from the 6th century onwards by an oligarchy, and from 330 BC by a democracy. Aristotle told his pupils ‘True democracy is in Knidos.’ The Asklepieion here was renowned as a therapeutic center throughout the region, and famous sons of Knidos included Sostratos, the architect of the Lighthouse at Alexandria, and the mathematician, geographer and astronomer Eudoxos, who at the age of 22 met Plato. During the 7th century BC, the population of the peninsula rose to between 70,000 and 80,000, as trade flourished and the fertile land produced abundant crops, particularly grapes. The population consisted of merchants, sailors, potters, farmers, and slaves. The potters produced amphoras for packing the commodities of trade and souvenirs for the many visitors to this famous city. The people avoided war so successfully that the city was neither razed nor burnt for nearly 1400 years. 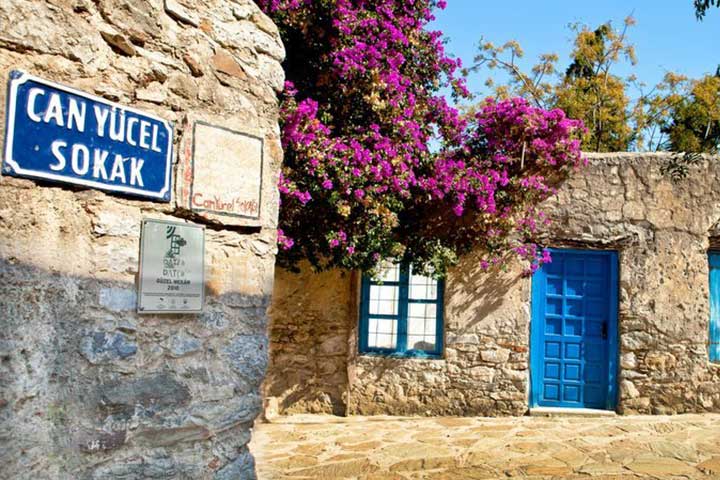 In medieval times, however, the city was plundered, its statues smashed and the treasure in its tombs robbed. The city that had been so full of life was abandoned, and a new town established inland near the old town. Later the Seljuks and Ottomans arrived and settled down with the original inhabitants. Reaching Knidos by land along the rugged peninsula is difficult at present since roadworks are underway, but going by boat from Datca or Bodrum is both easier than taking the winding mountain road and a more appropriate way of approaching this ancient port city which depended for its existence on the sea. From the coast, there are also day trips by boat to the bays of Kargi, Kizilbuk, Palamutbuku, Hayitbuku, and Domuzbuku and you can also discover some of these wonderful coves on a private gulet yacht as few others do. And while visiting, do not miss visiting the inland town of Old Datca, whose narrow cobbled streets and picturesque old houses take you back into the past. The peninsula is also famous for its almonds and windmills.

The poet Can Yucel spent the last part of his life here and his mausoleum can be seen in the town. Before his death, he wrote, ‘Bury me in Datca, my lamb. Pass Ankara and Istanbul by.’