Of all Turkey’s delicious sweet confections, the most famous one is baklava. This exquisitely flavored pastry has been made in Anatolia for long centuries, and its ancestor may be a dish made by the Assyrians consisting of dried fruit sandwiched between two layers of pastry and baked in the oven. The earliest record of it as we know it today locates it in Damascus, from which city it spread to Gaziantep and from there to the rest of Turkey. Exactly when and how this happened is the matter for debate. Nadir Gullu, head of the famous family firm of its makers, Gulluoglu, relates that his ancestor Haci Mehmed Gullu first tasted it in Damascus on his way to Mecca to perform the pilgrimage. He remained there for six months to learn how it was made and introduced it to Gaziantep. In this city, it is made with even thinner layers of pastry and filled with the fine quality pistachio nuts which grow in this region. 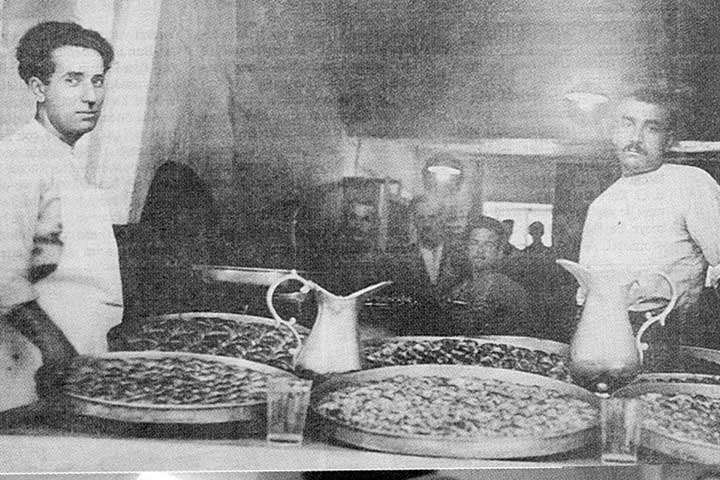 By the 17th century, at least the fame of it had spread to Istanbul since towards the end of that century it was being made by the palace cooks as a special treat for the janissaries in Ramazan. The janissaries carried the trays of this dessert out of the palace in what was known as the procession.

During the reign of Sultan Suleyman the Magnificent (1520-1566), the soldiers had been given a large meal of pilaf, lamb stew and saffron-flavored rice pudding (zerde) before setting out on the campaign, and in time, this tradition was replaced by the distribution of it during Ramazan.

In the Istanbul Encyclopaedia, historian Ilber Ortayli gives this description of the procession: In the middle of Ramazan the sultan, in his capacity as caliph, would pay a ceremonial visit to the Mantle of the Prophet and the other holy relics, which was followed by the Mantle of the Prophet Procession. Following this ceremony trays of baklava prepared in the palace kitchens, one for every ten janissaries, cavalry soldiers, artillerymen and armorers, each wrapped in a cloth, were laid ready outside the imperial kitchens. 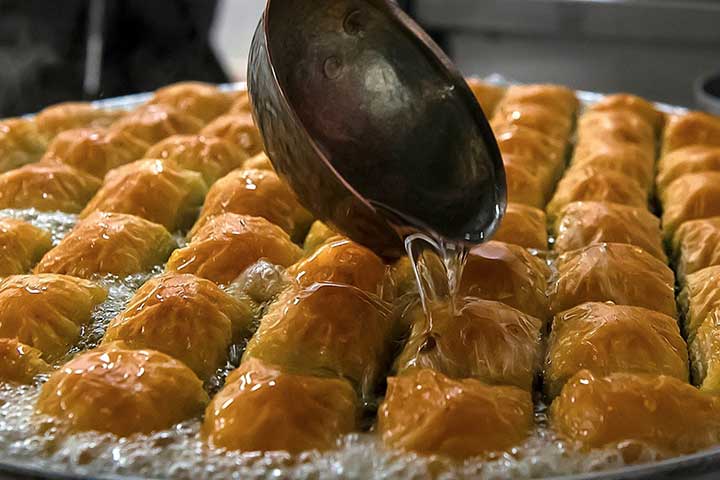 The fit tray was taken by the master armorer and his officers in the name of the sultan, who was himself, first Janissary. After that, the others would be picked up in turn by pairs of soldiers, and each unit with their officers would line up for the parade, followed by the back by the soldiers holding the trays of dessert. They would march out of the palace gate and down the main road known as Divanyolu to their barracks with great pomp and glamour, watched by huge crowds. The following day the empty trays and cloths would be returned to the palace.’

It has spread so far and wide that today it is to be found and eaten with relish in approximately one-fifth of the world’s countries. It is surprising, for example, to find that it is popular in Texas, where it was introduced in the 19th century by Czech migrants.

Less surprising is its prevalence throughout the Arabian peninsula, North Africa, the Turkic republics of Central Asia, Greece, Albania, Macedonia, India, Afghanistan, and Armenia. However, there is an important difference between sweets made in all these countries and that of Turkey – the thickness of the pastry layers. 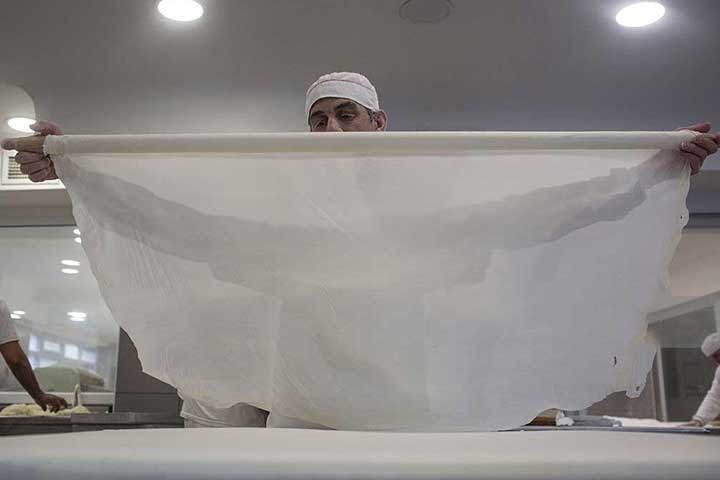 In Turkey, the sheets of pastry are rolled out so thinly that when held up the person standing behind can be seen as if through a net curtain. Elsewhere, a thicker pastry known as phyllo (a Greek word meaning ‘layer’) of the type used in Turkey for savory layered pastries is used for baklava which gives a coarser texture and flavor.

For the initiated, as in many other things in Turkish food culture – eating this delicious dessert has its own rules as well. Separating the top and lower layers or cutting through the lozenge-shaped pieces with a knife or fork is frowned upon. Instead, you should first leisurely survey the glorious sight of it on your plate, then spear a lozenge with your fork in such a way that one-third of the piece is the fork and the other two-thirds are facing you.

This is so that the lozenge does not break into two. The crunch made by the fork as it penetrates the crisp layers is another pleasure that should not be allowed to pass unnoticed. As you lift the piece to your mouth you should halt to savor the fragrance – which should be dominated by the wonderful aroma of cooked butter. Finally, you pop it into your mouth and the experience is complete as the flavor pervades your palate. If there is no crunch when your fork and teeth penetrate it, then it is stale. 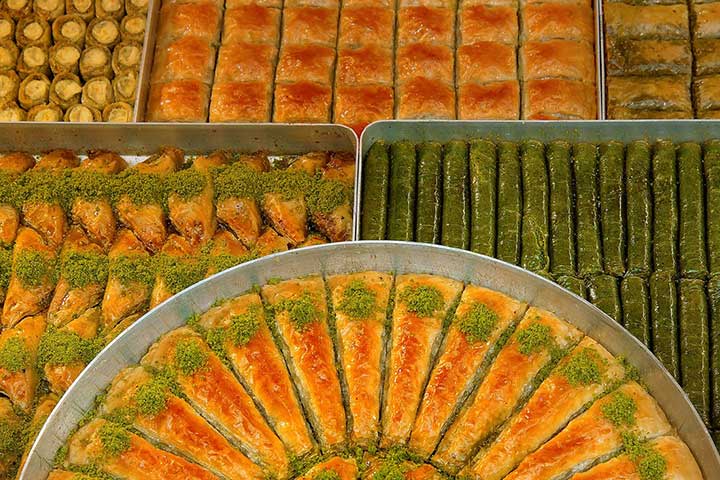 Well made baklava should melt in the mouth, and should not be excessively sweet or syrupy. And if you get heartburn afterward, then change your supplier, because that means they are not using the finest quality ingredients.