The beautiful terraced gardens behind Beylerbeyi Palace used to be known as the Gardens of the Cross because of a cross erected here by Constantine the Great. From Byzantine times onwards, numerous magnificent buildings were constructed here, enhancing the beauty of nature with that of architecture. The sun shone brightly and a gentle breeze was blowing, carrying the salty tang of the Bosphorus waves. A group of Turkish and foreign tourists arrived. They had just finished a guided tour of the two parts of the palace -the private harem and the state apartments -and seen the three halls, six reception rooms and some at least of the 26 smaller rooms on the three storeys. They had walked over the rush matting from Egypt that covers the floors of this summer palace and seen the enormous carpets made in Hereke, kilims, Bohemian crystal chandeliers, French clocks, Yildiz porcelain vases, Chinese and Japanese porcelain, furniture carved with kufi inscriptions, sweeping staircases, richly decorated columns, tall windows giving a glimpse of the sunny day outside, the mingled sounds of past and present and unidentifiable shadows. 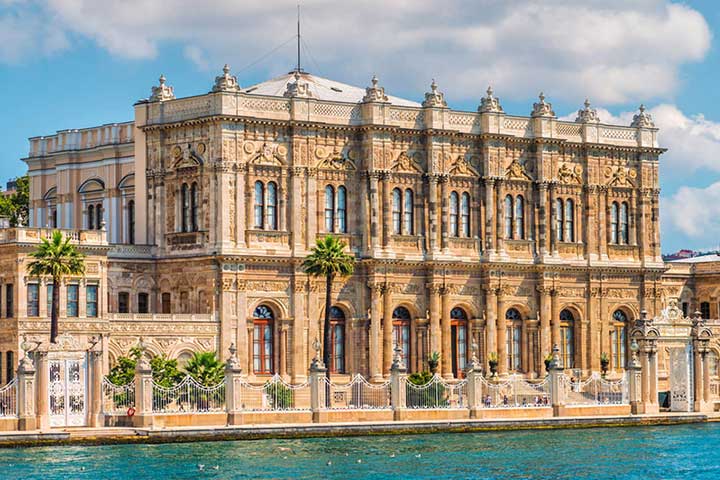 History is concealed in detail. We know they visited the Yellow Pavilion beside the large pool, the magnificent Palace Stables befitting the imperial horses, and the enchanting Marble Pavilion with its pool and fountain. Here the guide had touched one of the columns and explained that these were real marble whereas those in the palace proper were marezzo marble. It is not hard to imagine one of the visitors asking what the difference was, and the guide replied, perhaps, that real marble is a petrified substance that when touched conveys its penetrating coldness, a property that is infectious because marble is real and alive. It took its name from Mehmed Pasa, who was Beylerbeyi of Rumelia during the reign of Murad III (1574-1595).

The former wooden summer palace built in the first half of the 19th century by Mahmud II (1808-1839) burned down in the summer of 1851, leaving only the Marble Pavilion with its delicately carved decoration of shells, seaweed and other marine motifs on the ceiling and walls, and the large pool where swans used to glide. In its place, the present palace designed by Sultan Abdulaziz’s architect Sarkis Balyan was built by five thousand laborers and artisans.

The new stone palace, completed in 1864, is ornately decorated on both the exterior and interior. The painted decoration on the interior walls was the work of palace artists, that in the rooms of Sultan Abdulaziz himself consisting of naturalistic scenes with birds and animals, and richly gilded with gold leaf. No expense was spared in the creation of a modern palace of a splendor befitting the Ottoman ruler. 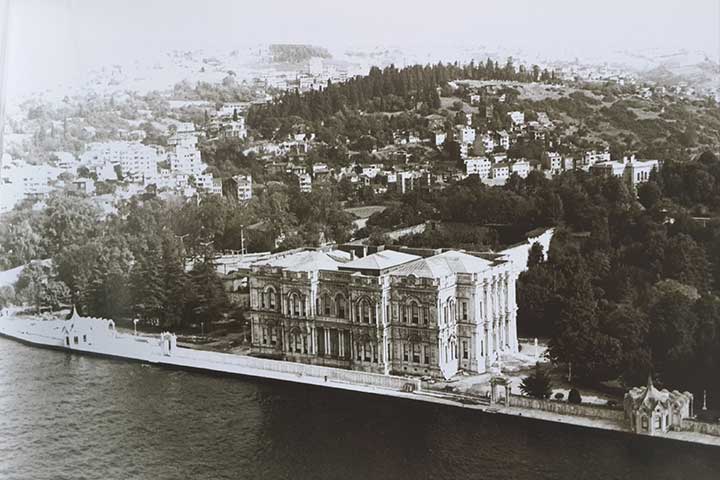 A coal-gas plant was specially constructed on Nakkas Street to provide the palace with gas-fired lighting. Many of the furnishings for both the main palace and its pavilions were imported from Europe. Although the interior has a strong eastern flavor with many traditional Turkish and Islamic motifs, and the layout is typically Turkish, the exterior is westernized in concept, its ornamentation in keeping with western tastes of the time combining eclectic elements from Greek, Roman, Renaissance and Baroque styles.

Over the years several foreign statesmen stayed here when they visited Istanbul, the most famous foreign visitor probably being the Empress Eugenié, who stayed in the palace as the guest of Sultan Abdulaziz in the third quarter of the 19th century. The bedroom she used was number 24 in the harem, and a bathroom was constructed especially for her use. It was also here that Sultan Abdulhamid II spent the last six years of his life, after being deposed in 1909.

The photo shows the stately and ornate Beylerbeyi Palace against the background of the Bosphorus. Beneath the place where you can stand, lies the tunnel through which the old road used to pass, and in the center of the tunnel is a fountain inscribed with the name of Sultan Mahmud II. The tranquil and evocative atmosphere is what you will remember best about Beylerbeyi Palace, through whose rooms and gardens sultans once strolled.

Book a private Bosphorus Cruise tour with Travel Atelier now to include this highlight on your bucket list and if you are doing this already with us; our Asia and Maiden’s Tower tour also cover this beautiful visit.

How to Get There
Beylerbeyi Mahallesi, Abdullahaga Cd., 34676 Uskudar / Istanbul

The Museum Hours
Open daily between 09:30 – 16:00
Except on Mondays and Public Holidays