Topkapi Palace was the splendid home of the Ottoman sultans for 400 years, built by Mehmed II the Conqueror (1451-1481), and from 1478 onwards used both as an imperial residence and the seat of government. Events at Topkapi Palace determined the destiny of the most far-flung parts of the empire. Here decisions to go to war were taken, and the careers of statesmen were made and lost. Today, the palace is a museum where once closely guarded treasures of all kinds are now displayed for all to see. As well as jewels, weapons and holy relics, the exhibits include clothing once worn by the Ottoman sultans.

The collection of kaftans belonging to the sultans is one of the most celebrated collections of Turkish textiles in the world. Sultan Abdulmecid (1839-1861) had cases made for the private display of these kaftans, but these could only be viewed by special permission which was granted to foreign diplomats alone during the late 19th and early 20th centuries. 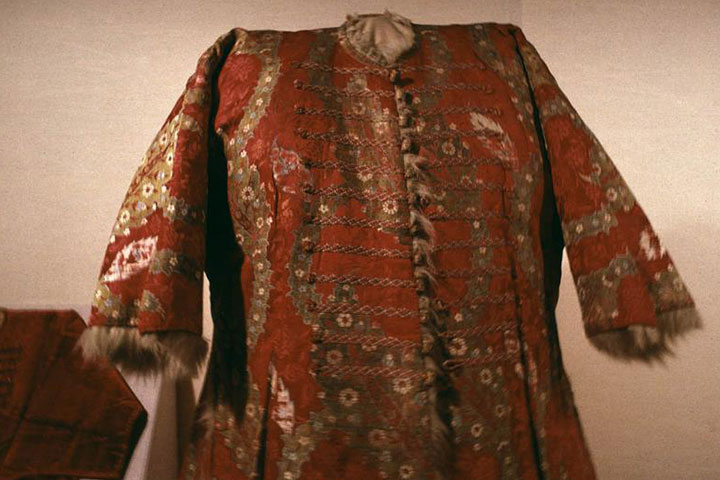 Following repairs to the palace, the kaftans were placed on display in the Hall of the Privy Chamber in 1947, and in 1964 moved to the Hall of Campaign where they can still be seen today. From the 16th century onwards the pages of the Privy Chamber were in charge of the sultans’ wardrobe. Bobovi, who taught music at the palace in the 17th century, described in his memoirs how the kaftans and valuable fabrics were taken outside to air under the watchful eye of the Chief Treasurer. The Ottoman sultans dressed to impress, and wore kaftans made of precious fabrics. Their demand for fabrics of the highest quality played an important role in the development of fabric weaving and design.

The fabrics used both for clothing and furnishing were woven by craftsmen in palace workshops according to designs prepared by palace artists. When the palace weaving shops could not keep up with demand, orders were placed with weavers in both Istanbul and Bursa. Silk fabrics were subject to close inspection and had to comply with strict specifications regulating everything from the number of warp threads to the type of dyes. 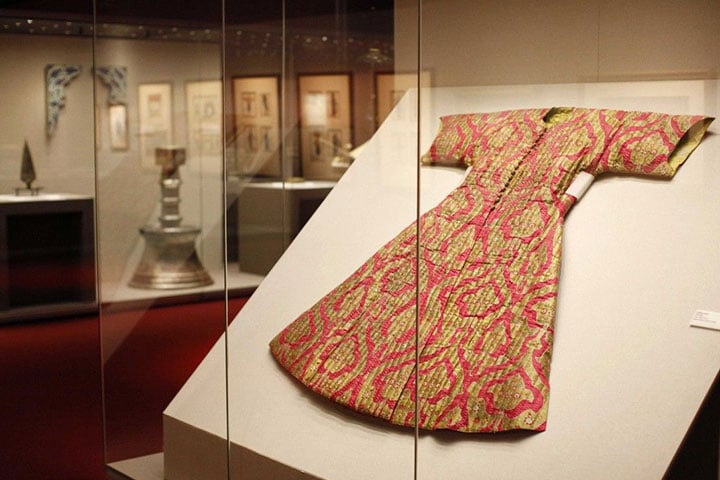 Garments worn by the sultans were regarded as valuables and kept in the Treasury. They were indeed magnificent, made of brocade, velvet, catma (velvet brocade), seraser (cloth of gold woven from silk and wire made of an alloy of gold and silver), diba (satin brocade with gilded thread), satin, taffeta, light silk known as vala, broadcloth, mohair and cashmere. Altogether there are 1550 items of clothing in the Topkapi Palace collection, which owes its existence to the custom of keeping the clothing worn by the sultans following their death.

It was also traditional for private possessions such as clothing to be placed in the mausoleums of the sultans, members of the royal family, and high-ranking statesmen and clerics, and the museum collection includes many such pieces. Most of the royal kaftans are made of silk and cotton fabrics from India, Iran, Egypt, and China. A child’s kaftan made of cream-colored silk damask, a ceremonial kaftan of the same color with a design of small circles filled with dragon-like curving designs, salvar (baggy trousers) whose surface is entirely covered with angular meanders and knee-length drawers with undulating stripes belonging to Suleyman the Magnificent are all evidently made of fabrics of Far Eastern origin. The collection includes an example made from a fabric dating from the last Chinese dynasty, the Manchu Ch’ing, in a design that became celebrated in Europe. There are long-fibred and extremely finely woven Indian cotton and silks, the most interesting of the fabrics woven in India for the Middle Eastern market being two lengths of the dress fabric known as ‘came’.

Several examples of Timurid fabrics displaying a strong Persian influence are among the most striking pieces in the collection. These silks are mainly woven in the monochrome or two-color damask technique, with a design of fine scrolls and lotus flowers. Silks dating from the Safavid period, when Persian art blossomed into the full maturity of style, have motifs in the form of flowers, birds, and butterflies inspired by such popular stories of the time as Leyla and Mecnun and Husrev and Sirin. Among the velvets of this period is a piece of velvet brocade whose design is derived from the story of Husrev and Sirin, and a length of velvet with a repeating design of double medallions one above the other and large lotus flowers.

Each of the kaftans and other garments worn by the sultans and now in the collection at Topkapi Palace has a different story to tell when we begin to delve into their secrets, and the beauty of their designs is enhanced by the fascinating facts which are revealed by the quest to discover their origin.