The Turkish Bath or Hamam is an atmospheric world all its own in the midst of the modern bustling city. Everyone who sets foot in here surrenders to the water in a voluntary form of captivity, for the process of purification of not just the body but also the soul.

Upon entering the door you find yourself in the camekan, a hall lined with changing cubicles. In an old-fashioned one, this is the most impressive part, with a drinking fountain in the center or sometimes a marble pool with a water jet. Before your encounter with water can start you must undress in one of the cubicles and wrap your body in a cotton or silk bathing cloth known as a pestemal. Then you are ready to go into the bath, which is reached through an antechamber called the sogukluk where there is a room for shaving, lavatories and a tea stall selling beverages. 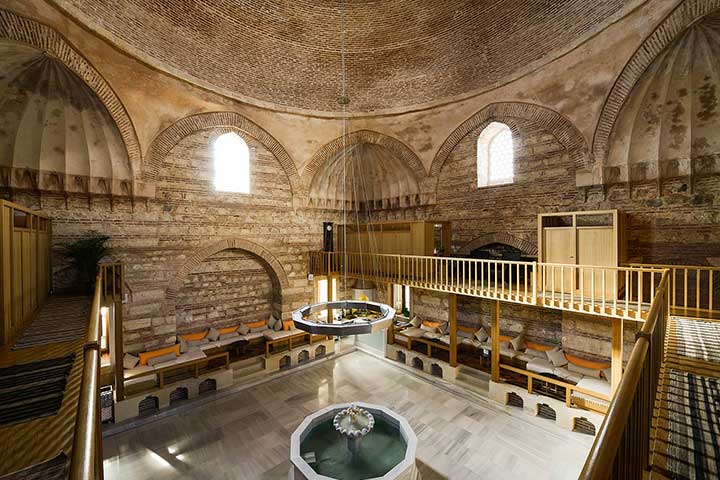 When the door to the bath proper, known as the “sicaklik” or “harrare”, opens you find yourself in a high room filled with the sound of splashing water, the scent of soap, and wafting steam through which daily concerns and worries cannot penetrate. In the gentle moist heat, your body relaxes, and your nerves are soothed. You sit down at one of the marble wash basins which line the walls, and adjusting the temperature of the water to a delicious warmth, dip the copper bathing bowl into the basin and tip the water over your head and body. Waves of relaxation seem to pour right through you as the water ripples down.

From the score or more tiny circular glass lights in the dome enchanted luminous light filters down into the bath. The long narrow rays pierce through the dim heights of the dome and play all day long on the stone platform known as the gobek tasi in the center of the room.

When you have finished washing stretch out on this platform, which is heated from beneath. Soon the heat will have opened the pores in your skin, and the bath attendant (known as a natir in a women’s bath and a tellak in the male establishment) will come along carrying a bath glove made of coarse raw silk. Entrust your body to their skilled hands as they vigorously rub away the layer of dead skin, then soap and rinse you well. If asked they will go on to give you a massage. After being kneaded from top to toe on top of the relaxing effect of all that hot water you naturally begin to feel delightfully sleepy. The Spanish writer Juan Goytisolo describes this as a state of unimaginable bliss and says that when he came out, his body which had been ‘taken to pieces and put together again, soaped from head to foot, rinsed, dried, and relieved of tension’ felt like wearing a new suit of clothes.

Baths served as health centers among the ancient Greeks and have been an important part of daily life in Istanbul since Roman and Byzantine times. Under the Romans, Byzantines baths were more than places to wash, but social clubs where people met their friends and conversed or argued over politics. Like hippodromes and theatres, they were places where people gathered to enjoy themselves. This social aspect of the bath continued into Ottoman times when large numbers of hamams were constructed all over the empire. Now people gathered together either in the Turkish bath or in coffee houses. 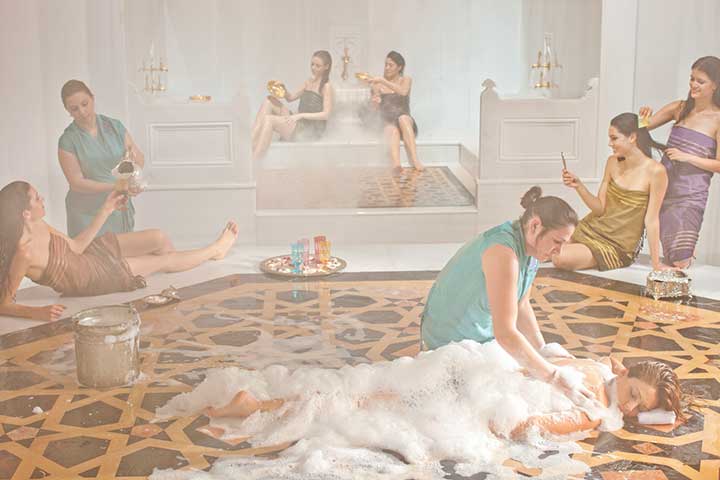 The ritual of the weekly expedition to the bathhouse involved elaborate preparations. Only the rich could afford the luxury of a private hamam supplied with hot running water attached to their homes, so the majority of families went to the public baths. For women, in particular, whose lives were confined to their homes, families, visits to neighbors and shopping, a day spent at the bath was an entertaining occasion to be looked forward to from week to week. The women and children of the family, perhaps with their friends or neighbors, set out early in the morning for the neighborhood bath carrying their bundles of clean clothes and a picnic of stuffed vegetables, pickles, savory pastries, and sherbet. After spending a leisurely morning washing, this delicious food prepared the previous day was spread out in the antechamber. The remainder of the day would be spent dressing the hair, napping, chatting, and then towards sundown, the party would make its way home. 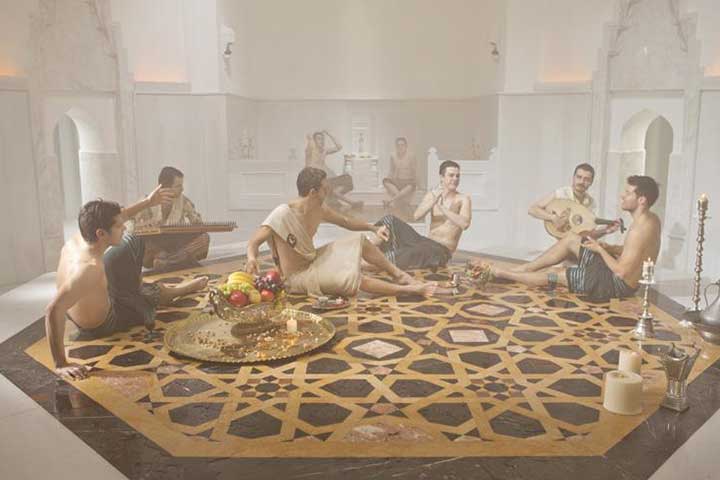 The seclusion of women which was practiced so strictly in Ottoman towns and cities was reflected in the architecture of the hamam. Naturally, it was unthinkable that men and women should bathe together, so either bath catered entirely for one of the sexes, or large double baths known as cifte hamam was built with separate sections for men and women. The men’s section of the latter had a large ornate entrance opening onto the main street, while the women’s section had a plain one opening modestly onto a side street.

The 17th-century Turkish traveler and writer Evliya Celebi recorded that there were 151 hamams in Istanbul. A bathhouse was a lucrative source of income, which may explain why so many were built. Their consumption of water and firewood for the furnace rose to such heights that in the 18th century the government took measures to restrict their numbers. 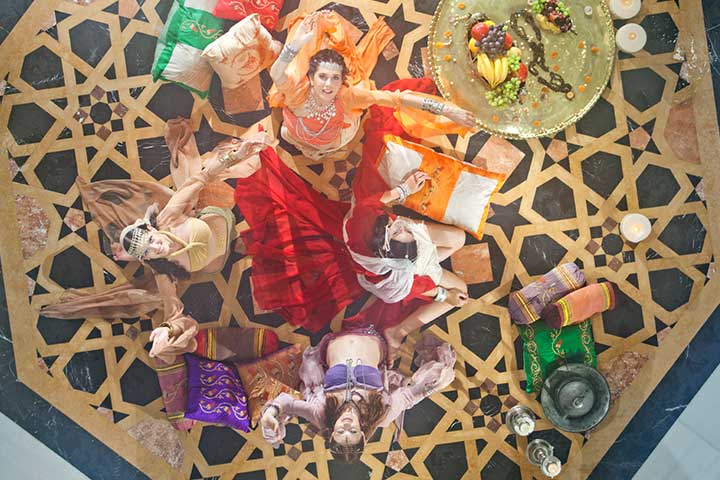 Let us take a brief look at some of the most notable of Istanbul’s Turkish baths. The oldest in the city is the Irgat Hamam built during the reign of Mehmed the Conqueror (1451-1481), while the only one to have been built on the foundations of an earlier Byzantine bath is Yildiz Dede Hamam in Bahcekapi. One of the most magnificent of all hamams is the 16th century Haseki Hurrem Sultan Hamam situated between Hagia Sophia and Sultan Ahmed Mosque. Also, the excavations nearby revealed the remains of the famous Byzantine Zeuksippos Bath.

“Zennenname”, Fazil Enderuni just past the great underground cistern was known as Yerebatan Sarayi is Cagaloglu Hamam, whose baroque architecture and bath ‘tours’ with belly dancing and dinner inclusive have made it a popular tourist attraction. This hammam was built in 1741, the last to be built before the construction of large hamams were prohibited in 1768.

Cemberlitas on Divanyolu was built by the celebrated Ottoman architect Mimar Sinan in 1584 and is famous for its interior decoration. Part of the camekan of the women’s section of this one was knocked down to make way for a road during the reign of Sultan Abdulaziz (1860-1876). A hamam of historic importance which is still in use today is Galatasaray Hamam in Beyoglu. This hamam was constructed in 1715 for men only, although later on a small women’s section was added. It is also unique as the only hamam in Istanbul to have been awarded a certificate by the Ministry of Tourism. However, it is not unique in having a website. You may be as surprised as I was to learn that most of these large hamams are on the Internet.

The dizzying speed of modern life has made the leisurely bath a luxury few can spare time for today. But there are still some Turkish people who go regularly for a real bath. Next time you are in Istanbul and want to feel that lightness of being which only a Turkish bath can impart, then take time out from sightseeing for a few hours and head for the nearest one.

According to Sufism; all is one and unique. Pluralism of space and time is just an illusion. There is neither the past nor the future. There is just “the moment” and it is the only truth.

We name it “keyif” what A. Maslow ventured and described it as the peak experience “live the moment” against the life that goes faster each time to make you unhappy. What about enjoying a peak experience of a hamam or mocha “keyif” while Turkey is under light snow?

As also Nobel awarded German writer Thoman Mann said: “Traveling is the only thing that works slowing down the time while it is flying away.”