The seven wonders of the ancient world have been revered and fascinating humankind since as far back as 200 BC. Today we can only read about and imagine what all but one of these impressive locations looked like. Built and completed around 2560 BC, only the Great Pyramid of Giza remains standing today.

Here is your complete guide to the seven ancient wonders of the world. 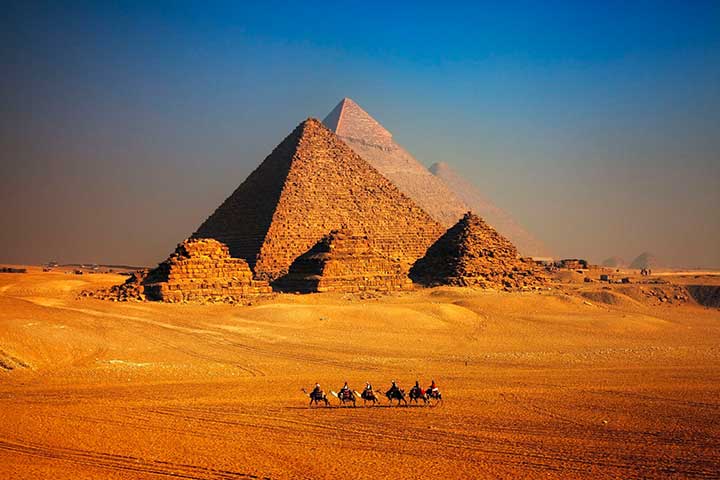 1. The Great Pyramid of Giza is the Only Remaining Wonders of the World

Constructed for the Egyptian Pharoah Khufu, the Great Pyramid was built between 2584 and 2560 BC and is the only ancient wonders of the world still in existence. This structure was the tallest man-made building in the world for some 4,000 years.

The Great Pyramid is a fantastic representation of the ancient Egyptians sophistication as well as their ability to construct magnificent buildings and monuments. Local excavations have found that it likely took roughly 100,000 skilled craftsmen to construct the pyramid, these workers came from all over the country and lived in temporary cities surrounding the worksite. 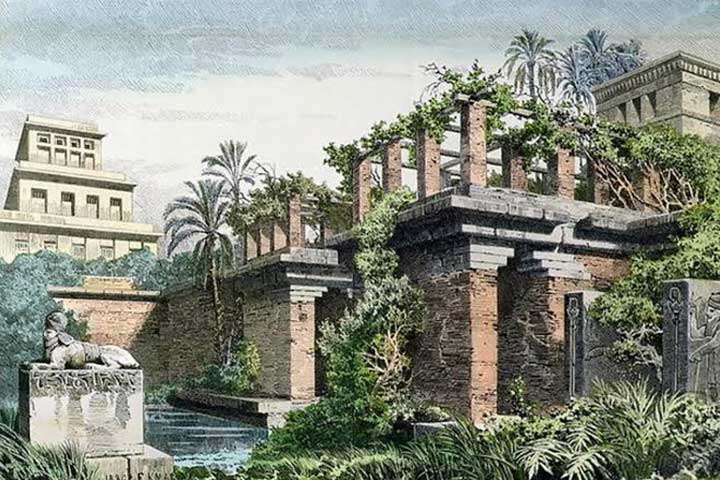 2. The Hanging Gardens of Babylon

The Hanging Gardens of Babylon are mentioned extensively in Greek and Roman literature, but there are no first-hand accounts in the historical record. There is a chance that their existence is simply folklore, but there is no way to really know. Legend has it that these hanging gardens were located in ancient Babylon, Iraq as we know it in modern-day, and were built by King Nebuchadnezzar II somewhere between 605 BC and 562 BC.

It is said that the hanging gardens were created for Queen Amyitis because she longed for the greenery of her homeland of the Median Empire, which is modern-day Iran. The king demanded a mountain be created for his wife so that she may walk amongst the flowers and fauna.

The gardens are said to have been self-watering and roughly 75 feet above the ground, with exotic plants and vines spreading across different tiers of climbing terraces. Unfortunately, it is believed that the gardens were destroyed during an earthquake sometime around the 1st century CE. 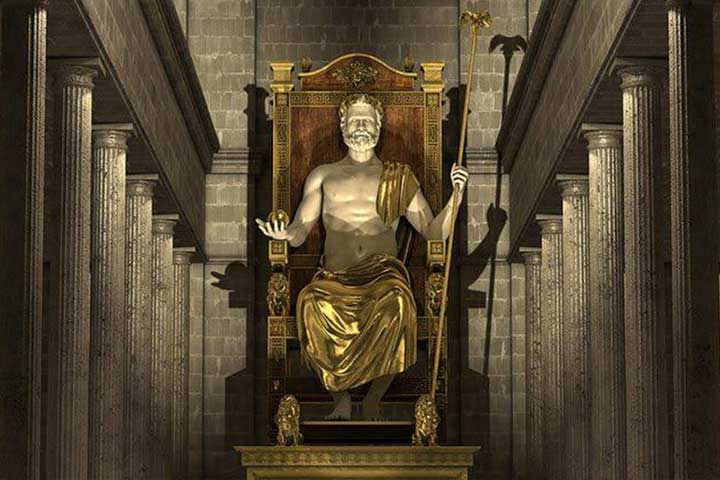 3. The Statue of Zeus at Olympia, Greece

Phidias, a master sculptor, created the great Statue of Zeus for display in the Temple of Zeus in Olympia, Greece. The sculpture was said to stand 43 feet tall and was made sometime around 435 BC. The sculpture was a sight to behold, with ivory and gold panels over a wood framework and depicted Zeus sitting on his throne. His skin was made of ivory and he was draped in robes of gold.

There were no replicas of the statue made in marble or bronze so we don’t really know what the sculpture looked like. Historians wrote that the sculpture was torn down around the 5th or 6th century AD when the pagan religion was banned from worship. Other accounts claim that it was brought to Constantinople and burned in a large fire. 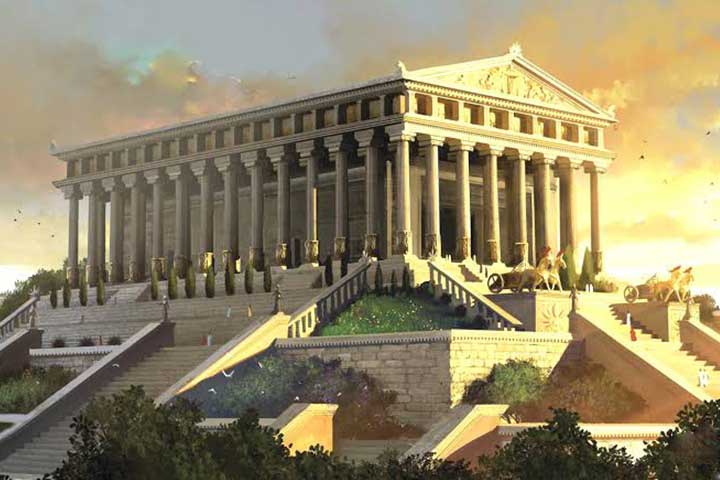 4. The Temple of Artemis at Ephesus

This ancient wonder of the world was located in western Turkey near the present-day city of Selcuk, sometime between 550 BC and 350 BC. The Temple of Artemis was built to honor the Greek goddess of hunting and depicted images of hunting, wild animals, fertility and forests.

It’s believed that the theme of the temple offended some and it was destroyed and rebuilt three times. The final time it was destroyed, Artemision was torn to pieces by a Christian mob, leaving behind only the foundation and a single column. 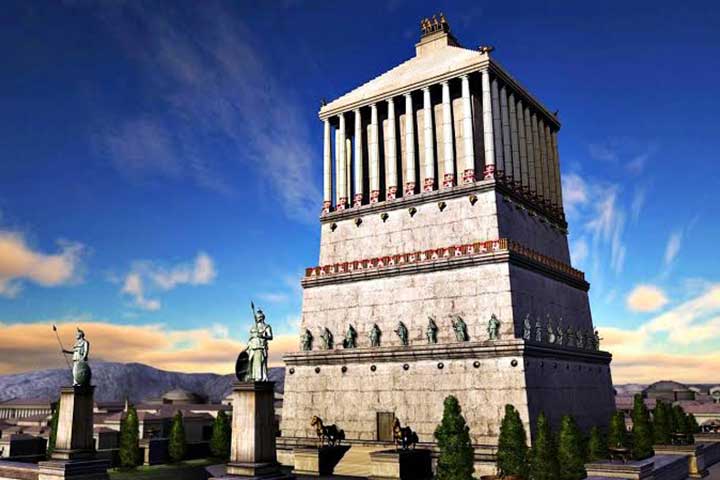 The Mausoleum at Halicarnassus was a grand tomb built for Mausolus sometime around 350 BC. Mausolus was an incredibly wealthy satrap, a governor for the Persian Empire’s provinces, and commissioned many temples, and civic buildings in his lifetime. He planned the mausoleum with Greek, Near East, and Egyptian design features and this marble-covered masterpiece name became synonymous with tombs still to this day. 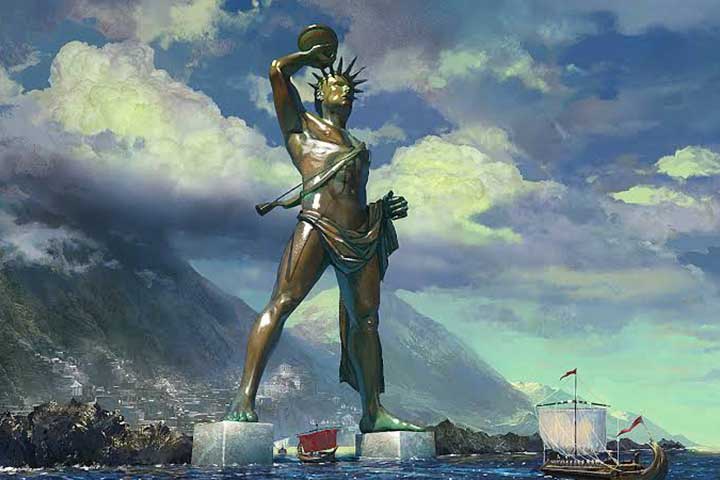 Constructed sometime between 292 BC and 280 BC, the Colossus of Rhodes was a golden statue of the Sun god Helios, the island of Rhodes’ patron god. The statue stood over 110 feet tall and looked over the harbor of Rhodes. Although rumored to stand with its legs straddling over the harbor, the Colossus stood with its legs together on its base and was the inspiration for the Statue of Liberty in New York.

The statue was erected to celebrate the defeat of the army of Demetrius in 304 BC, using the money they made by selling the weaponry that Demetrius left in Rhodes after his defeat. This wonder of the ancient world only stood for approximately 56 years before collapsing by an earthquake in 226 BC. 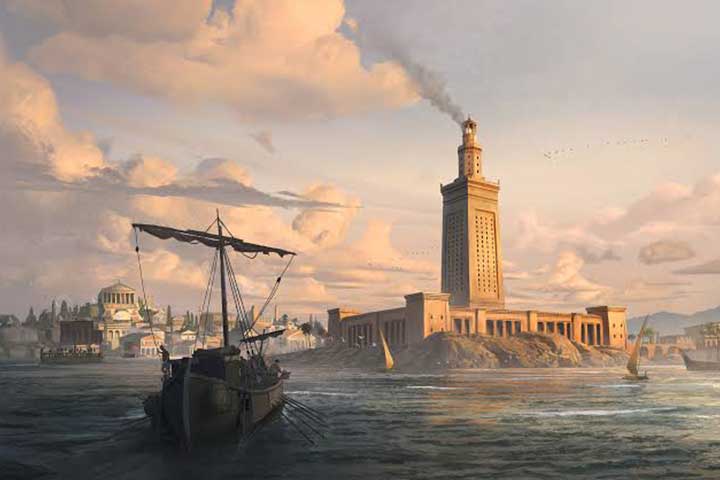 The Lighthouse of Alexandria was erected around 280 BC on the island of Pharos and was commissioned by Ptolemy I. The lighthouse was around 440 feet tall and was built on the island of Pharos. At its time, it was the third tallest human-made structure, its light was made by a mirror that reflected the sun’s rays during the day and a large fire by night. The light was said to be seen as far away as 35 miles out at sea.

Historical records depict the lighthouse as being square at the base, octagonal in the middle and round at the top. Those that saw it said that the structure was too magnificent to be described by words. Unfortunately, this wonder of the ancient world also fell victim to three separate earthquakes, and by 1480 CE, the lighthouse was fully destroyed.

Egyptians used some of the stones from the ruins of the lighthouse and built a fort on the island of Pharos, which is still standing today.

These wonders of the world are not the only great locations of the ancient civilizations but are revered as some of the most impressive. It is unfortunate that only one site is left standing for us to lay eyes on, and there is no guarantee that this site will be around forever.

If you are ready to set out on an adventure and see some of these ancient sites, please contact us today to book your next vacation.