Before the wrestling tradition itself and except for its nomadic purposes in history, camels were never unique to Turkey. Whereas, you can still see these camel owners even while visiting a historical site. There are no tours organized like in Egypt for hours, but feel free to get on one and take a short tour in the limited zone by paying 8 to 10 Euros for this short ride.

These traditional festivals were firstly made in Hidirbeyi Village, Incirliova, Aydin. However, A.Munis Armagan, in his book named Bati Anadolu Tarihinde Ilginc Olaylar (Interesting Events in Western Anatolia History), under the section titled “End of the Camels”, he states that the organizations were held during the reign of Mahmut II in Tire near Izmir in Western Turkey and neighborhood.

Although starting date of the event is not known, it is predicted that the wrestling organizations have been made since caravan and nomadic period. Based on the information obtained from camel owners and wrestling fans, nomads and caravan owners had a competition and they had this wrestling.
Camel wrestling has been seen more in Aydin as well as Izmir, Manisa, Mugla and Denizli and in many other cities, districts, towns, and villages, also in Marmara Region (Balikesir and Canakkale), Mediterranean Region (Burdur, Isparta and Antalya) and some other provinces.

Although there are traditional rules of the wrestling, they differ from region to region. However, the wrestling does not have a unique field and spectators. The organizations for the wrestling are usually held by associations dealing with activities in education, culture, health, sports and social fields for making profits. In some regions, municipalities take part in organizations in order to discipline the wrestling and provide a certain order.
The incomes from wrestling organization are used, after deduction of expenses, for specified purposes. Betting and other kinds of organizations are made for this event. The wrestling is made between male camels delivered upon mating of a female camel with single hump called “yoz” and male camels with double humps called “buhur”. The camels are for wrestling. They are born for wrestling that is their descendants were also wrestler camels.

Wrestler camels are grown up with special care and prepared for wrestling. The wrestling is organized during winter months when Tulus are angry, namely in December, January, February and March.

Wrestling camel has a name. The names are given by their owners as well as by spectators because of the actions the camels make during wrestling. It is also seen that the names are chosen from the names of heroes of TV serials. It will be better if some names are given. Some of the names are Kolombo, Dozer, Sahintepesi, Gezer, Sarizeybek, Yorukali, Almanyali, Ceylan, Flek, Ali Tulu, Talanci, Karka Kartali, Suat, Zumrut, Menderes, Firat, Takmakol, Sofor, Civan, Karamurat, Yarimdunya and so on.

The names of the camels are transcribed on the cloth put on the back of the pack-saddle. This cloth is called Pes. “Mashallah” is written under the name. 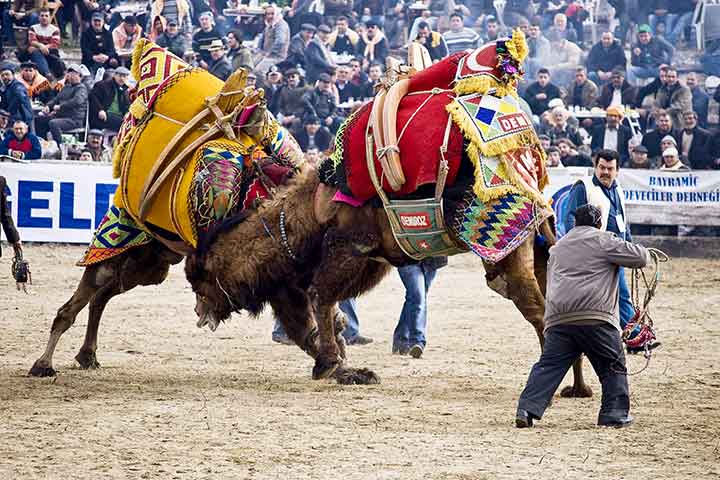 One day before the wrestling, the camels taking part in the wrestling are designed in a traditional way. In addition, they are showing up in the streets. This is a worth seeing event. You hear drum and zurna playing zeybek and the bells of the camels. The dressed up camels indicate a different beauty. One is delighted of watching them. The city is too crowded like a festival. There is a huge crowd in front of cafe houses. The fans of this wrestling are all there. Discussions about the wrestling going on. You are attracted by the camel owners in their traditional clothes and also some fans dressing in the same way, in caps, posu, jacket and traditional trousers and boots. It is also possible to see some watching video clips of former wrestling.

In the evening a friendship party called Hali Gecesi is held in order to provide friendship between camel owners and wrestling lovers. People eat, drink and sing songs of the region, play zeybek and also some auctions are held to sell carpets. This evening party is held one day before wrestling. The people prepare their meals one night prior to organization date. Everybody is very excited.

People start to come wrestling field early in the morning. While some try to find a good seat on the field, the others arrange the place where they can stay with their families. Grills and meals are prepared. At about 9.00-10.00 the wrestling field is full of wrestling lovers. In addition to the street, hawkers take their places out of the field. Several kinds of foods, drinks, gifts are already placed on the counters. And drum and zurna are played. Some people start to play zeybek accordingly. 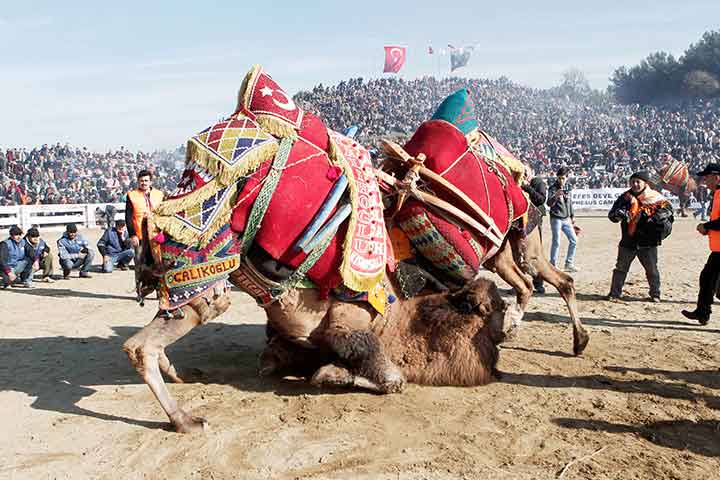 The person announcing the names of the wrestling camels (called “Cazgir”) praises the camels and contributes entertainment to the wrestling through his unique praising, and poems.

Cazgir is the most important and colorful figure of the wrestling as it is in oil wrestling. He tries to narrate the camel wrestling like sports reporters.
In the wrestling, the following are charged with duties: organization committees, referee committee (Head referee, mid referee, and desk referee), urganci (rope keeper) in sufficient number, mouth tiers (to tie mouth of the camels) and controller of tying mouth.

The festivals are made in four categories, namely Ayak, Orta, Basalti and Bas. The winners are determined by 1. making the rival escape, 2. cry 3. fall.
In the first one, the camel makes its rival escape from the field with its huge body. In the second, the camel ties its rival with several tricks and games, and the rival cannot stand this force and cries. In the third one, the winner makes its rival fall with tricks and attacks and sits on losing rival. There is also beating called “pes” (accepting defeat) in which the owner of the camel accepts the defeating in order to prevent his camel encounter damage, for this defeating the owner throws the rope into the field which means acceptance of defeating. The camels not beating each other are equal without any winners.

Some of the names given to tricks made by camels during wrestling are Bag, Cengel, Catal, Makas, Kol Atmasi, Musat Cengel, Tam Bag, Yarım Bag, Duz Cengel, Tekci, Kol Kaldirma.

In order to increase the excitement, great care is paid for matching the camels having different tricks. Each camel wrestles with a tulu in its class. The camels wrestling from the right are matched with the ones wrestling from the right and left ones with left ones, the ones hooking with the ones hooking etc. The winner camel brings its four feet together and salutes the spectator with boasting. As a reward, it gets its carpet and leaves the field. Defeated camel shows silence and embarrassment.

Each camel wrestles only once a day. The duration of the wrestling is about 10 to 15 minutes. The rules are set out in order to prevent the reduction in the number of wrestling camels and damage to them.

All of them are carried out in a disciplinary manner and traditionally. When wrestling is ended, the owners and the winner camels return home with proud and happiness while spectators are delighted of having an exciting day.

The camel wrestling usually held in winter months in Coastal Regions of Turkey where is cool enough to enjoy the festival.