Ahmet Adnan Saygun said; “There is no difference between excavating the ground to reveal an ancient monument and compiling folklore traditions or music. To arrive at broad conclusions; neither the one nor the other should be neglected.

Do the many various dances of Turkey today have a common source?

Like many of Arts of Anatolia, its folk dances have roots going back far in time. Just as the music of the Phrygian Olympus is regarded as the source of western classical music, so the sounds and movements of folk dances from many countries are the original spring of today’s modern dancing. In folklore music and dances, we find compelling reflections of the human experience over thousands of years, expressed with a passion unmatched elsewhere.

In Anatolia, which has been home to the Hittites, Phrygians, Lydians, Urartians and much more people and empires, music, folk dance and folklore costumes are the repositories of a long and rich cultural legacy. Muzaffer Sarisozen, who devoted much of his life to studying folk dances and their music, used to say that the music and dancing themselves are their historical sources. He observed that striking the knees is the movement most widespread in Turkish dances, occurring in many different types, including spoon dancing. Often the move follows agile leaps. In dances of the bar and halay types where each dancer sweep forward and then in an instant drop-down and slap their knees, the staccato sound is exhilarating to hear.
In the zeybek dances, with their swashbuckling mood of adventure appropriate to the bandits who performed them, each dancer suddenly strike their knees with a vigor which sets the heart racing. The famous bar dancings of Erzurum begin with a series of foot and arm movements executed at walking pace, then the line of dancers leap and crouch before pulling back. This is repeated at least three times in each bar. 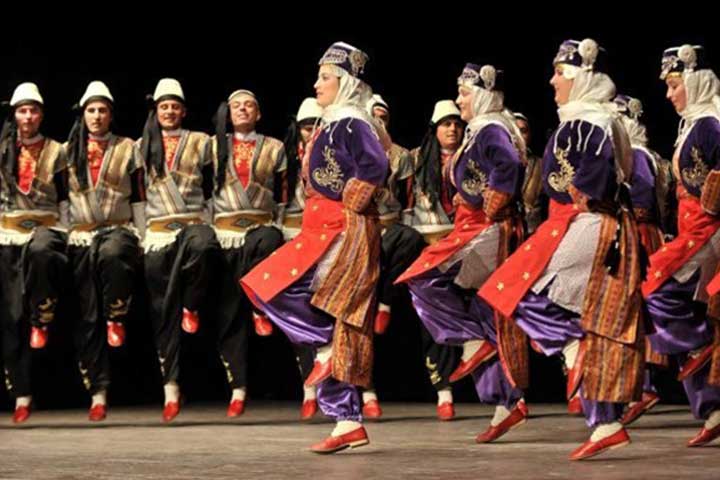 In some cases, the common threads which run through the dancing can be attributed to the Central Asian Turkish Legacy and in others to ancient Anatolian pagan rituals whose sacred character has long since been forgotten, but which continue to express a communal exuberance and joy. The origins of some dances probably lie in historical events which came to be dramatized in the abstract forms of dancing. Dances which developed at a later date often have clearer origins, representing what must clearly have been real stories of lovers or heroes who captured the popular imagination. The Abdurrahman Halay of Sivas is an example of the latter, its movements acting out a drama of heroism unrecorded in history. We can discover neither the identity of Abdurrahman nor the time when he lived, quite apart from the details of his story.

But perhaps seeking for the derivations of dance is a futile process which defeats its object. Instead, we should recognize that what matters is the meaning inherent in the dancing itself, for which the observer is free to create a hero, a story and a conclusion in his imagination. Of course, this requires a good understanding of the symbolic expressions conveyed by music and movements.

What messages do the different movements of arms, feet, and legs hold?

I am trying to answer this question. We must remember that these messages may be at the same time abstract and concrete.

What for example does the Tavas Zeybegi dance of the Aegean region relate?

According to one theory, it acts out the destruction of the Tavasogullari, a loser in the struggle waged between rival Turkish principalities in the Aegean hinterland during the Middle Ages. Whether true or not the idea of a territory’s former power and splendor being kept alive by the dance movements and costumes of the 20th-century dancer is a moving one.

The exultation arising from acts of valor is a theme which recurs in many Anatolian dances according to experts. It is unmistakable in the zeybek, dagger, sword and knife dances. In similar fashion, the way in which lines of dancers tightly packed arm-in-arm and shoulder-to-shoulder advance is interpreted as symbolizing mountain ranges or castle walls. Undoubtedly, they are simultaneously an expression of inner emotions and aesthetic values passed down over successive generations. 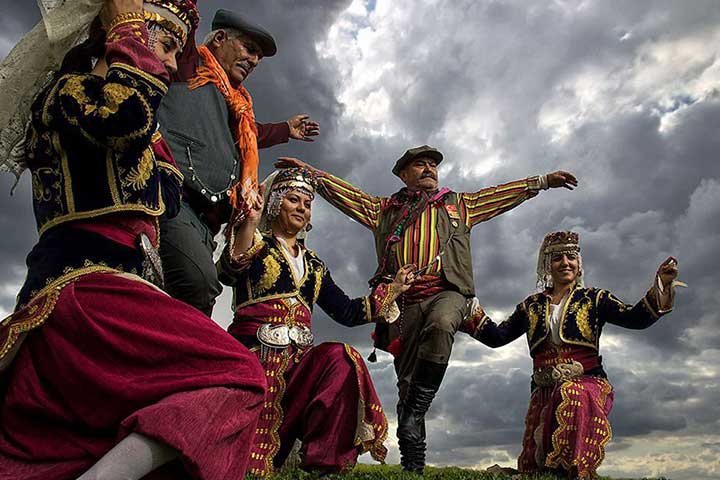 The Guvende, Sekme and Kalkan (Shield) dances of Bursa, the Halay and Turkmenkizi (Turcoman’s daughter) of Corum, the Halay of Urfa, the Sepetcioglu and Topal Kosma of Kastamonu, the Bengu of Bergama, the Duz Halay, Kizik Halay, Tanzara, Timuraga, Asirma, Tikine, Dello, Uc Ayak, and Koy Bicosu of Sivas, and the Siksara of Trabzon… The list could go on for pages. These colorful dances range from the vigorous to the gently graceful, and their moods from dramatic to romantic.

Of particular interest to those seeking out origins of folk dances is the Sinsin, which involves quiet hissing calls, whistles and shouts, and varies according to whether it is performed on moonless or moonlit nights. On moonless nights a large fire is lit in the dancing place, around which the dancers weave tight circles, then let go of their neighbors and perform a whirling chase. This version of the dance is as quiet and stealthy as it is energetic. On moonlit nights no fire is lit, and it is danced to the noise of fife and drum. The name Sinsin comes from the ancient Anatolian and Mesopotamian moon goddess Sin. Thousands of years ago in Babylon worshippers of Sin sang mournful or joyful hymns and danced. The ruins of the great Temple of Sin in Harran in Southeast Turkey can be seen today. Although the goddess herself has been forgotten and her temples have fallen to dust, her dances go on. The term tanri senligi (divine festival) still used to refer to the halay and horon dances, again suggests an ancient sacred origin. Several types of the Sinsin are still danced in the southeast and Central Turkey.

Another dancing thought to have similarly ancient origins is the Turk Halayi of Sivas. The way in which the dancers stoop and writhe with bent shoulders and rub their knees is interpreted as an imitation of people in anxiety and fear. After beating their breasts, they bend to the ground as if tilling the soil, and perform movements which are believed to symbolize harvesting and threshing corn, and preparing and eating bread. Finally, they turn to the sun god, rising with the confident strength and happiness of one who has eaten his fill. Links have been postulated between this dance and Sumerian legends found on cuneiform tablets. These allegories tell of the transition from a primitive hunter-gatherer to farmer and pastoralist, and it is as if they are acted out in the actions of the dance, which in some cases includes movements inspired by the domestication of the goat and sheep, the dancers seeming to spin thread from wool and make clothes.

The traditional costumes worn by Turkish folk dancers are another fascinating subject of study. For example, the bandits or Efe of the Aegean Region, who made their homes in the Madran and Kozak mountains, danced the Bengu and Zeybek in their magnificent outfits of long colorful sashes with pads beneath and tobacco pouch and handkerchief tucked into its folds, fringed blue silk shirts with slits in the long sleeves, short cepken jackets, a Tripoli silk scarf wound around their heads, knee-length salvar, and their armory of weapons hung about them – yatagan swords in their leather scabbards at their waists and knives and daggers in their leather holsters.