Art and arms might seem contradictory concepts, but like all human artifacts, weapons have been a vehicle for artistic expression. The swords of many types and periods which we see in museums today have often been transformed into objects of such beauty by the craftsmen who made them that we forget they were instruments of war. The Yatagan, a type of Turkish sword (which indeed became known in other countries as the ‘Turkish sword’) used from the mid-16th to late 19th centuries, was decorated with the same degree of craftsmanship as used to ensure the strength and sharpness of its blade.

The weapon is distinguishable from other types by various characteristics. The pommel of the bone, horn, ivory or silver hilt spreads out in two wings to either side, a feature which prevents the slipping out of the hand in battle. A broad thick metal band covers the join between the hilt and blade. The richest ones have hilts of silver or copper gilt set with coral, emeralds, rubies and other precious stones, and similar decoration adorns the scabbards. The blades vary from 60 to 80 cm in length and are slightly curved towards the sharp edge. While the back of the blade is made of iron, the sharp edge is made of steel for strength. The flat of the blade is frequently engraved or inlaid with motifs or inscriptions, the latter sometimes literary, such as a line of poetry or reference to an epic legend, sometimes religious in content, such as a verse from the Koran or a prayer, and sometimes words expressing the thoughts of the sword’s owner. There may also be the mark of the swordsmith, the declaration of God’s unity, and words identifying the ruler of the time and wishing him victorious. Often the blade also has a Seal of Solomon motif consisting of a star formed by two superimposed triangles. The damascene inlay work on these swords was executed by engraving the design or inscription, filling the grooves with molten gold or silver, and finally grinding the surface smooth. Another method used for silver decoration was to lay fine silver wire to form the outline of the design, and it is this technique which is found most frequently on these blades. A single sword was created by a number of craftsmen, each specializing in a particular field. While one made the iron and steel blade, another made the hilt, another the scabbard, and still another did the decoration, which as well as engraving and inlaying, included filigree and granulation. The amount of decoration and use of precious metals and stones depended, of course, on what the owner could afford. They were therefore often works of art that arouse our admiration today. 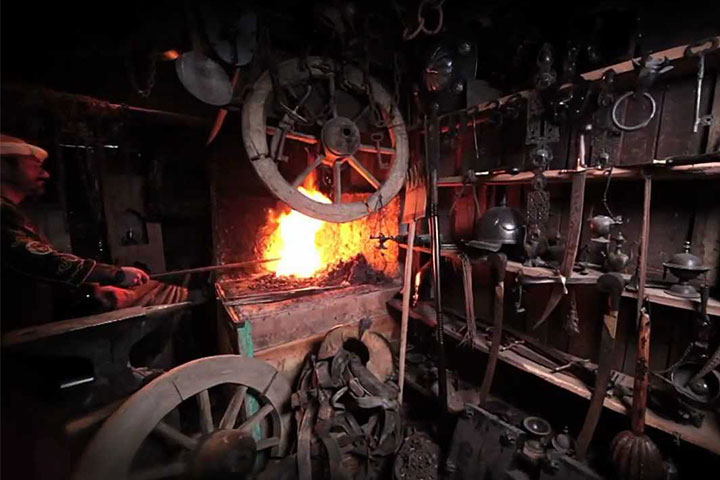 Scabbard tips were reinforced to prevent the piercing the sheath and decorated in the form of dragon, eagle or serpent heads. The Yatagans used by janissaries and other infantry soldiers were smaller and lighter than ordinary products so as not to hinder them when carried at the waist on the march.

Since the edge was extremely sharp, the way it was wielded also differed, and when a swordsman was stronger than his opponent, he would fight with the back of the blade rather than the edge. 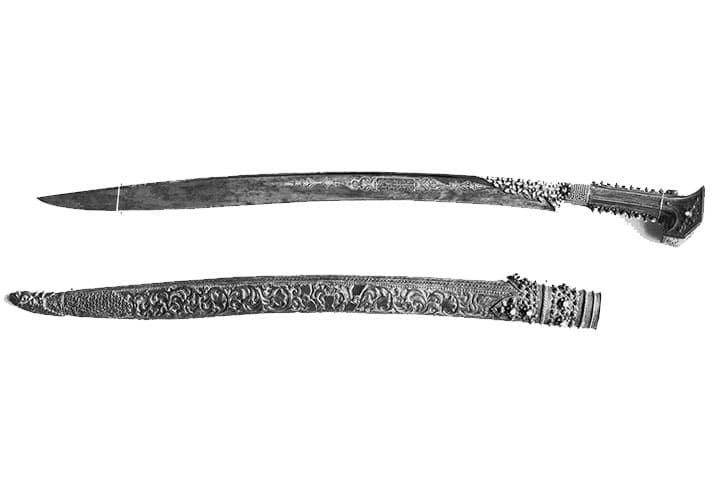 There are two theories about the origin of the term: a word deriving from the Turkish verb yatmak, meaning to lie down. The first theory is that it was placed flat in the leather bandolier used by the janissaries, and also held flat when in use. The second theory, which is considered most likely, is that it is named after the town in southwest Turkey which was conquered by a Seljuk commander and blacksmith named Osman Bey, whose cognomen was Yatagan Baba who later settled there, and gave his name not only to the town but to the famous swords which were produced there. This is frequently mentioned in history books and documents, and confirm oral accounts of the town’s history, although Yatagans were also made in all the major cities of the Ottoman Empire, particularly Istanbul, Bursa and Plovdiv. During the conquest of Istanbul, the Ottoman army was supplied with gunpowder from Yatagan, whose smiths also made other types and daggers. For centuries iron forging was the mainstay of the town’s economy, the smiths working in forges on the ground floors or next to their houses. Although today, the people of Yatagan no longer make the swords for which they were famous in the past, this is still one of Turkey’s most important centers of knife making. Here you open the door of one of the old-fashioned forges where the heat of the fire is raised by traditional bellows, to see a white-haired and bearded blacksmith beating a Redhot iron blade on the anvil and his elderly wife swinging her hammer alongside her husband. The handmade blades, which they produce, are of a quality and beauty that no modern machine can match.