In the northern foothills of Mount Uludag, 15 km from Bursa, is the picturesque village of Cumalikizik. Set amongst chestnut and fig trees, the village is famous for its Ottoman period rural architecture. The village was originally established under the endowment of the second Ottoman Sultan Orhan Gazi (1324 – 1360), and settled by Turks of the Kizik branch of the Kayi clan. Of the seven original villages five still exist today: Hamamlikizik, Fidyekizik, Derekizik, Degirmenlikkizik, and Cumalikizik. But only this one retains its original architectural texture, the others have fallen victim to modernity. Despite all the pressures in favor of the change, it remains largely untouched.

With a history going back almost seven centuries, its bay windows, large decorated double doors, flower-filled windows and plane trees welcome visitors back into the past. Only the fact that some of the colorful old houses are falling derelict reminds us that time has been at its destructive work here too.

The street doors open into courtyards known as hayat, surrounded by walls made of rough stone and cross timbers. Some of the courtyards have a floor of beaten earth and others are paved with slate slabs. Almost every one of the two and three-storey houses has a garden adjoining the courtyard. The ground floor generally consists of a larder and stable, the living rooms being on the upper storeys. The first storey is known as the kislik (winter place) since it is easier to keep warm in winter, while the second storey, being airier and cooler, is used in summer.

The houses consist of a timber frame, the spaces filled with stone and covered with a lime plaster painted yellow, mauve, white or blue. The ground storeys are windowless, while the upper storeys have jutting bays and latticed windows. Most are smothered in creepers which seem to be holding the old and weary houses on their feet. Their roofs are covered by red tiles.

The setting of the village is as beautiful as the houses themselves, and at weekends the village attracts many visitors from Bursa city center, from which the shared taxis known as dolmush, leave for the town every hour. 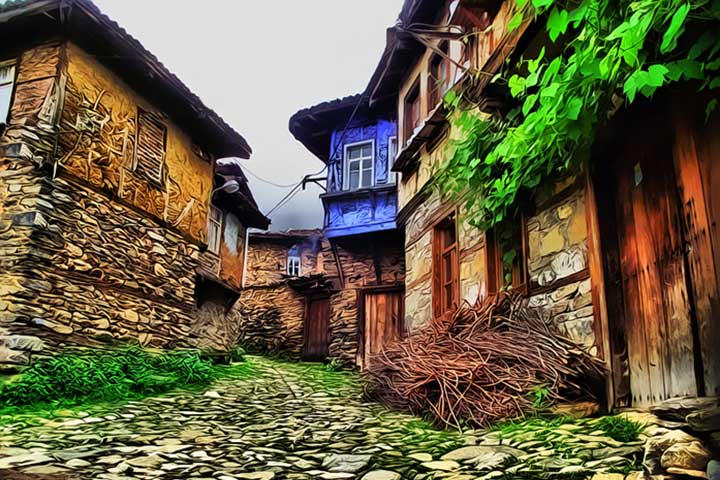 As we wandered through the narrow streets, the people we met greeted us from doorways and windows. Sometimes we struck up a conversation and were invited inside. We looked curiously around the houses we entered and felt a stab of regret at their dilapidated state. But the warmth of their occupants’ hospitality consoled us. “At one time there were 350 families living here, but now there are only around a hundred left”, Ali Amca explained. “Most of them have left their houses and moved away. The houses were old already, and once they were abandoned they quickly deteriorated.” Conservation laws mean that the owners are not allowed to make any repairs or alterations which might destroy the original character of the houses, and the local people complain that this makes even urgent repairs impossible.

The village was placed under conservation order by the Monuments Board in 1980, and in 1981 registered as an urban and natural conservation area. The village has been placed under the auspices of the nearby town of Yildirim so that it can take advantage of municipal services, and in 1997 a project was launched to finance restoration work at the town by Bursa Metropolitan Municipality and Tophane UNESCO Youth Association. The aim of the project is to implement the Conservation Master Plan drawn up in 1993 by Yildiz Technical University in Istanbul. This plan does not just encompass renovation work to the houses themselves, but a whole range of complementary economic, social and cultural measures.

Better late than never, the Cumalikizik Conservation Project has brought together a large number of individuals and institutions, including central and local governments, universities, non-governmental organizations, local residents, firms interested in sponsoring the project, and private volunteers. The project holds out hope not only for this town but for other settlements whose historical legacy is at risk from lack of funding and expertise. Explanations for the origin of the name – cuma means Friday – are various. According to one, this was once the only village in the area with a mosque, so people from surrounding villages used to come here for the Friday prayers. Another is that the founder of the village was a Kizik named Cuma Ali Bey, and the name Cumali, a corruption of Cuma Ali.

After eating delicious gozleme, layers of thin griddle bread, made by local women in the village square, we headed uphill out of the village. While once the chestnut woods which cover the area was the main source of income for the village, the cultivation of raspberries has now become of foremost importance. Last year the village launched its Raspberry Festival, which it is hoped will attract even more visitors. But with or without the raspberry festival, Cumalikizik has plenty to offer the people who come here, with its beautiful scenery, fascinating old houses, and smiling inhabitants.