As you approach Sereflikochisar southeast of Ankara, glinting light to the west tells you that the Tuz Golu (Lake Salt) is approaching. The intense whiteness and sparkle of the salt crystals look deceptively like snow and ice. Even when you reach the edge, you still brace yourself for a freezing sensation as you take off your shoes and socks. The first step is a surprise, at the second you adjust your expectations, and at the third, you become convinced that it is really salt beneath your feet. And you start to think about salt, one of life’s most essential ingredients. Salt makes up 3.5 percent of the human body, which is an extraordinary testimony to the balance of nature because the proportion of salt in the world’s seas is also 3.5 percent!

Wearing high rubber boots you can take a long walk across the lake if you do not mind sinking occasionally into patches of mud. The water varies from a few centimeters to half a meter in depth most of the time, but when the overflow from Lake Beysehir pours through channels into Tuz Golu, the depth increases by 30-40 centimeters. When the water level rises, the ecological balance of the lake is disturbed. Evaporation diminishes, and the circulation of the water between the atmosphere and ground becomes erratic.

Tuz Golu is fed by the Melendiz River, several small streams, and underground saltwater springs. Three salt pans in the lake produce one million tons of salt a year, or 64% of Turkey’s total requirements. Saturated salt water is allowed to pour into the Kaldirim, Kayacik and Yavsan salt pans, and when the salt has precipitated the water is drained off again. Then the salt is shoveled into wagons that travel along with an extensive network of rails to warehouses on the lakeshore. From here the salt is taken by truck to several privately owned salt processing plants, mainly situated in Sereflikochisar. Here the salt is washed several times, dried, and packed into sacks for distribution to factories all over Turkey.

In Ottoman times, the blocks of salt which formed naturally around the lake were broken up and sold to traders there on the lakeshore. The salt was loaded onto camels and carried off in every direction. In later years warehouses were built, and then a narrow-gauge railway was constructed to the lake, enabling salt to be gathered from different parts of it each year. This continued until the 1970s when the more efficient salt pans in use today were constructed. 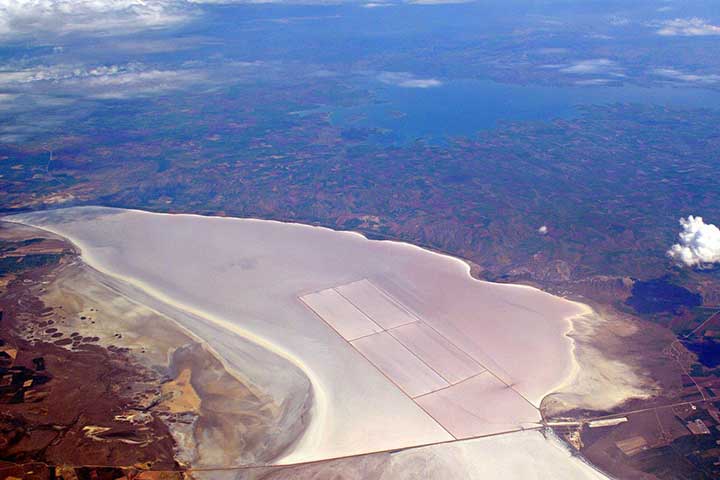 With an area of 1500 square kilometers, Salt Lake is Turkey’s second-largest lake, after Lake Van. There are several new villages around the lake settled by people from different parts of the country. Stock farming and agriculture are practiced here, and around the shores, you are particularly struck by the fields of melons and watermelons. Despite the fact that any object submerged in the lake waters for even a short time become covered with a crust of salt, the melons grown close to the lake shores are wonderfully sweet.

Numerous potteries here produce water jars which the craftsmen claim are made nowhere else in Turkey or the rest of the world. Known as salt jars, they are made of clay mixed with salt, The high level of evaporation which results causes the jars to act like refrigerators, and water kept in them remains cold in the hottest weather. Sufficient clay for 200 water jars is mixed with around 10 kilos of salt. If too much salt is added the jars crack during firing, and if the proportion is too low the jars do not allow sufficient evaporation and will not keep the water cool. While water stored in an ordinary pottery jar remains fresh and sweet for just five or six months, when stored in a salt jar it can apparently be kept without any deterioration of quality for four or five years.

A paved road, thought to date from Roman times, crosses the northern arm of the lake from east to west, linking Sereflikochisar to Kulu near Haymana. Many of the marble columns erected along each side of the submerged road to prevent the caravans from straying off and getting stuck in the mud is still standing. Today, however, soil piled on the road has raised it about one meter above the surface. On Buyukada Island in the lake is a small church dating from late Roman times, and the remains of a guardhouse that offered protection for travelers along the road and is thought to date from the same period. Red standing stones scattered through the area are said by local people to mark the graves of those killed during the First World War. There are also many ancient burial mounds in the vicinity.

Visitors touring Cappadocia often include Salt Lake in their itinerary. It is indeed worth coming to see the strange sight of the salt gleaming like silver beneath the clear lake water. When the coachloads of tourists stop on the lakeside, no one can resist paddling on the salt bottom. Disregarding the splashes of water on their skirts and trousers, they enjoy the sensation of wading through this unearthly white world. And when the water splashes dry, a fine layer of salt is left behind as a reminder of the Salt Lake.