The secular nature of the Turkish state is enshrined in its constitution and discrimination on religious grounds is not acceptable. Nevertheless, the majority of the population is Moslem and a government department exists to administer Islamic religious affairs.

The Islamic religion derives from the Prophet Mohammed who was born in Mecca in 571 AD into a polytheistic part of the world. Mohammed led the movement for acceptance of a single God and, as a result, was obliged to leave Mecca with his followers and settle in Medina in 622 AD (the first year of the Islamic lunar calendar). Within 8 years Mohammed`s influence and following had grown to such an extent that he was able to return to Mecca, take over the ancient Kaaba shrine there and dedicate it to the worship of Allah.

The main split within Islam is between the Sunni and the Shia and revolves around a succession dispute involving Mohammed`s son-in-law Ali. In Turkey, Sunnis constitute about 70% of Moslems, the Shia minority is called Alevis and have little in common with the Shias of other countries. The Alevis are generally less rigid in their religious observations.

Moslems see their religion as being the synthesis and perfection of monotheistic religions. Many important figures in religious history, including Adam, Abraham, Noah, Moses, and Jesus are accepted as Prophets of Islam, but Mohammed is the last Prophet.

The holy book of Islam is the Koran. The Koran lays down all precepts by which Moslems should conduct their lives including prohibitions on the consumption of blood, pork and alcohol and the requirement to dress modestly. It also requires that males should be circumcised.

According to the Koran, we are all born Moslem, but as we grow older we need to actively practice the five acts of faith required of every Sunni Moslem:

To say and believe “I witness that there is no God but Allah and Mohammed is his prophet”
To practice Namaz (prayer) five times a day at prescribed times – early morning, noon, afternoon, early evening and night. These prayers are said facing Kaaba
To fast from sunrise to sunset and to behave well during the holy month of Ramadan (Ramazan in Turkish)
To make a pilgrimage (Haj) to Mecca
To give alms to the poor at the rate of 2.5% of annual income
Today, approximately %24 of the world population is Moslem.

The Turkish word for mosque is cami. The words mosque and cami both derive from Arabic. ln Arabic a mescit is a place where people gather but in Turkish, the word mescit is used for the small mosques, or prayer rooms, provided at airports, bus stations, hospitals, and other public places.

There is no direction in Islam about the type of building a mosque should be but before a place can be called a mosque certain essential provisions must be made: There must be a place for ritual ablutions to be carried out; there must be a prayer niche (mihrab) which indicates the direction of Mecca (kible) from which the imam leads the prayers and there must be a minaret (minare) from which the people are called to prayer. This calling used to be carried out by the mullah (ezan) but is now more likely to be a recording played through loudspeakers.

Islamic law forbids statues or pictures of people or animals so these can never be displayed in mosques but there is no prohibition on floral or geometric designs so these are often used in carpets, wall hangings and pictures to provide decoration. Quotations from the Koran, sometimes executed in precious materials and always with beautiful Arabic calligraphy are also frequently seen.

The life of many mosques extends way beyond their religious function. It is often in the mosque that the community meets to conduct political, social and administrative activities.

The Anatolian type mosque dates from the 13th or 14th centuries and has a single dome covering the main prayer hall. Arabic style mosques are built around a courtyard and often have religious schools, shops, and other facilities under the same roof.

The Anatolian type spread with the Ottoman Empire and beyond its borders. Masterpieces of the style were created by the great architect Mimar Sinan of which possibly the finest examples are the Selimiye Cami in Edirne and the Suleymaniye Cami that dominates the skyline of Istanbul.

The Pilgrimage to Mecca

The pilgrimage to Mecca is an act of worship that all Muslims in good health and with the financial means should fulfill. The concept of pilgrimage as a religious duty goes back around four thousand years, to the time of Abraham and his son Ishmael. Mecca and the Kaaba are the most sacred places of Islam, associated with Abraham and the monotheistic faith which the people of Arabia abandoned for idolatry. Thenceforth the Kaaba was filled with idols and pilgrimage acquired many of the customs of idolatry. But with the conquest of Mecca by Muhammed and his followers in 630 AD, the monotheistic faith was revived and idolatry outlawed. The following year it was declared that pagans could no longer perform the pilgrimage to Mecca, and it became a purely Muslim practice. This has continued over the past fifteen centuries and is performed by Muslims from all over the world.

The scale of this extraordinary event has inspired poems and hymns, and Muslim writers have left accounts of their journey to Mecca and experiences there. The human life is short compared to that of communities and nations, and the Hac impresses on pilgrims the events in the life of Muhammed, in whose footsteps they are following, and by leaving behind the cares and pleasures of daily life at home enhances their awareness of God and their faith. The Hac and other pilgrimages, therefore, encourage believers to seek the true and right, and at the same time lends a sense of unity, fraternity and solidarity between people joined in a common purpose. Whether from Islamic countries or elsewhere, Muslim pilgrims throw off their pessimism and lethargy towards their religious duties in the course of their journey.

Lapses in morality whether in word or deed, during the pilgrimage cancel out any blessing the pilgrim might have gained by performing it. The Prophet said: Whoever makes the pilgrimage for Allah, and who in its course refrain from evil and from disobedience to God will return purified of their sins as the day they were born of their mother’s womb (et-Tac, 2/106).

Pilgrimage in the Koran:

They will come unto thee on foot and every lean camel; they will come from every deep ravine. That, they may witness things that are of benefit to them and mention the name of Allah on appointed days over the beast of cattle that He hath bestowed upon them. Then eat thereof and feed therewith the poor unfortunate. Then let them make an end of their unkemptness and pay their vows and go around the ancient House.

Lo! the first Sanctuary appointed for mankind was that at Mecca, a blessed place. Guidance to the peoples; wherein are plain memorials; the place where Abraham stood up to pray; and whosoever entereth it is safe. And pilgrimage to the House is a duty unto Allah for mankind, for him who can find a way thither. 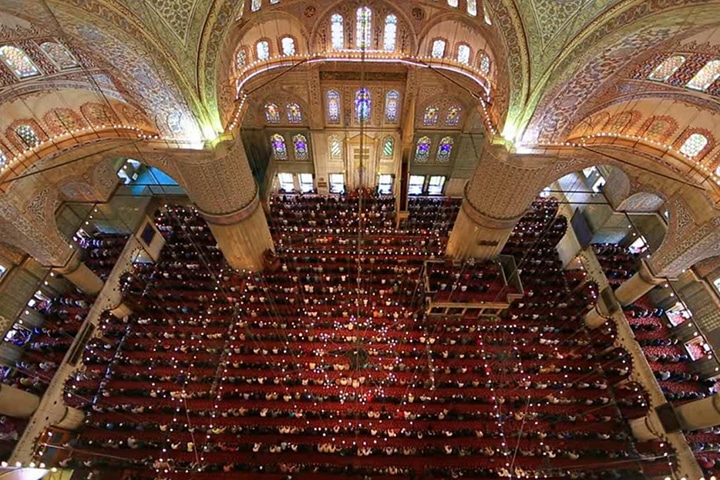 Today Friday prayers and those of the Ramazan and sacrificial feasts are performed in village mosques, but until the end of the 13th century, these only took place in the so-called Friday mosques in the cities. People from the surrounding villages and towns would come to the city, and the assembled crowds would perform the feast prayers altogether in open-air mosques known as musalla. The Friday prayers, which only city dwellers performed, only took place in a single mosque in each city. For this reason, large mosques capable of holding all the Muslim inhabitants were built. These were variously known as mescid-i cuma, mescidi-azam, cami-i kebîr, mescidi cami, mescidi-ekber, mescidi-hutbe, and mescid-i minber cami. The Turks referred to these mosques, which were built in the principal cities of Anatolia throughout the 12th to 14th centuries, as cuma mescidi, cami-i kebir or more often as ulucami meaning ‘great mosque’.

The custom of Muslims living in the same city gathering for the special prayers survived until the end of the 13th century. As well as bringing people together and strengthening social ties, there were, of course, religious and political reasons behind this custom.

Sultans and princes who felt the need to confirm the legitimacy of their reigns by obtaining the authorization of the Abbasid caliphs in Baghdad used this as justification for having sermons known as hutbe preached in their names. To symbolize this privilege they built magnificent Friday mosques in their capitals, with beautifully carved and decorated pulpits known as minber reserved for the hutbe sermons.

In time, however, as the Muslim population grew, the tradition of everyone gathering in a single mosque became impossible to maintain, and during the time of the Mamluks pulpits were installed in some old mosques in Cairo and other large cities or new Friday mosques were constructed.

In terms of their historic function, architecture, and spatial characteristics, Friday mosques were distinctive throughout the Islamic world, from the steppes of Asia to Spain and North Africa. Various other places of public worship existed, such as the cami, mescit, kubbe, namazgah and musalla, each varying in form, but it was the Friday mosque which became the most characteristic Islamic place of worship in Arabia, Egypt, Spain, Iran, India, Turkestan, and Anatolia.

Their shared characteristics were a monumental portal, a mihrab or alter niche, minber, and tall minaret from which the call to prayer could be heard over a wide area. Every Friday, and on feast days, great crowds would flock to these mosques, and the sultan or city governor would ceremoniously enter with their retinues.

Friday mosques were regarded as holy ‘houses of God’, and members of the congregation stepped onto the threshold with their right feet, pronouncing a formula calling God’s benediction on the Prophet. Only those regarded as pure in religious terms could enter, so it was essential to perform complete ablutions before going to the Friday prayers, to wear one’s best clothes, and to use perfume.

Once inside talking was frowned upon. Women could attend the Friday prayers so long as they did not use perfume and prayed in special galleries reserved for them. Religious education for both scholars and ordinary people also took place in these mosques. The Friday mosques of Anatolia, called ulucami by the Turks, were mainly constructed between the 12th and 14th centuries during the eras of the Seljuks and Turkish principalities, and the early years of the Ottoman Empire. The earliest of all is found in the southeastern region and the last in Bursa and Edirne. Harran Ulucami is of exceptionally early date, having been built by the last Umayyad caliph Mervan II (744-750), and this is followed by Diyarbakir Ulucami, which was converted from a church in 1092 by city governor Amiduddevle on the orders of the Seljuk sultan Meliksah. The newest in date is Bursa Ulucami built-in 1397 by the Ottoman Sultan Bayezid I. However, both in terms of their architecture and function the Eski and Uc Serefeli mosques in Edirne dating from 1414 and 1447 respectively could be classified as ulucamis. Divrigi Ulucami (1228) constructed by the Mengucek ruler Ahmed Sah is described in the inscriptions over its doors as a ‘mescid-i-cami’ul-mubarek’.

Hagia Sophia, a Byzantine church that was converted into a mosque following the Turkish conquest of Istanbul in 1453, then finally to a museum, could be regarded as that city’s first ulucami. Large mosques built by Sultan Mehmed II and his successors were known as selatin or royal mosques.