The only man-made structure on earth visible from space is the Great Wall of China. Yet neither this nor any other defensive walls or castle have kept out enemies for so long as the walls of Istanbul. For no less than 1000 years, these walls succeeded in protecting the capital of the Eastern Roman Empire against attacks by barbarian tribes in late antiquity, and later against more disciplined armies with sophisticated equipment. Istanbul first succumbed to the Fourth Crusaders at the beginning of the 13th century, two and a half centuries before the young Mehmed the Conqueror, Ottoman sultan and general of genius, took Constantinople at the age of 21. However, the crusaders owed their conquest of the splendid capital of Eastern Rome not to breaching its invincible walls, but to enter the city under false pretenses as supposed allies. The walls of Istanbul date from the founding of the Eastern Roman Empire. The term Byzantine, by which this empire is today commonly known, is in fact incorrect.

It was coined by the 16th-century German humanist Hieronymus Wolff, who misleadingly applied the name from what were probably political motives, his aim being to represent the Germanic Holy Roman Empire as the true successor to the western Roman Empire.
The walls which defended this world capital for 1200 years amazed visitors to the city with their magnificence and beauty. The land walls and their gates on the western side of the city are both of more aesthetic value and greater historic importance than the sea walls along the shores of the Marmara Sea and the Golden Horn. This is because the main thrust of siege and invasion was always from the west. It was from this direction that the Latin invaders attacked; that the Paleologan dynasty of the Nicaean Empire returned to Istanbul following 57 years of Latin domination; and that the Turkish armies attacked in 1453. According to the rich heritage of Greek Orthodox hagiography, each gate was the scene of a miracle associated with a saint. 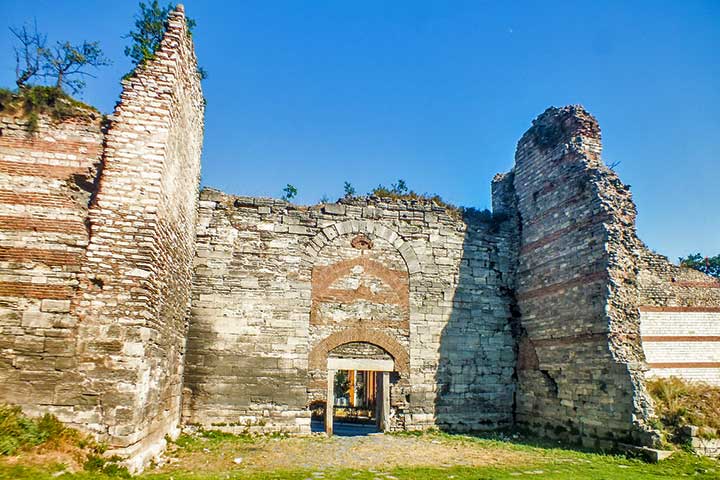 When Constantine the Great rebuilt the city between 324 and 330, the land walls which he constructed lay further eastwards than those we see today. It was Anthemius, the capable governor of the Emperor Theodosius (408-450), who enlarged the walled area of the city two-fold, building the walls still named after him today. In this way, several monasteries, such as the Studion Monastery, and extensive gardens and orchards were enclosed in the city boundary. The area around the Ottoman barracks of Davudpasha was similarly a military zone in the time of Theodosius. We will take a brief tour of the land walls, starting from Yedikule at the southern end. There is not time here to stop at each of the gates, as there are ten of them. Emperors like Leo I (457-474), Basilicus (475-476), Phocas (602-610), Leo the Armenian (813-820) and Nicephorus Phocas (963-968) embarked on the path that took them to throne and fame through Yedikule Gate. This was the ceremonial entrance to the city known as the Golden Gate (Porta Aurea). 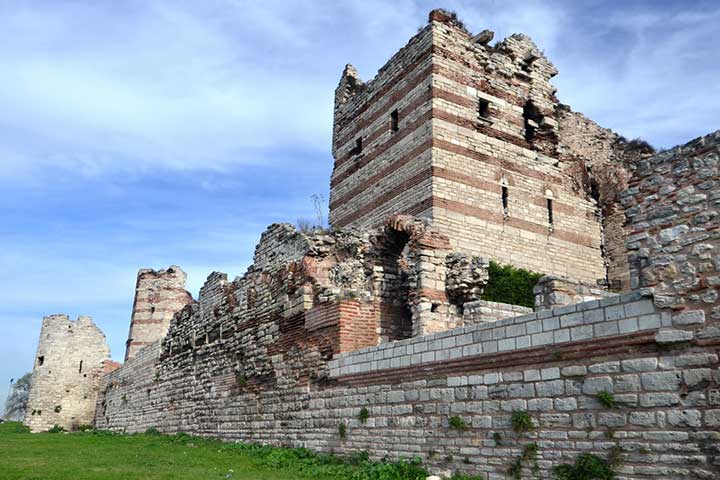 The renowned historian Koniates describes the triumphal entry through this gate of several emperors, and Heraclius following his victory over the Sassanids in 629, following which the gate was also known after him. The same chronicler describes the entry through this gate of the Latin crusaders, who were to occupy and plunder the city, in 1204. Koniates and his family left the city through the same gate, and their departure seems to have marked the end of the golden age of Eastern Rome. The gate which the Turks call Silivri Gate, but which was formerly called the Gate of the Sacred Spring because it led to the Sacred Spring of the Fishes, is where Alexius Strategopoulos entered the city when he recaptured it from the Latins in 1261. The land walls are in the form of a double set of walls with a deep moat in between. Today the moat is filled with earth and rubble, and the most delicious vegetables are grown here. If you are lucky enough to come across any for sale, do not forget to taste them.

Now let us continue to Mevlevihane Gate, today better known as Mevlakanakapi, after the famous Mevlevi Dervish Lodge of Merkezefendi which used to stand outside the walls. There is a large Muslim graveyard in this area today. The Sacred Spring of the Fishes and Merkezefendi reflect the spiritual atmosphere of Christian and Muslim Istanbul. The most important gate of all is Topkapi (far from, and unrelated to the palace of that name), literally the Cannon Gate. It was at the walls around this gate that the 53-day Turkish siege, which ended on 29 May 1453, was concentrated; and which received the heaviest bombardment. If you enter through this gate, you can visit Kara Ahmet Pasha Mosque, the work of the celebrated 16th-century Ottoman architect Mimar Sinan. The next minor gate is Sulukule Gate, which leads into a colorful district inhabited by gypsies, many of whom make a living as musicians. Next comes the gate which was the most important in Ottoman times, Edirne Gate, which opened onto the main road through the city. 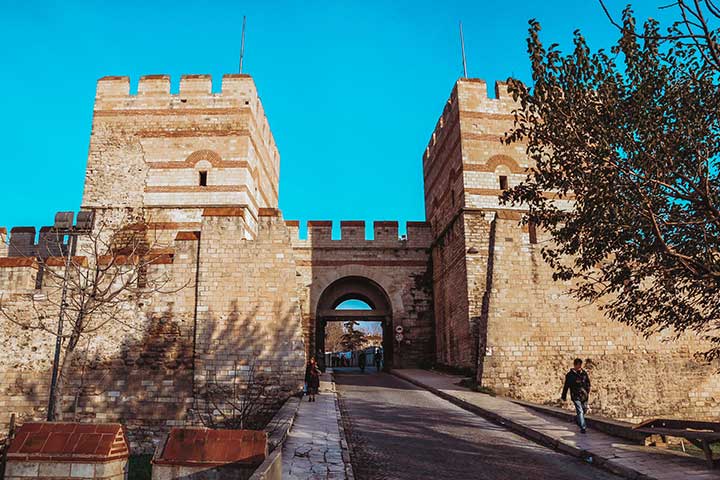 It is said that the young Mehmed II entered the conquered city through this gate on 29 May 1453 and it was through this imposing gate that the Ottoman armies passed on their way back from victorious campaigns in Europe. The populace would applaud returning rulers whom they held in affectionate regard, and even those, like Mehmed III, who was unpopular, would be sent to war from here with compassion and respect. Caravans arriving from afar would here catch sight of the rich buildings of the city and the elegant mosque built by Mimar Sinan for Mihrimah Sultan, daughter of Suleyman the Magnificent.

Now let us descend the hill from Edirnekapi to the shore of the Golden Horn, keeping to the road running outside the walls, because from here we will pass by Blachernae Palace and the Dungeons of Anemas, with glimpses of immortal cypresses and mosque. One of the fiercest battles of the Turkish siege took place here in 1453. The walls were defended by the Genoese general Giustiniani and his forces.

Blachernae Palace, known in Turkish as Tekfur Saray, served in the 16th century as an imperial menagerie, housing exotic animals such as giraffes and rhinoceroses. Our tour of the land walls ends at Egrikapi, the Crooked Gate, where the revered Islamic scholar Toklu Dede is buried. Along the walls are the traces of the history and faiths of two empires. In many places are symbols of Christ Triumphant, the tombs of Muslims who fell during the Omayyad period siege and the later Ottoman siege of 1453, and churches and mosques. The mystic & sacred character of this 2000-year-old capital city is impressed upon us all the way.

If interested, we can customize you a tour of the city walls if desired.
Please check our private guided tours of Istanbul and inquire for more details.