Today the Yoruk nomads are confined mainly to the Taurus Mountains, with their mist-shrouded peaks and vast high pastures. A people passionately devoted to their freedom, the Yoruk are like birds of passage. Until the early 19th century thousands of Yoruk nomads lived in the Ottoman territories of the Balkans and throughout western, southern and southeastern Anatolia. They spent the summer on the high pastures, autumn at lower altitudes, and the winter months in sheltered encampments with their flocks and herds. These wandering pastoral communities began to settle on the land in Ottoman times, and this process gained momentum under the Turkish Republic. Both men and women were excellent horsemen and brave fighters, which meant that in Ottoman times, the Yoruks were sent to the frontiers of the empire, particularly the Balkans.

Under the Ottomans, however, the Yoruks resisted permanent settlement, which they only accepted with the reduction of their pastures during the 20th century. Today, most Yoruk communities live permanently in their winter villages, so the sight of Yoruk tents on the high pastures in summer is becoming increasingly rare. Yet there will always be a few Yöruks who continue to make the annual migration into the Toros Mountains, drawn by the lush grazing, fresh mountain air, ice-cold spring water, and above all by the freedom of mountain life. During the summer months in the mountains, milk from the sheep and goats is used to make butter and cheese, which are taken to sell in the market along with wool and surplus livestock. The womenfolk also busy themselves with weaving and embroidery over the summer.

When the weather begins to cool, the Yoruks descend further down the mountains to the autumn camps, where they make butter and cheese for their use during the winter months. After spending the summer and autumn under the shade of the junipers, the shepherds protected from the cool of the night by their felt cloaks, it is time to set out for their winter villages. In early November frost ices, the grass of the high meadows and snow begins to blanket the peaks. The winter villages are usually situated on the coastal plains, where the weather is mild and there is plenty of rich winter grazing and firewood. Not until May will they head for the mountains again.

Their felt tents known as karacadir or alacik and made of goat’s hair were in the past the only homes of these pastoral people. The interiors are decorated with brightly colored carpets, kilims and felt rugs woven by the women in traditional patterns. Amongst the Yoruks it is the women who milk the sheep, weave kilims and carpets and bake the bread. It is they who clean, comb and spin the sheared wool, dye the yarn and transform it into textiles adorned with a thousand and one colorful motifs. The men, meanwhile, are responsible for guarding homes and livestock and going to market.

Yoruk cuisine is based primarily on meat and dairy products. The markets set up near the high pastures play an important social as well as economic role. Here friends and relatives from other Yoruk communities find the chance to meet in the course of selling their products and making their purchases. Since Yoruks are always on the move in such fresh pastures, they have no permanent address, so usually give that of a merchant they know in the town for receiving letters from sons doing their military service and from friends.

At the end of April when the temperature on the plains begins to rise, busy preparations begin in the Yoruk encampments for the migration into the mountains. As the grass dries brown in the heat and the flies multiply, the sheep, goats, camels, and cows become restless on the plains. 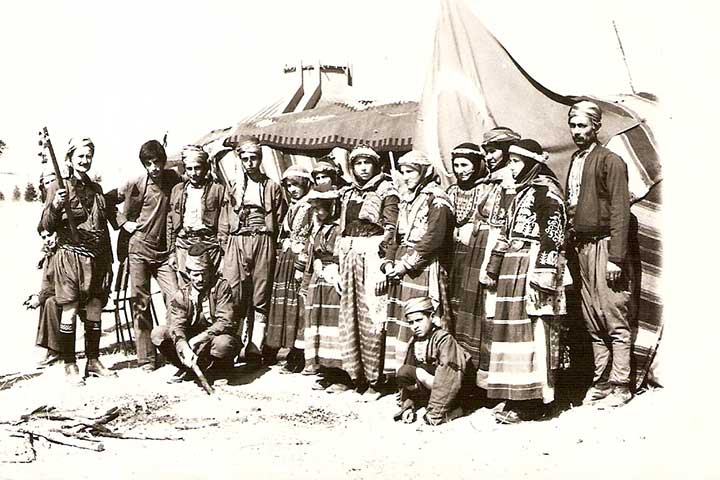 If the Yoruks do not migrate when the animals expect, the older animals take their place at the head of the herds and attempt to lead them up into the mountains in search of green grass and cool temperatures.

With the date of departure set, the level of activity mounts to a climax. The saddles of camels, donkeys and horses and the bells of the sheep and goats are brought out for cleaning and repairs. Clothes are washed, and leavened bread is baked in readiness for the journey. On the morning of departure, the children and young people put on new bright colored clothes. The young men are at their smartest, with their mustaches twirled, shawls wound around their waists, and their rifles and pipes slung on their backs.

The patterned sacks, tents, and other equipment are loaded onto the camels and covered over by large colorful kilims so that the animals look as decorative as a bride. In the early morning, the cavalcade sets out, at last, the sound of pipes mingling with the tinkling of bells. The trains of animals progressing in a single file is an unforgettable sight. The journey to the nearest high pastures takes about seven days, and to those further away can take as long as fifteen days to a month. The migration of the Yoruk nomads is an ancient heritage of their culture, with its unique traditions.

Communities of Honamli, Karakoyunlu, Gebizli and Hayta Yoruks still spend the summer on the high pasture of Anamas Yayla between Isparta and Konya, and the Yeniosmanli Yoruks at Sobuce Yayla between Antalya and Burdur. Apart from a small number of Yoruks belonging to the Sarikeceli and Bahsis tribes, most of the Yoruks now live a settled life. But those who do persist in their nomadic tradition do not show any inclination to give it up, so hopefully, we will be able to enjoy the sight of the Yoruk nomads wending their way up to the pastures at 1500 to 3000 meters and galloping their horses at liberty in the mountains for many years to come.