Musicians announce their approach. The roar of the crowd and the noise of music can be heard outside the arena and even in distant neighborhoods of the city. Dressed in magnificent rented costumes the gladiators descend from their litters for the first and perhaps the last time. Seated in the state in the tribunes, magnates, dignitaries, nobles and possibly the emperor himself calculate their possible gains from gambling on the winners and investments as owners. The organizer of the event checks that the weapons are well sharpened and capable of dealing with mortal blows. Trainers, arena sweepers, bookies, armed guards, clowns, and a host of others take their places as the musicians build up to a fanfare that will whip up the spectators’ excitement. The gladiators who made their unspoken farewells to one another at the feast the previous night now fix their eyes on the gates. They try to read their fate from the expressionless faces of slaves who have taken on the appearance of Mercury, or Charon who ferries spirits to the underworld.

Their bodies will either be dragged lifelessly through the Porta Libitinensis (Gate of Death) which symbolizes the goddess of mortality or walk free through the Porta Triumphalis. They have only two choices; to fight well or die well. The rest will be completed by a story, an inscription or a mosaic. Thraex, samnit, hoplamachus, retiarius, venator… These were some of the types of gladiator, classified according to their weapons and adversaries. Hundreds and thousands of gladiators of diverse ethnic origin at one time served the foremost entertainment sector of Roman civilization with many different weapons and fighting styles. In fact, we are still familiar with most of them from computer games, cinema films and modern schools of martial arts. With their great swords, shining armor, and decorative helmets, they continue to capture the imagination as symbols of strength and courage for people of the 21st century. Their weapons include nets, lassos, bows and arrows, short or long swords, daggers with curved blades, shields, triple-bladed spears, chains, and many more.

Each weapon requires different skills and movements. If you want to be a retiarius you must fight with net and spear, and your favorite opponent, or quarry, will be a murmillo, who represents the worm eel. But the most popular type of gladiator is the thraex, a Spartacus who symbolizes the struggle against slavery. They possess all the secret skills of fighting with a curving tipped dagger capable of penetrating armor and a small shield. Of course, there are plenty of other choices, such as a venator who fights against wild animals, or an andabata who wears a helmet that covers his eyes, so long as you do not mind the fight coming to a quick conclusion. But the words engraved on tombstones are almost invariably the same: ‘Philokynegos Makedon is my name. The invincible gladiator of the bronze wreath. I have nothing but loneliness now. I share the common destiny.’ An exhibition currently running at Selcuk Museum takes an in-depth look at the real world of the ancient gladiators. Entitled The Gladiators of Ephesus, the exhibition tells their stories through epitaphs, monument inscriptions, weapons, costumes, and reconstructions. The eight wreaths carved in relief on marble for Kalitos of Milas mean that he won eight fights, and the palm in a picture of another gladiator symbolizes the prize he received. Two naked figures back-to-back with ropes around their necks clearly had no chance of coming out of the arena alive, since the puny weapons in their hands would not have enabled them to withstand the attacks of wild animals for long. Gladiator fights originated in the ritual of sacrifice which accompanied people on their journey into the next world. They were first held in Rome in the year 264 BC when such fights were organized by the sons of Junius Brutus in memory of their dead father. The display proved so popular that it soon became traditional for men of rank and wealth to hold gladiator fights on the death of their relatives. As the number of gladiators required rose, a whole sector grew up, with its organizers and financiers, gladiator schools and trainers. The displays became so extravagant and the sums spent was so huge that the authorities began to take restrictive measures to protect the nobility from financial ruin. 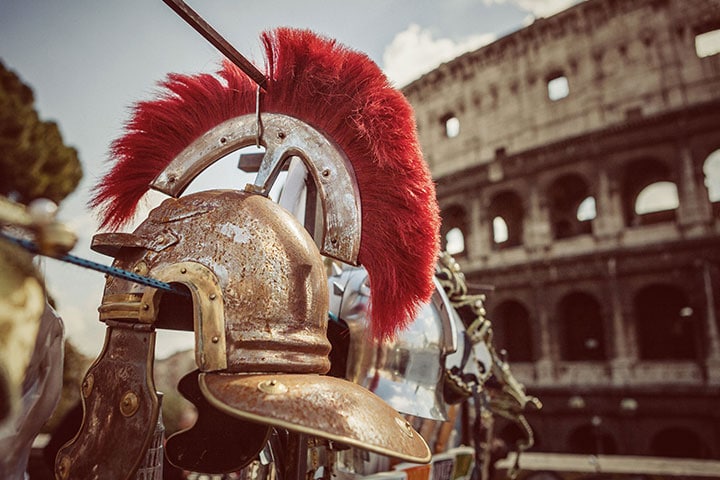 Julius Caesar (100 – 44 BC) organized fights between 320 pairs of gladiators in memory of his father, who had died years before, and this occasion laid the foundations of the ‘arena’ which was to symbolize Rome in microcosm. According to ancient writers, Caesar’s gladiators were fitted out with silver armor, and he won votes on the strength of these entertainments. The arena had become a showplace where prestige, power and wealth competed. Executions, sacrificial blood and the clash of swords opened the doors to political victories, and fights to the death gave fresh impetus to the fighting spirit and discipline of the army. Fights began to be held on the eve of military campaigns and at military camps. As the empire’s territories expanded so these cruel displays increased. The arena became the symbol of imperial power, prisoners of war from different cultures and exotic animals brought from far-off Roman provinces demonstrating how far the lands of the empire reached. Gladiator fights were not abandoned completely until the 7th century AD.

According to Theodoret, the end came when a monk died in the arena attempting to prevent the fights. By then tens of thousands of people and animals had lost their lives in the dust of the arena. The greatest arena of all was the Colosseum in Rome. This was opened in the year 80 AD, and during the inauguration ceremony lasting 100 days, almost nine thousand exotic animals were killed. On one occasion Emperor Augustus (27 BC – 14 AD) had 5000 pairs of gladiators and 350 animals fight to the death, and Trajan (98 – 117 AD) watched the same number of people slaughter one another at the victory celebrations for the conquest of Dacia (Romania). Hundreds of people died in reality in the course of enacting characters of drama and myth, and the rhinoceroses of Nubia, the elephants of North Africa and the lions of Syria became extinct as a consequence of the insatiable appetite of the Roman arenas.