Every domestic animal has a different characteristic. One of the cats attracting human beings’ attention for centuries, having silky white fur, different colors, perfect hunting abilities and loving to play with water is Van Cat.

The fossil of ancestor primitive of modern domestic cats can be seen about 12 million years ago. It is known that the domestication of cats was made by Egyptians in 3000 BC. The domesticated cats were treated as holy creatures and respected as a goddess. Although there are various arguments about the place and time of domestication, the thing that is certainly known is that Asians took part in domestication. On the other hand, some resources suggest that the cats were semi-domesticated in 1900 BC.

Cats are carnivorous. When generalized animals are nourished by proteins. Having sharp senses, eyes seeing well in dark, sharp paws, sharp teeth, alerted and energetic bodies, walking on their feet silently make them good hunters. They have sensitive hairs around eyes and nose which strengthens their hunting abilities.

They lose their fur hair in Spring and fall, and they have facial muscles that change as a reaction to anything happening. Muscle and Skeleton form are controlled perfectly and that is why no matter the position they fall from they always fall on their feet.

The cerebrum area is wide and indicates the intelligence of them. Also, the cerebellum is improved, which provides excellence in coordination.

Domesticated cats are either treated as holy creatures or are fed by people at home for hunting harmful animals like mice, rats, and insects for centuries. However, people have started to take them as close friends.

In recent years, one of the cats attracting people’s attention in Turkey or the world is Van Cat. However, as required care has not been shown so far, they face the loss of the species. The number of them has been decreasing day by day and the original breeds have been lost, while they were often seen in the region and almost every house had one in the past. People of Van call the cat pisik. They are not only seen as a pet or hunter of rats and insect but also a friend and member of the family and a good fellow accompanying the family members.

The cat is described by the people of the region as having long, white, silky fur, long body, tiger walking, fox-like tail. Different colors of eyes (dyschromatopsia), intelligent, agile is clean, friendly, loves playing and faithful to its owner and therefore these characteristics make it a rarely found cat. However, since the 1950s, the cat has been introduced to the world by Europeans but this unique cat has not been introduced fully.

One of the characteristics of Van Cat is the color of their eyes that you can easily recognize them.

How Can you Recognize a Vat Cat?

The blue-eyed color one usually shows blue, but amber color shows many differences intones. The tones are amber, light amber, yellow and green almond. Although very rare, sometimes brown color can be seen. Blue-eyed cats are classified as blue-eyed short, velvet furred cats and blue-eyed, long silky fur cats. The color of newly born kittens is grayish. 25 days after birth the color of eyes starts to change, and after 40 days the color reaches the final color. 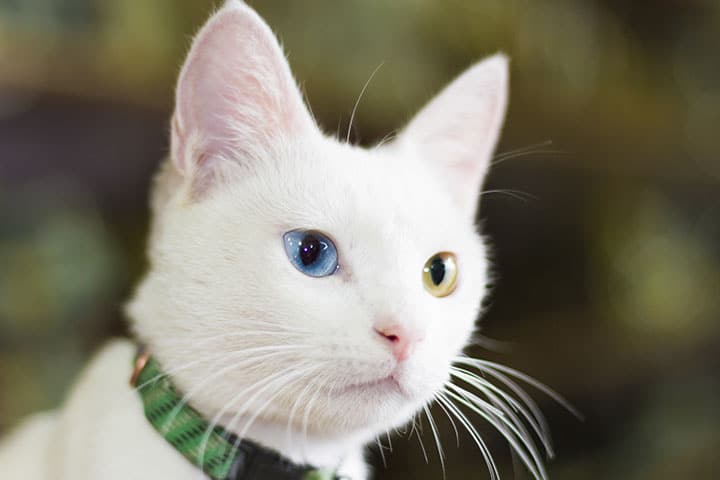 It is known that having the different color of eyes which human beings, dogs and doves face, is genetic defect syndrome.

The bodyweight of female ones is 2900 grams while males weigh 3600 grams.

Van Cats have the mating period in February, March, and June. This period lasts for up to 10 days. In the case of pregnancy during this period, no other mating period is seen in the same year. The pregnancy period is 62 days. The belly starts to swallow from the first month and the cat never lets anyone touch her belly. They like other cats prefer to give birth in the locations far away from vision, and for this reason, they start to look for an isolated and dark location from the first month of the pregnancy. Immediately after birth, the placenta of the kittens is cut by the mother. The mother cat suckles its kittens for 50-60 days. However, this period can be more or less.

They give birth to four kittens at one birth. The eyes of kittens are open on the 10th day. The mother licks its kittens to clean them and starts suckling immediately after birth. If the mother deems that the location is not safe, it finds a safe place and carries the kittens there. Mother hardly leaves its kittens alone and only leaves them to meet its needs.

The kittens still with closed eyes react to smells other than their mother and try to protect themselves.

The movement of the kittens at the beginning is like walking and crawling.

Kitten brothers/sisters usually fight for milk. They usually play with each other. Playing a game is an essential factor for development. The game is under control of the mother and the mother teaches its kittens how to survive. If the kitten is alone, it wants to play with its mother and if the mother is not there even it can play with other animals around.

The cats have strong control over the areas they are settled in. They do not want other cats to come to their living areas. When their living places or houses are changed, they try to return to the former place if they do not like the new one. Van Cats get used to their new living places in 20 to 30 days. During this period they examine the surroundings and are not interested in their owners.

The cats have more cleaning sense than other animals. They are considerably curious about the cleanliness of themselves and their living surrounding. After the toilet, they have the instinct to bury the dirt. They clean their mouths and faces with the help of their paws after eating and toilet.

The hunting characteristic of these species is extra superior. They hunt rats, mice, birds, flies, and insects indoor and outdoor, and eat them. They never attack poultry animals living with them in the house or out of the house.

They are very affectionate, giving head butts and love bites. Especially during pregnancy, they need love. They are very close to their owners and love them. When they see strangers they react and escape. They jump on the lap of the ones loving them. They are jealous of their owners showing affection to other cats and small kids. 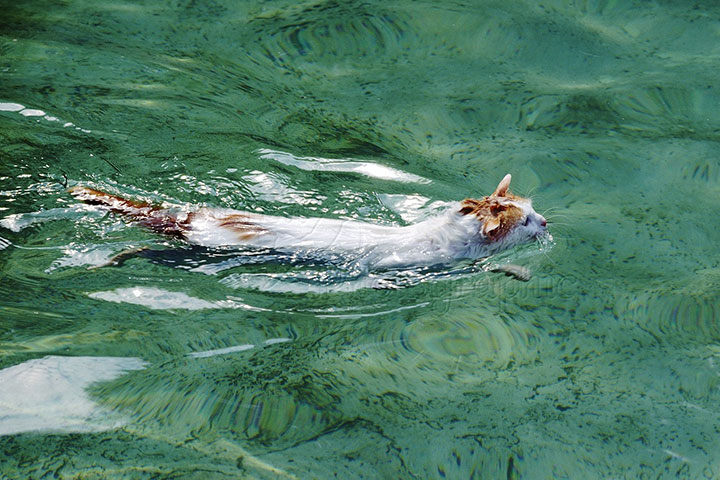 Although there is a belief that they suffer from deafness problem, only 2-3% of odd-eyed (dyschromatopsia) and blue-eyed cats suffer from this problem.

They love to swim in especially Lake Van, play with water and with this feature, it is the only cat species.

They check the meal if it is warm with their front paws and if the meal is warm enough they eat. It is also observed that they eat melon, watermelon, and some fruit.

Although the fur is quite thick, they are affected by the cold.

They produce some voices to communicate with each other and with human beings. The voices indicate their emotions. Their meowing has some varieties. Some indicate communication with human beings some indicate communication with their kittens or for their sexual activities. The sounds generated according to their needs have different intensity and frequency. They meow loudly when they see their owners in the morning to show their happiness. When they are hungry they go to the kitchen door and meows to indicate that they are hungry. 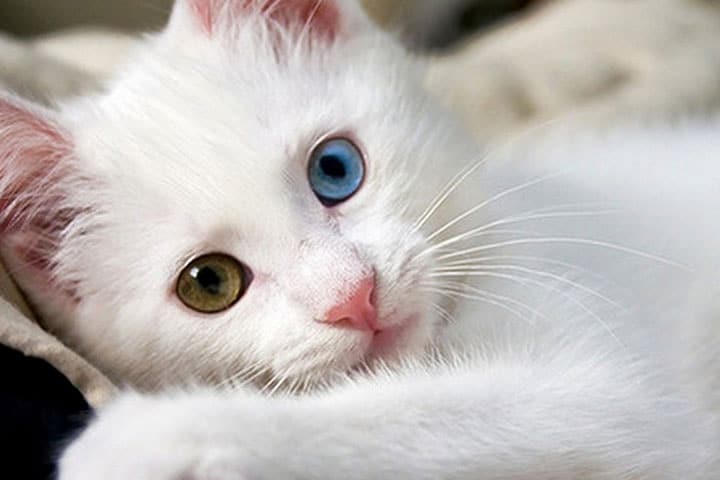 When the food is given, they show their gratefulness by touching their owner. When they need a toilet they go to the door and meow to ask their owners to open the door. It is also observed that if the door needs to be opened, they jump to the handle and open it.

The studies indicated that they respond to training very well. They understand what has been taught very quickly. They immediately learn the place where the soil is put for their toilet needs, and never try other places for toilet needs.

Kittens can learn their names when they are 2-3 months. However, it is thought that this learning is understanding the tone of the sound they are used to rather than learning the names.

It is necessary to take any actions required for the preservation of lovely, friendly, intelligent, faithful, beautiful and attractive Van Cats and a decrease of them.