Most of Istanbul’s children do not realize that Hans Andersen, whose stories have opened the doors to a world of fantasy, visited Istanbul. The Danish writer describes his first sight of the city with a metaphor worthy of a storyteller, likening each mosque with its dome and minarets to Noah’s Ark. Istanbul is a city of minarets, lighthouses, and towers, one being Maiden’s Tower (Kiz Kulesi) on an islet at the mouth of the Bosphorus which serves as a lighthouse, although Hans Andersen does not tell us about his first impression of this tower. Yet Maiden’s Tower is the building reminiscent above all of the Ark, standing as it does in the middle of the sea and greeting passing ships. I myself liken it to a hair slide preventing Istanbul’s hair from impeding shipping through the Bosphorus, and Istanbul to a mother rocking her child to sleep on a suspension bridge, in which case Maiden’s Tower becomes a baby’s bottle placed in water to cool the milk. The nearest towers to Maiden’s Tower are those of Selimiye Barracks, which looks like an upside down billiard table. 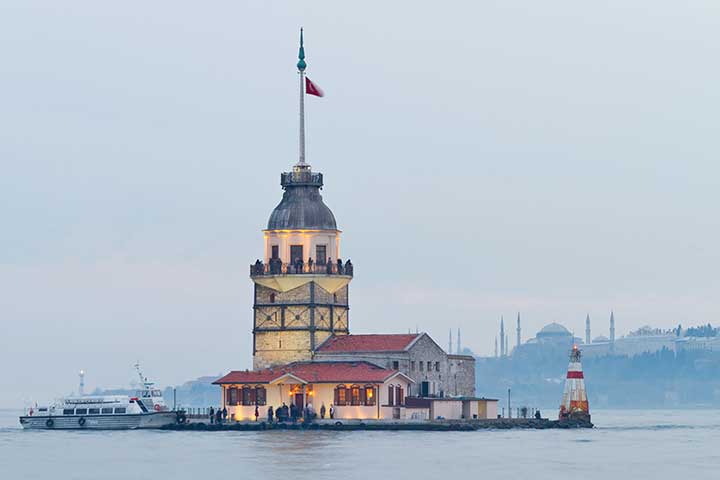 These towers have never guided ships at sea; instead, their light is that of Florence Nightingale, who reformed the British hospital here during the Crimean War, and revolutionized the nursing profession.

The Lady of the Lamp hurried from one tower of the barracks to another, relieving the suffering of the wounded. Visitors who arrive in Istanbul by sea usually unknowingly pass by another tower associated with caring for the sick: the Physician’s Tower at Topkapi Palace. In the past ships sailing out into the Marmara Sea would stop off the tiny island of Sivriada and the captain would look not ahead, but back at Selimiye Barracks, in order to line up the flagpole in the stern with the towers of Selimiye and the summit of Camlica Hill. The rudder would then be turned in this direction, and if the ship kept on a straight course it would eventually find itself entering the mouth of Canakkale Strait, which leads out of the Marmara into the Aegean. So the towers of Selimiye Barracks were like a signpost for mariners. Another signpost is the Galata Tower.

On traffic signs, a white arrow on a blue ground indicates a one-way street, and Galata Tower is like an arrow pointing up into the sky. The 17th-century scholar Hezarfen Ahmet Celebi was the first person to realize what the tower meant and making himself a pair of wings leaped off the parapet of the tower and glided to a safe landing on the far shore of the Bosphorus.

In one of his poems, painter and poet Bedri Rahmi Eyuboglu acts as a matchmaker for the Maiden’s and Galata towers, declaring that if the Maiden’s Tower had any sense it would marry the Galata Tower and bear a brood of children! However, shortly after Eyuboglu took up this matter in his poem, he proposed that the Galata Tower take a European bride, the Eiffel Tower. This second match took place, and the Galata Tower and Eiffel Tower gave birth to the cluster of radio transmitters on Camlica Hill, which is as shapely as their mother and as tall as their father! Beyazit Tower is the world’s largest monument to peace. Yes, you have not misheard me, so let me explain.

The tower was designed by the architect Senekerim Balyan as a fire tower, where lookouts kept watch over Istanbul night and day and signaled to the fire brigade when they saw flames.

Balyan was inspired by the shape of Ottoman cannon and built a tower that exactly resembled one. Since a weapon turned vertically upwards is a sign of surrender, the tower can be regarded as the largest and perhaps the first monument to peace ever built!

The towers of Kuleli Military High School are like two brothers holding hands and wearing conical caps made of newspaper to protect them from the sun who have gone down to the Bosphorus shore to catch fish. Haydarpasa Station, on the other hand, is Istanbul’s tower gate into Anatolia. Many people arriving from the provinces to Istanbul for the first time by train have first seen the sea, seagulls, and smoking ferry funnels from this gate between its two towers.

Sultan Abdulhamid II built clock towers in many towns around Turkey, and Istanbul got its full share with three; the Dolmabahce, Yildiz and Tophane clock towers. However, since these are not situated in busy parts of the city, it is rare to find anyone arranging to meet beneath them. Still, these towers are important when it comes to telling the time in Istanbul. Indeed, you can work out the time without even looking at the dials. How? By looking at the shadows the towers throw.

Then there are the church towers, which in the company of minarets reach into the sky like compass points to draw a world of friendship and brotherhood. In class, pupils raise their hands to ask permission to speak, and a city with towers must have something to say too. So listen to Istanbul and hear the stories it has to tell.