History is full of curious contradictions: heroic acts born of cowardice, and sparks of compassion amid ruthless conflict. One such example is Florence Nightingale, who not only transformed health care for soldiers during the Crimean War but whose work changed the whole concept of nursing and hospital care throughout the world. The Ottoman Empire, which began as a minor principality in the 13th century, snuffed out the Eastern Roman Empire in the 15th century, and in the 16th century became the world’s largest empire, stretching from Central Europe to Iran, and from North Africa to the Crimea. But in the 17th century, the tide began to turn against Ottoman Turkey as the colonial conquests of the European powers in America, Africa, and Asia gave them economic and political supremacy. The Ottoman decline was further accelerated by the rise of nationalist movements after the French Revolution, and in the 19th century, France and Britain began intervening even in Ottoman internal affairs. When oil reserves in the Middle East gained strategic importance, clashes of interest arose between the western powers. At this point, Russia entered the arena in the role of protector of the Orthodox communities in the Ottoman Empire, and this led to conflict between Russia and France, respectively upholders of the Orthodox and Catholic communities in Palestine. In January 1853 a Russian army of 150.000 men encamped on the banks of the River Prut, and an extraordinary envoy was sent to Istanbul by Prince Menshikov demanding that Russia is recognized as the protector of the Orthodox peoples of the empire. When this demand was rejected, Russian forces began occupying Wallachia and Moldavia. Britain took the side of Turkey, which declared war on Russia in October 1853, and after Russia destroyed a Turkish fleet in the Black Sea, Britain and France entered the war on the Ottoman side in March 1854. After the Russian attack on Sinop, the British and French fleets sailed across the Black Sea and besieged Sevastopol in the Crimea. Hospitals were needed for the British and French wounded, and the Ottoman government turned over Selimiye Barracks, a vast building in Uskudar, a second building in Tarabya and Haydarpasa Military Hospital to the allies. Selimiye Barracks had originally been built during the reign of Selim III (1789-1807) but was burnt down in a janissary uprising. Construction of the new barracks commenced during the reign of Mahmud II (1808-1839) and was largely completed during the reign of Sultan Abdulmecid (1839-1861). 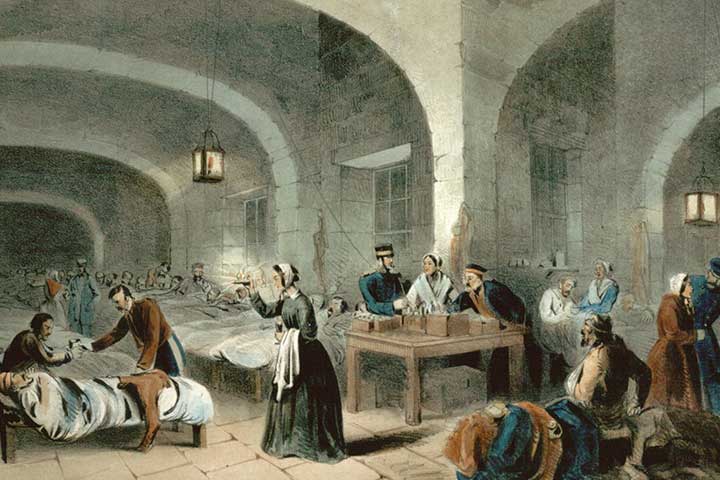 The Black Sea and the Balkans reeked of blood and gunpowder, but in this tragic scene of death and destruction, there was one person who redeemed faith in human nature. This was her, who, lamp in hand, worked night and day to relieve the sufferings of the wounded soldiers in Selimiye Monument Barracks. Her compassion and dedication lit up the darkness of war.

Who was Florence Nightingale?

The daughter of a wealthy English family, she was named after the Italian city where she was born on 12 May 1820. Her father taught Florence himself, and she received a remarkable education for a woman of her time in Greek, Latin, German, French, history, philosophy, music, and art. She was deeply religious and around the age of 18 came to believe that serving humanity was the best way to serve God, and decided to devote her life to improving the human condition. Around the same time, she began to study mathematics, for which she discovered a passion, but only persuaded her parents to allow her to take mathematics lessons after overcoming their vigorous opposition. In 1845 she revealed her desire to become a nurse to her horrified family. There followed six years of desperate unhappiness, which culminated in 1851 with Florence rebelling against her family and spending several months training as a nurse at Kaiserwerth in Germany. In April 1853 she was given an administrative post at the Institution for the care of Sick Gentlewomen in Distressed Circumstances, and that summer when there was a cholera epidemic she worked at the Middlesex Hospital. On 5 November 1854, she was sent to Istanbul at the head of a party of 37 nurses. More injured and sick soldiers were dying in the British hospital in Selimiye Barracks in Istanbul than in the Crimea. Due to British government bureaucracy, there were severe shortages of food, medicines and medical equipment and standards of care and hygiene were dismal. It was as an administrator rather than a nurse that she managed to transform the hospital. She made sure that the patients were fed properly, established a laundry, reading room and recreation room, and even a postal system so that the patients could correspond with their families. Having set the hospital in order, in May 1855 she took a group of nurses to the Crimea to inspect the British hospitals there. In Balaklava, she caught a serious fever and was brought back to Istanbul to recuperate. In 1856 she was appointed General Superintendent of the Female Nursing Establishment of the Military Hospitals of the Army by the British government. 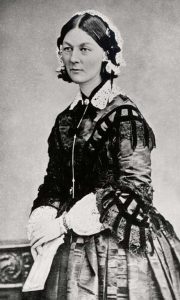 When Austria resolved to enter the war on the side of the allies, Russia agreed to a peace, and the war which had resulted in the death of a quarter of a million men on each side, and left thousands more disabled at last came to an end in February 1856. Sultan Abdulmecid presented her with a valuable bracelet for her work and distributed 1000 gold sovereigns among the nurses. After the hospital closed down, she returned to England. Back home she campaigned ceaselessly for improvements in medical care in the British army, discussing the subject with both Queen Victoria and the minister of war. Thanks to her efforts a commission was set up to reorganize military hospitals. In 1860, financed by the Nightingale Fund to which the public had contributed 45.000 pounds, she established the Nightingale Training School for nurses. Until the end of her life, she worked to improve hospitals, and in 1907 King Edward VII awarded her the Order of Merit, the first time it had ever been given to a woman. She died in London in 1910 and was buried according to her wishes in the family grave at East Wellow in Hampshire. On 7 April 1954, the ground and first floors of the north-west tower at Selimiye Barracks were turned into a museum by the Turkish Federation of Nurses in commemoration of the centenary of her arrival at the barracks. The ground floor room which she had used as an examination room contains some medicine bottles and medical equipment used during the Crimean War, and clothing, desk, chair, lamp, mirror, couch, and carpet used by her. The second-floor room was her sitting-room, and here there are photographs and pictures dating from the time when the barracks was used as a hospital, an original letter in her handwriting and copies of several others donated by the Nightingale School in London, her table, coffee service, and some photographs of her.

The week beginning on her birthday, 12 May, is celebrated all over the world as Nurses Week, inaugurated by the World Health Organisation in 1954, and Turkey’s first higher education institution for nurses, which was established in 1961, was named after Florence Nightingale.