The city of Bursa, which lies at the foot of a great mountain in northwest Turkey, was once capital of the Ottoman Empire, and its historic buildings bear witness to an illustrious past. Here you can wander through the courtyards of hans where merchants exchanged their wares, and the covered bazaar whose shadowy passages smell of silk and spices; past Turkish baths with their steaming basins, and old mosques with their tinkling fountains. After greeting the resting places of the early Ottoman sultans, the winding hill which descends from Muradiye to Tophane seems to take pause at the high walls of a great mosque. The 17th-century writer Evliya Celebi described Bursa as the fifth holy city after Mecca, Medina, Jerusalem, and Damascus, and Ulu Mosque symbolize this aspect of the city. The covered bazaar and historic hans in the maze of back streets behind the mosque bring you face-to-face with six centuries of history.

If you climb the steps up to the northward facing terrace of Ipek Han (the Silk Exchange), you get a marvelous view of Bursa’s two main landmarks: the towering mass of Mount Uludag, the ancient Bythinian Olympus, and standing in its protective embrace the Ulu Mosque. The cool breeze from above seems to tell the myths and legends of the mountain, and go on to the story of the mosque.

As the story goes, on the eve of the Battle of Nigbolu in 1396, Sultan Yildirim Bayezid was praying for victory and vowed that if his wish was granted he would use the spoils of war to build twenty mosques in the city. The battle was won, but Emir Sultan, a descendant of the Prophet Muhammed, advised the sultan to build not twenty mosques but a single great mosque with twenty domes. Construction took four years. Ulu Mosque is one of the most important examples of early Ottoman architecture.

Measuring 55 by 69 meters, its thick outer walls are built entirely of ashlar stone. Each wall has pairs of windows arranged in two courses in niches with pointed arches. Of the two tall minarets flanking the north facade, one was built at the same time as the mosque itself, while that at the east corner was added a few years later, probably by Celebi Mehmet. The imposing portal dominating the north facade was badly damaged by fire, and in subsequent repairs over the centuries has lost its original character. There are two other plainer doors in the east and west facades.

The domes are just over 10 meters in diameter. The central dome facing the side doors has an open top with a lantern. This is located above the sixteen-sided marble pool which is surrounded by a platform and railings. 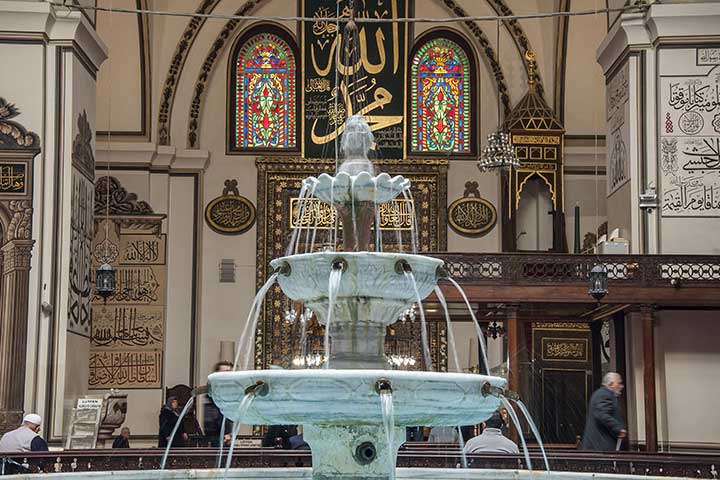 Having gazed at your fill at this lovely pool on first entering the mosque, your attention is drawn to the intricate inscriptions on the columns and walls, some in large-scale sulus and talik scripts by renowned calligraphers Mustafa Izzet, Abdulfettah and Sefik. Altogether the mosque contains 192 inscription panels by 40 calligraphers, including two women, Islimyeli Iffet Hatun and Hatice Huriye Hanim. Most of these inscriptions date from the 19th century, and those by Mahmud, Hoca Ali and Katipzade Hasan are known to date from just before the earthquake of 1855, in which two of the domes collapsed and cracks were caused in the domes, drums, and arches. This damage was repaired on the orders of Sultan Abdulmecid. But the greatest damage suffered by the mosque throughout its long history occurred soon after it was built, in the early 15th century.

Following the defeat of Yildirim Bayezid by Timur’s armies in 1402, the mosque was used as a stable by Timur’s soldiers, and in the subsequent revolt of the Karamanogullari principality against the Ottomans Bursa was occupied, and the rebels piled wood against the walls of the mosque and set it alight.

The mihrab (prayer niche) of the Ulu Mosque is magnificent, with eight rows of stalactite carving. This niche underwent repairs and extensive alterations following the 1855 earthquake, and again in 1904 when it was decorated with gilding and inscriptions by Mehmet Usta. The wooden minbar (pulpit) of the mosque is a masterpiece by Muhammed bin Abdulaziz of Gaziantep, whose work can also be seen in the Manisa Ulu Mosque. On the east side of the pulpit is an unusually carved panel depicting the solar system with the nine planets then known. The muezzins gallery facing the pulpit was built in 1549, and the marble raised seat for delivering sermons facing the gallery dates from 1815.

Having captured the enchantment of Bursa in this ancient mosque, it is time to continue exploring the old city, where past centuries seem as vivid as the present.