Before the arrival of paddle steamers in Istanbul, ferry services on the Golden Horn and the Bosphorus were provided by the long narrow rowing boats of various types known as kayik. These graceful swift boats and their boatmen were a characteristic part of life in Istanbul.

The largest and most magnificent of all these vessels were the royal barges used by the sultans and members of their families. Measuring 30-32 meters in length and 3 meters wide, they had a pavilion in the bow where the sultan sat. The royal barges used when the naval fleet set out to war were known as filika, and those used when he intended to pay incognito visits to the city as tebdil kayik.

Market kayiks were used to carry both goods and passengers. They were heavy and broad, with rudders at the stern. They could take nearly 40 passengers, and each oar weighed 80 kilos. Sometimes they were privately owned and sometimes the property of a charitable foundation, in which case the proceeds were used to pay for diverse requirements of the village to which it was endowed and food for the poor. The boatmen leased these boats from the Department of Charitable Foundations for a specific number of years.

Another type was the fireboats, which carried the teams of firemen rapidly to the nearest point on the shore in the event of a fire. They were always moored up at the Galata Bridge over the Golden Horn. Then there was the fishing kayiks, distinguished by up curving prows and sterns, and sturdily built to withstand bad weather. 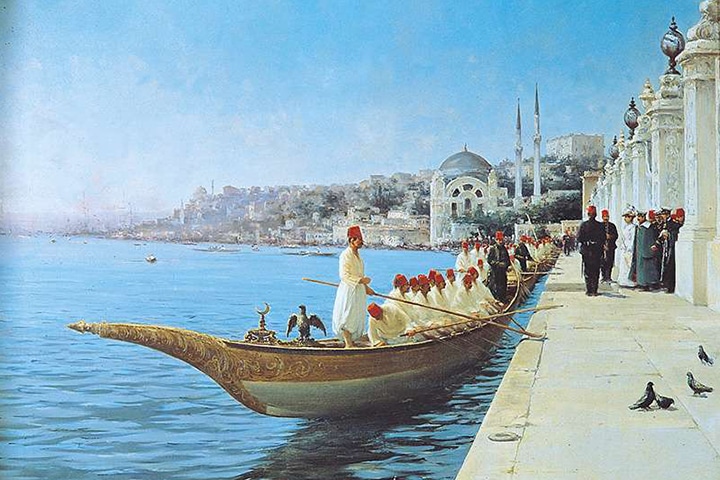 The slender futa kayiks had rudders in the stern and seats covered in rich clothes for their passengers. These were originally inspired by English skiffs but modified in time to suit Turkish tastes and traditions of boat building.

Kayiks known as piyade were usually privately owned by wealthy families, but some could also be hired out for excursions. Peremes had higher and flatter prows than the piyades, and like the market, kayiks were used to carry goods and passengers. These were equipped with sails for use when the wind permitted so that they could make quicker progress.

Mavnas were heavy barges that carried goods between the city and the villages of the Bosphorus. A special type of kayik known as saz kayik carried groups of musicians who played music to moonlight parties held on the Bosphorus during the summer months.

Most of Istanbul’s kayiks were made of linden wood. They were varnished below the waterline, and the part below the gunwale was painted in various colors. The narrow boards on the inside were painted white and kept spotlessly clean. The gunwales were decorated so that the boats skimming across the water made a pretty sight. 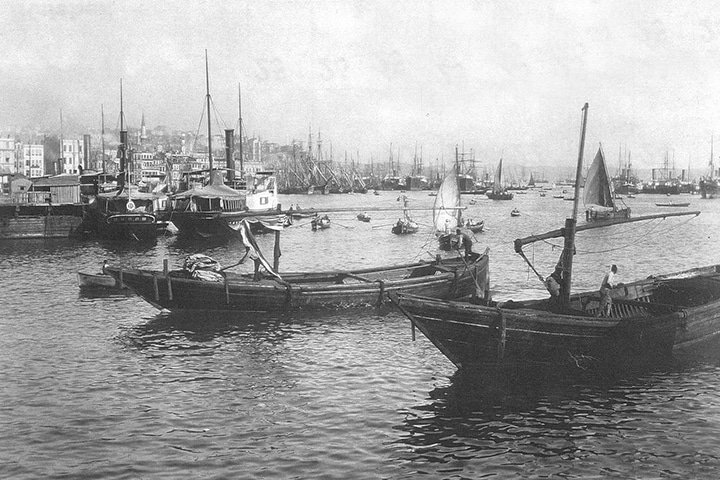 Istanbul’s boats and boatmen were strictly regulated, and every boat had a specific mooring. The main routes linked Uskudar on the Asian shore of the Bosphorus, Galata on the European shore, and the quays along the Golden Horn and the Bosphorus.

Those wishing to work as boatmen had to find someone to act as a guarantor, and they were supervised by stewards known as peremeciler kethudasi.

The steward of Uskudar, for instance, was usually a janissary, since most of the boatmen at this quay were former janissaries.

Payment received by the boatmen was based on the number of oars. The boatmen had a distinctive form of dress, varying only in quality, that of the piyade boatmen being the finest. They were provided with suits of clothes which consisted of two pairs of breeches made of broadcloth and calico respectively, long white socks, a broadcloth waistcoat and jacket embroidered in silk, a crèpe shirt, a headscarf with a patent leather rose bow, and fez. Rich families had their boat liveries made by tailors known as mir and kotero who had shops in Beyoglu.

The boatmen were noted for their courtesy and fine physique and plied the oars with such speed and skill that from a distance it seemed as if a single oar was moving. When women were embarking and disembarking, the oarsman at the front stood so that the women could steady themselves by holding onto his shoulder.

Istanbul’s boats and boatmen formed an integral part of the city’s life, as voiced in Turkish literature by Abdulhak Sinasi Hisar, who describes in poetic language the role of boats and boatmen in the moonlit excursions which were once one of the greatest pleasures of the upper classes. These outings, accompanied by musicians in their saz kayik, took place in the fairytale atmosphere of the Bosphorus. Classical Ottoman poets like Nedim, Enderunlu Vasif, and Enderunlu Fazil also wrote many odes about kayiks, and novels by nineteenth-century writers like Halit Ziya Usakligil and Mehmet Rauf, who was a seaman, have left us vivid accounts of the boats and boatmen which were once so important a part of daily life.

Let us plan the most out of it for Istanbul including a 2-hours Bosphorus Cruise ride on a private motor-yacht with your private guide and tell you more about it. Either on a traditional kayik (as on the above photos), a vintage classical wooden one or a modern motor-yacht; we will make sure you have an amazing time.