Ibn Battuta started on his travels when he was 20 years old in 1325. His main reason to travel was to go on a Hajj, or a Pilgrimage to Mecca, as all good Muslims want to do. But his traveling went on for about 29 years and he covered about 75,000 miles visiting the equivalent of 44 modern countries which were then mostly under the governments of Muslim leaders of the World of Islam, or Dar al-Islam.

The Seljuk Turks were nomadic herdsmen of sheep and horses who lived in the grassy steppes near the Aral Sea. As their population increased, the high green valleys of Anatolia (now part of modern Turkey) became tempting. The Seljuks developed a highly effective fighting force as they attacked their neighbors on horseback and claimed their lands. These Turks were feared and respected, even recruited as paid soldiers of other kingdoms (such as in Egypt where they would take over as the mamluk or “slave” dynasty). So the Seljuk conquests began in Anatolia. In 1071, the Seljuk cavalry defeated the mighty Byzantine army. From that point on, a series of nomadic groups crossed over into Anatolia and spread out over the central plateau. The Byzantines had given up all but the west quarter of this region near their capital, Constantinople (modern-day Istanbul), and a new Muslim society was emerging in Anatolia.

When the Seljuk commanders settled down in Konya, their capital, and in other Greek and Armenian towns, these former herdsmen and warriors took up the ways of the city. The leaders had close contacts with the Abbasids in Persia. The Seljuk state extended from Central Asia to the plateaus and valleys in Asia Minor (Turkey). It became a well-administered Sunni state under the nominal authority of the Abbasid caliphs at Baghdad.

There were still large Christian populations in the towns along the coast. The process of conversion of all of Anatolia was slow during the 1100s. The Byzantines and the Turkish Sultans were usually at peace and they treated each other mostly with respect and diplomacy.

The Mongol invasions (in 1243 and again in 1256) changed all that. The Turks were pushed from Central Asia into the towns and valleys of Anatolia which increased the Turkish population greatly. By 1260 Mongol armies were lodged in most important towns of Anatolia and had settled down to the business of taxation and keeping order. But there was little of the terror and destruction that the Mongols had caused in Persia and Iraq. And the Seljuk Turk Sultan kept power by paying tribute to the Mongol Il-Khan who now lived in Persia. The Seljuks had put up mosques in the former Greek cities and their architecture was influenced by Greek and Byzantine architecture and culture. Persian Muslim scholars, secretaries, and architects had been invited to come to work in Anatolia. Konya, the capital city, was an international center of learning, art, and Sufi teaching. These Turkish cities were becoming more Muslim and more Persian than ever before.

And the trade was what was important to the economy. The Turks had established vast trade routes and had built huge caravanserai (camel inns) to encourage trade. Armed guards escorted the travelers on the caravan routes to Persia and part of the way to China as part of the Silk Road.

There was still warfare, however, between Seljuk leaders. “The Seljuk princes of these states ruled simply by virtue of their fitness as Turcoman war captains, the biggest of the ‘big men’ who succeeded in gathering a larger following of mounted archers than their rivals with promises of booty and land.” One of these groups under the leadership of the descendants of Osman (known as Ottomans) would soon take over all of Anatolia. They would later conquer Greece and other parts of Eastern Europe, and eventually would take over northern Africa all the way to Ibn Battuta’s homeland of Morocco! Ibn Battuta arrived at a period of decline of the Seljuk Turks and the Byzantines, and at the rise of the Ottoman Turks. He would meet the son of Osman on this trip. 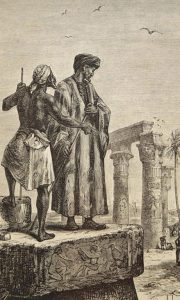 Ibn Battuta had spent about one year in Mecca studying and making his third pilgrimage. He had been thinking more and more about going to get work under the Sultan of Delhi, now part of Muslim controlled India. The sultan was welcoming scholars and judges from abroad and gave them high-paying jobs. But first Ibn Battuta had to find a guide, someone who could speak Persian and knew India well. So in 1330, he went to the town of Jidd on the Red Sea. After looking unsuccessfully for a guide to India for several months, he decided to continue his travels. This time he would go northward to Anatolia (modern Turkey). From there he could connect with Turkish caravans going to India. He traveled back to Egypt where he met a friend, and they went by caravan to Damascus, Syria.

Ibn Battuta’s small group left Syria on a large galley (a trading ship) belonging to the Genoese (from Italy) and arrived at Alanya. This town was a busy trading port, especially known for its wood which was shipped to Egypt and Syria.

“[We] set out for the country of the Turks. … It was conquered by the Muslims, but there are still large numbers of Christians there under the protection of the Turkmen Muslims. We traveled on the sea for ten nights, and the Christians treated us honorably and took no passage money from us. On the tenth day, we arrived at Alanya [where the province begins]. This country … is one of the finest in the world; in it, God has brought together the good things dispersed throughout other lands. Its people are the most comely (handsome) of men, the cleanest in their dress, the most delicious in their food, and the kindliest folk in creation. Wherever we stopped in this land, whether at a hospice or a private house, our neighbors both men and women (these do not veil themselves) came to ask after our needs. When we left them they bade us farewell as though they were our relatives and our own folk, and you would see the women weeping out of grief at our departure.”

While he praised the Turks’ hospitality and their commitment to the Sunni Muslim faith, he was surprised that “they eat hashish [Indian hemp, a type of drug-like marijuana], and think no harm of it.”

“There is a magnificent and formidable citadel [or fort] at the upper end of town. … At the northwestern corner is a place where prisoners condemned to death were hurled over the precipice by means of catapults.”

“From Alanya, I went to Antaliya [Adalia], a most beautiful city… one of the most attractive towns to be seen anywhere… Each section of the inhabitants lives in a separate quarter. The Christian merchants live in a quarter of the town … and are surrounded by a wall, the gates of which are shut upon them from without at night and during the Friday service. The Greeks … live by themselves in another quarter, the Jews in another, and the king and his court and mamluks (slaves) in another, each of these quarters being walled off likewise. The rest of the Muslims live in the main city. Round the whole town and all the quarters mentioned, there is another great wall.”

In every town that Ibn Battuta visited, he was welcomed into a fraternity of Muslim brothers. They provided him with food and shelter and even competed with other fraternities for the honor of entertaining their guests.

“We stayed here at the college mosque of the town… Now in all the lands inhabited by the Turkmens in Anatolia, in every district, town, and village, there are to be found members of the organization known as the … Young Brotherhood. Nowhere in the world will you find men so eager to welcome strangers, so prompt to serve food and to satisfy the wants of others… The members of this community work during the day to gain their livelihood, and bring … what they have earned in the late afternoon. With this, they buy fruit, food, and the other things which the hospice requires for their use. If a traveler comes to town that day they lodge him…. and he stays with them until he goes away. If there are no travelers they themselves assemble to partake of the food and having eaten it they sing and dance. On the morrow, they return to their occupations and bring their earnings to their leader in the late afternoon.”

Ibn Battuta also visited Konya, the famous home of the Sufi poet Rumi. Dance and whirling were popular in Turkey and Persia with the Sufi brothers. It was a way to become in ecstasy with God, as if in a trace. Below is a modern ceremony – the dancers are sometimes called “whirling dervishes”.

He also stayed at the homes of important leaders, some of them related to the Il-Khan of Persia himself! And at each place, as was the custom, he was given “hospitality gifts”: sometimes money, fine robes, a horse, or even a slave, and often a letter of introduction to some host in the next city on the trip. He praised most of the hosts, especially for their generosity towards him, and criticizes one as “a worthless person”.

“…A remarkable thing which I saw in this country was the respect shown to women by the Turks, for they hold a more dignified position than the men. … I saw also the wives of the merchants and common [men]. [Their faces are] visible for the Turkish women do not veil themselves. Sometimes a woman will be accompanied by her husband and anyone seeing him would take him for one of her servants.”

However, in one town he is critical of the treatment of slave women.

“The inhabitants of this city make no effort to stamp out immorality – indeed, the same applies to the whole population of these regions. They buy beautiful Greek slave-girls and put them out to prostitution, and each girl has to pay a regular due to her master. I heard it said there that the girls go into the bathhouses along with the men, and anyone who wishes to indulge in depravity does so in the bath-house and nobody tries to stop him. I was told that the [governor] in this city owns slave-girls employed in this way.”

In November of 1331, Ibn Battuta and three friends, two slave boys and a slave girl and with several horses and gifts from governors and hosts, started out toward the Black Sea. He had benefited greatly from the generosity of the Turks. But this next part of the trip was difficult. He was caught in a raging river; mislead by a guide who got the party lost and demanded money; and then almost froze to death in the wilderness. But they arrived at the port of Sinop on the Black Sea and were ready to leave to the steppe lands – the home of the “Golden Horde”.

Ibn Battuta stayed in Constantinople for more than a month. He even got to meet the emperor, Andronicus III. He saw many of the sights of this capital city of the Christians – the new Rome. He even saw the great Christian church of Hagia Sophia though he did not go inside. But as it is said, “Byzantium in the 1330s was a minor Greek state of southeastern Europe and little more. Its international trade had been abandoned to the Italians, its currency was almost worthless, its landlords were grinding the peasantry unmercifully, its army was an assemblage of alien mercenaries, and its Asian territories had been all but lost to the triumphant Turks. It was a state living on borrowed time and past glories”.