Heading westwards across the fertile plain watered by the Gediz River, you suddenly catch the salty scent of the sea in the air. Then a monumental tower thought to have been built by one of the generals of Alexander the Great comes into sight at the right-hand side of the road next to a Roman bridge. Then you cross the pine-clad hills and suddenly find yourself facing the blue Aegean, a coast indented with bays stretching out in both directions, the sand beach of Orak Island, lighthouses, and the minaret of Fatih Mosque. Gazing upon this entrancing landscape, it feels as if you only have to reach out to touch the sails of the yachts, the nets of the fishermen and the light of the lighthouse.

At the entrance to the town, there are statues of seals, which are both the origin of Foca’s name and its mascot. The small colony of just nine Mediterranean seals (Monacus monacus) is protected under a program supported by the Worldwide Fund for Nature, and it is forbidden to dive and fish in the sea around the cliffs where they live. The name “Foca” comes from the ancient Phokaia, which means ‘town of seals,’ and many coins minted here bear the figure of a seal. 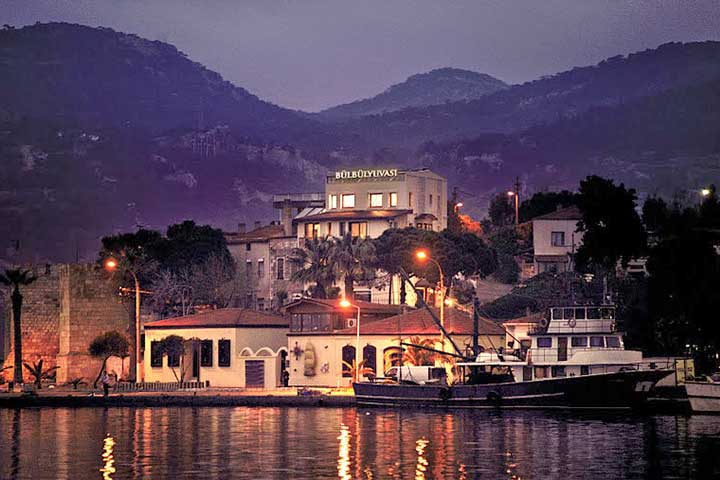 It was founded by the Aeolians in the 11th century BC and expanded in both size and wealth in the 9th century with the arrival of Ionians from Kyme, Erythrae, and Teos. The Phokaians established colonies far and wide, not only on the Aegean, Mediterranean, and the Black Sea coasts, but at Elea (Velia) in Italy, Alaia in Corsica, and Marseille in France, using boats with 50 oars capable of carrying 500 people.

The historic tie between Foca and Marseille is commemorated today in a special friendship between the two ports. Navigation and trade brought prosperity to Phokaia, whose earliest settlement was on an island that today is a peninsula joined to the mainland and lying between two bays known as Buyuk Deniz and Kucuk Deniz (Big Sea and Little Sea). In the 13th century, it came under the rule of the Seljuk Cakabey, and in 1455 became part of the Ottoman Empire. The castle at Bes Kapilar was constructed during the reign of Mehmed II (1451-1481) and repaired by Suleyman the Magnificent (1520-1566). The section of the castle used for open-air concerts today is the former Ottoman boatyard. There are two Ottoman mosques on the peninsula, the Fatih and Kayalar.

Archaeological excavations are continuing in this part of the town, where you will come across the remains of an ancient wall and a mosaic pavement belonging to a 4th or 5th century Roman villa, as well as carefully restored stone houses more than a century old. Almost all the streets in Foca lead down to the sea, where the wind ruffles the waves and small boats dot the surface. From an Ottoman period almanac dated 1891 we learn that Eski (Old) Foca had a population of 14548, that its municipality had an annual income of 30,000 kurus, and that 81 lamps illuminated the streets. The almanac warns that since the streets are so narrow, the municipality must clean them well. Yeni (New) Foca had a population of 7002. 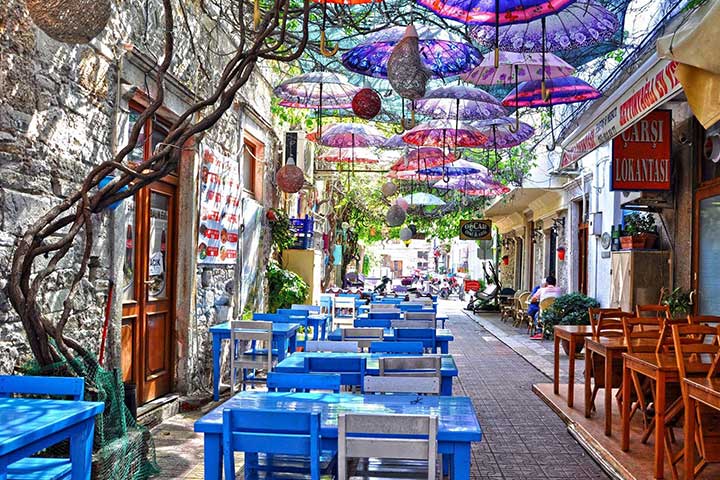 Walking along the seafront as the sun begins to sink towards the horizon, the fishermen mending their nets join in the conversations of the strollers. The fishing boats set out to sea at sundown, and meanwhile back onshore, the fish restaurants begin to bustle in readiness for their evening customers.

The fresh seafood is delicious, and local specialties include fish with yogurt and savory pastry known as Albanian borek. Yeni Foca is 20 kilometers away along a road that winds along the coast past innumerable lovely bays that are quiet and deserted during the week and perfect to stop for a swim.

Yeni Foca was founded as a naval base by the Genoese, who called it Niyez Fokez or Phokainova. Alum was mined here for use in the dyeing industry and a local stone known as “focateyn” was quarried for millstones. Streets of stone houses built by the Anatolian Greek inhabitants of the town are in a good state of preservation, but otherwise, there are no old buildings here.

After wandering through these streets, a delicious smell of grilling fish draws you towards one of the numerous restaurants, and you find yourself seated at a table enjoying more local flavors.