Butterfly Valley opens onto a cove near Fethiye on Turkey’s southwest coast. This deep steep-sided valley has a floor of approximately ten hectares in an area where almost all the butterfly and moth species from the Mediterranean coastal region are to be found, making it an open-air natural history museum. The abundance of Lepidoptera is owing to the humid microclimate created by waterfalls in the valley, and also to the hundred or so different plant species found here. The butterfly which inspired the valley’s name is the so-called leopard butterfly (Euplagia quadripunctaria), one of the liveliest members of the Arctiidae family. Between June and October, hundreds of these butterflies gather in a large colony here.

For nine or ten months from late winter onwards, it is possible to follow the full life cycle of the butterflies of the valley. Here naturalists have identified around 35 butterfly and 40 moth species, the latter including some of the Mediterranean region’s most strikingly patterned species, Sphingidae. 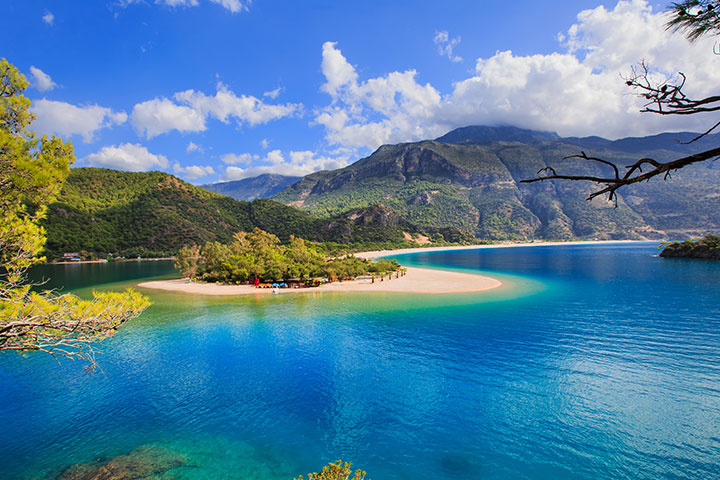 Most people make day trips to the valley by boat from the Oludeniz lagoon, a trip of 30 minutes. The boats usually stop off on the way at the Blue Cave, and if the captain of your boat stays here long enough for a swim, do not miss the chance to swim into the cave and experience the full impact of its beauty. 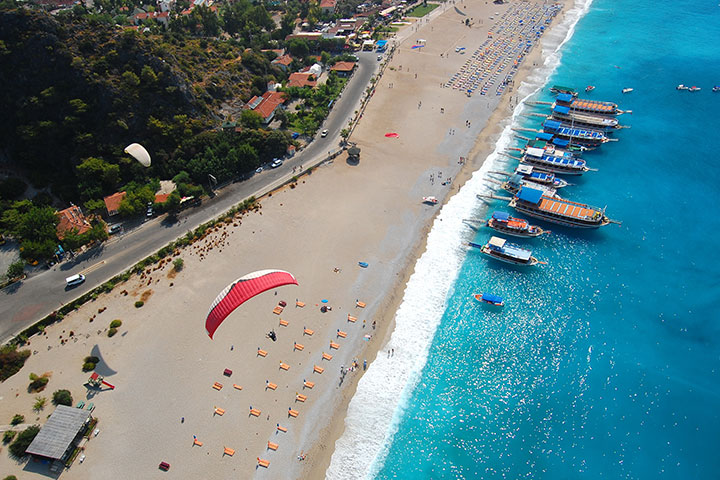 The valley lies in the foothills of the 2000 meter high Mount Babadag and runs between soaring rock walls. An alternative way to arrive is by hang-glider off Babadag, so making a spectacular flying start to your visit.

How to Get to Butterfly Valley?

There are two paths through the valley, one leading to the waterfalls and the other to the village of Faralya. The first path leads you past many different plants, flowers, and trees, and the fragrance of thyme and other aromatic plants saturates the air. As you walk deeper into the valley the rock walls close in. If you are lucky you will come across flocks of butterflies that scatter at your approach. During our walk, I and my friend Rifat Kilar, a keen amateur entomologist, chanced upon a pair of large-tailed Machaon butterflies in the process of mating. This type of butterfly is a rare sight under any circumstances, and we were lucky that they posed for us for several minutes, preoccupied with their affairs.

The valley comes to a dead-end at high sheer cliffs, down which two waterfalls cascade to the ground. We showered under the falls as a reward for reaching our destination. The second path leading to the village is so extremely steep that as a safety measure ropes have been left at a couple of critical points. If the panic does not get the better of you, negotiating this difficult route is well worth the exertion. As you climb higher magnificent views of Butterfly Valley are spread at your feet. When you eventually reach the village you see a sign reading George House. The first Americans who came here years ago stayed in the house of Ridvan Karaburun and dubbed his house after their friend George whom they likened to their host. Foreigners who came to the valley subsequently on their recommendation began to ask for George House, and so Ridvan Karaburun put up a sign. During your visit to George Ridvan’s house, you can eat a delicious meal of local village cuisine accompanied by a refreshing drink of ayran (yogurt and water drink).

Over recent years many people have come to Butterfly Valley not just as day-trippers from the lagoon, but to stay and enjoy its scenery wildlife at leisure. They include naturalists doing research and young visitors and students who come here for alternative holidays. Building development is prohibited in the valley, but those who wish to stay overnight may use the shelters covered by branches and leaves, platforms built in the trees, or bring tents with them. In the evenings as the campfire blazes on the beach, you can watch the stars.

There is no electricity, telephones, television, buildings or roads in the valley, proving that tourism can thrive without any of these modern conveniences and that unspoiled nature alone is what many come to Turkey.

Turkey is a country at the junction of three continents, and both its flora and fauna are exceptional in their diversity. Some of the most spectacular members of the world of butterflies and moths, Machaon and Podalirius of the Papilionidae family, are widely found in every region of Turkey. A rare butterfly, Alexanor, which is not found in Europe at all, is found in some areas of the country. Endemic species found in limited areas of the country are an important illustration of Turkey’s biological diversity, such as Maniola telmessis found in Fethiye which is a subspecies of the more widespread Maniola jurtina. The name Telmessis refers to the ancient name for Fethiye. Apollo butterflies are a Turkish species that lives at an altitude range of 2000 – 2500 meters and is larger than its European counterparts.

Cabbage whites – Pieris rapae, the chrome yellow Colias, and red admiral Vanessa atalanta are widespread all over Turkey. Painted ladies are found across much of the world and migrate in large flocks. Another migrating species, Danaus Chrysippus, is one of the Mediterranean region’s loveliest butterflies. The tiny Ypthima is common in southern Turkey but unknown in Europe, while Krinia Roxelana and Archon Apollonius are only seen in Turkey and Greece.

Lepidoptera species tend to show very slight variations between the northern and southern parts of Turkey. For example, the Gonepteryx rhamni of the north is replaced by the Gonepteryx farinosa of the south, while the Limenitis camilla makes way for Limenitis reducta and Argynnis paphia for Argynnis pandora. These fine local distinctions reflect the rich subspecies potential in Turkey.

Unfortunately, no fully comprehensive list of all the butterflies living in Turkey has ever been drawn up, and at high altitudes, in the southeast and eastern Turkey, no systematic research has been carried out at all. Information about Turkish moth species is even more sparse. A massive three-volume work entitled Die Tagfalter der Turkei published in London by Classey in 1996 is the most comprehensive study of the subject at present.