As your plane circles down towards Dalaman, you realize that the view from your porthole has changed from sky blue to pine green. Then, as it straightens, you catch sight of many islands scattered around the innumerable bays of the Gulf of Fethiye, and you imagine yourself sailing before the wind amongst them. As you leave the plane, the salt smell in the air and the cool touch of the breeze tells of the presence of the sea close by. Filled with the expectation you drive the 20 kilometers from Dalaman Airport to Gocek, the shadows cast by the pine woods alternating with brief glimpses of this cute little town in the distance. If instead of entering the village, you continue on to Inlice, where the fragrance of the oriental sweet- gum trees (Liquidambar orientals) pervades the air, you pass by a Lycian rock tomb at the edge of the road. There are many such tombs to be seen on the hillsides around Gocek, and while out exploring this region on the borders of Lycia and Caria, to know that you are treading the very same ground traveled by Strabo and Pliny in antiquity enhances the pleasure of such walk. 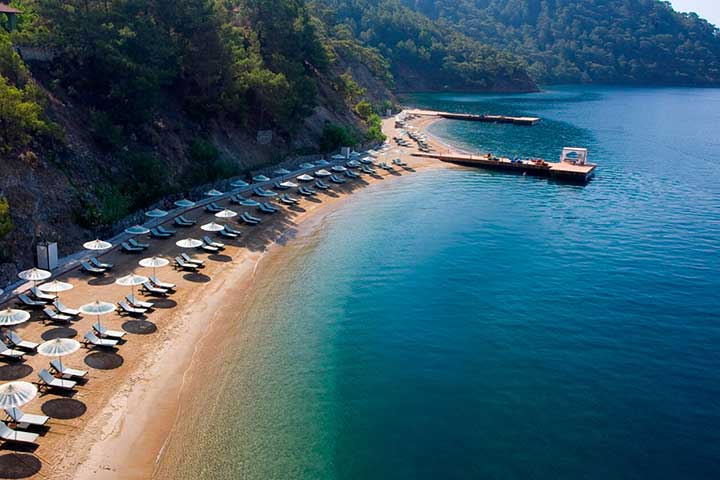 The region was also home to Icarus, who flew too near the sun on the wings invented by his father Daedalus and fell to his death. It is only one of many resorts on this beautiful stretch of coastline but stands out as the starting point for the most remarkable yachting route in the Mediterranean, and for the scope of services available here for seamen and their weary boats. On the shore here you will encounter passionate aficionados of the sea, enchanted by the beauty of their voyage, yachtsmen busy overhauling and provisioning their boats, dry docks, and marinas where the boats wait impatiently to be out to sea again. In the streets, restaurants, and bars you come across voyagers of every nationality. The village relationship with sailors goes back thousands of years, to when the Lycian coastal town of Kalimche stood here. Today, Gocek is a meeting place for yachts and passengers setting out and returning from the famous Blue Voyages around this spectacular indented coast. The Blue Voyage was ‘invented’ by a group of Turkish artists and writers in the 1960s, and it is the center of the leg between Marmaris and Fethiye. In 1988 this stretch of coast was declared a conservation area, so the beautiful shores and bays remain completely unspoiled. The boats in the harbor offer a wide range of possibilities to suit every inclination and budget. Whether you join a day trip or hire a yacht, you are sure to enjoy a magical sense of discovery. The Twelve Islands Tour will take you to Tersane Island, the Yassica Islands, Cleopatra’s Bath and Beach, and numerous coves and bays, such as Camli, Bedri Rahmi, Tasyaka, Boynuz Buku, Ak Buk, and Sirali Buk. Perhaps most of all you will enjoy the nameless deserted coves, thickly wooded with the oriental sweet-gums native to Turkey and found nowhere else. And do not forget the loggerhead turtles who are as fond of these quiet spots as you and look at human intruders with timid eyes as they glide through the water. When, from the bow, you see a lively fish painted on a rock looking at you with large eyes, you know you have arrived in Bedri Rahmi Bay. 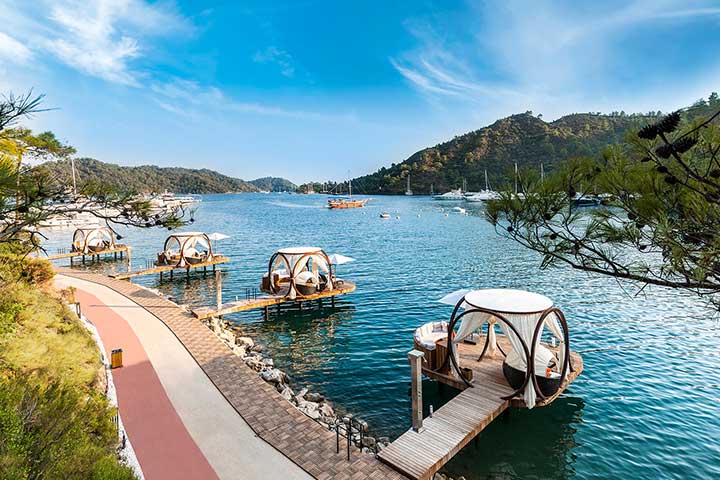 Artist and poet Bedri Rahmi Eyuboglu painted his fish in 1974, and the cove was named after him. There are Lycian rock tombs on the hillside overlooking the cove, whose shores are thick with oleanders. Beyond this is Tasyaka and then Cleopatra. The half-submerged ruins in Cleopatra’s Cove are not, in fact, contemporary with the Egyptian queen, but a mixture of Carian and Byzantine. Tersane Island also has extensive ruins, mainly belonging to an old Greek village. The island is the largest of the group known as the Twelve Islands and takes its name from the fact that it served as a naval arsenal for the Ottoman Navy during World War I. Here you can sit beneath a goat’s hair canopy and eat a lunch of gozleme, a specialty of the nomadic Yoruk cuisine, consisting of thinly rolled pastry folded into envelopes containing cheese and other various fillings, and cooked on a griddle, accompanied by a refreshing drink of ayran made with yogurt. For dinner, of course, a feast of Mediterranean seafood awaits you.

The larger of the two Yassica Islands is little more than a narrow sandbank and resembles a playground with a shallow pool at one end that is perfect for young children. It is possible to walk through the sea to the smaller island. There are rides on bananas and rings for those in search of more exuberant entertainment. The coves and bays of the Gulf of Gocek, protected from the strong winds of the open sea beyond, are an ideal way to enjoy the sea at its most idyllic. Accommodation ranges from small charming guesthouses to starred hotels, and the relaxed atmosphere of the village combined with the busy liveliness of the sophisticated marinas is sure to delight everyone.