If any aroma were especially associated with the East it would be that of coffee. In coffee a journey westwards over the centuries it has taken many different forms and acquired a unique symbolic role in the etiquette of hospitality. Coffee culture has thus become an inextricable part of social life.

The Name Origin of Mirra

Bitter coffee (known as Mirra), a word deriving from the Arabic “mur” meaning bitter, is a specialty of the southeastern region of Turkey, above all of Urfa. Here Mirra is an important part of daily life, and at every step, you come across street vendors carrying samovars of coffee. If you think of coffee as an ordinary beverage to be quietly sipped in a corner, then you must rethink your ideas when it comes to this coffee. It is a ceremonial drink served at formal social gatherings, at weddings, circumcision celebrations, on religious feast days, and in the homes of the bereaved when offering condolences. Wealthy households in the past employed a coffee maker whose sole job was to roast, grind and make coffee for the family and their guests.

Even today there are an estimated twenty or possibly thirty master coffee makers in Urfa who are employed on special occasions, and whose trade is often passed down from father to son.

Any type of good quality coffee may be used to make it, but at least three people are required: one to stir the water, one to slowly pour the ground coffee into the pot, and the other to recite ballads. First, however, the beans are roasted in a large coffee pan over low heat while being constantly stirred with a special long-handled spoon. The master coffee maker can tell when the coffee is perfectly roasted by the color. Then it is pounded in a large mortar made of hardwood until the grains are slightly larger than that used for ordinary Turkish Coffee, which is more powdery in texture. Although coffee mills are often used today for convenience, coffee pounded in a mortar is still reckoned the best. 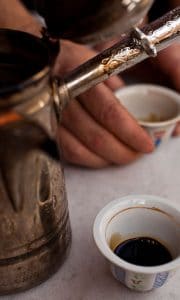 Having been slowly added to the water, the coffee is brought to the boil several times, so that a froth forms and the coffee becomes thick, and it is in this process that expertise counts. This is then mixed with fresh water and some poured into a specially decorated metal pot to half fill it. Two or three kilos more coffee is added, and the pot brought to the boil, placing it in the heat and taking it away alternately so that it does not boil over. When ready it is left to get cold so that the coffee grounds fall to the bottom of the pot, and the coffee poured off into a second pot known as a mutbak. More of the initial coffee and water mixture is added at this stage, and then the coffee is boiled again and poured off into another pot, leaving the remaining grounds behind. It is then boiled again, left to get cold, and poured into special jugs with lids. By now, the coffee has the consistency of molasses and is so dark that it will stain a coffee cup. In the past, this process of boiling and pouring into another jug or pot was repeated seven times, and a charcoal fire was used. Sometimes cardamom is added as a flavoring.

When required the coffee is heated up, either in a long-handled copper coffee pot known as a cezve or in a copper jug, and poured into cups. Even the pouring has its own ceremonial. The coffee maker holds the cup in one hand and the pot in the other. Around his neck or in his pocket are cloths for wiping the cups. He serves the people present in order of age, from oldest to youngest, and each person is served twice. Only a small amount is poured into each cup at a time. It should not be allowed to get cold, as the flavor is lost, but nor should it be drunk so hot that it scalds the mouth. One should first tip the cup on his mouth and let the coffee lightly touch the palate, and then drink it slowly in two or three sips, swiveling the cup 45 degrees each time.

No sugar is added to it, which is so strong that it is regarded as a failsafe cure for drunkenness and is known colloquially as ‘sarhos ayiltan’ (‘that which brings a drunk to his senses’). Strict rules of protocol apply to Mirra in Urfa.

If someone from a family that has never served it before becomes prosperous and decides to serve it, he must first invite the dignitaries of the area to his house for a banquet to celebrate the granting of permission.

The cups are of a special type, and no one would dream of drinking it from anything else. These are tiny cups in the form of inverted truncated cones, without handles. Good manners require that the person who is served should look into the face of the person who serves the coffee, and when finished should hand the cup back. To place the cup down is regarded as impolite, and the forfeit is either to fill the cup with gold or to promise to arrange the marriage of the young man who offered the cup! How this custom originated is unknown, but the following story is related to the subject. One day a rich guest in the house of a landowner decided to tip the coffee maker but sought to do it in such a way that his host would not take it as a slur on his hospitality.

After drinking his Mirra, he placed the cup on the floor instead of handing it back to the coffee maker, who bent down to pick up the cup. The guest apologized for not handing it back and as an expression of his regret-filled the cup with gold coins.

Thereafter, if anyone placed their cup on the floor, the coffee maker demanded that they fill the cup with gold or arrange their marriage. So if you are in Urfa and are invited to drink Mirra, remember there is a high price to pay for forgetting local manners!