Apart from other antique cities on the Mediterranean Coast of Turkey, Perge in Antalya is not establishing on the water side but approximately 10 km far from the sea. This unique location is due to the Aksu River which flows through the city. It is reported that the ships were able to reach the Mediterranean Sea and get back to it in spite of the debt of Aksu River. The famous Mathematician Apollonius was also a resident of the city. According to the recent excavations executed by Wolfram Martini, the plateau of Acropolis has been inhabited since 4th millennium BC.

Today, while it is not very well known like similar ancient settlements; there is still a lot to see and it is not far from the resort or hotel you will be staying at.

During excavations at Perge, inscriptions and statues were found of Plancia Magna who added to the beautification of the city by her patronage in the first half of the 2nd century AD. Three statues and numerous inscriptions have been discovered, and her tomb has been found just outside the 4th century later city gate. 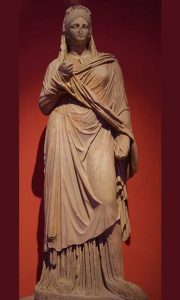 Inscriptions have also been found which give information about the family of her. The inscribed bases of statues of M. Plancius Varus and his son G. Plancius Varus were found in the Hellenistic courtyard of the entrance to the city.

From the inscriptions, it is understood that they were wealthy and influential citizens who held the title ktistes (founder) and had also made benefactions which contributed to the prosperity of Perge.

The inscriptions refer to father and son as father and brother of her. The benefactions she made for the city included restoration of the Hellenistic entrance of the city by embellishing the courtyard with marble facing, decorative architectural elements and statuary.

She also provided a two-tiered triumphal arch which had three entrances and was decorated with statues.

She was honored by the boule, demos and gerousia of Perge as demiourgos, which is a title denoting the annual eponymous magistrate, a high office reserved for men.

She also held the titles of high-priestess of Pergaean Artemis and high-priestess of the Imperial Cult. The statues of this example of one of the most influential, successful and highly respected women of Anatolia are exhibited in the Antalya Museum which is a must while in the area.