Unless you’re a well-versed traveler of the world, you may not be familiar with the Hotel Antakya in Turkey. The building was completed this year, and it includes beautiful pre-fabricated rooms, a restaurant, a lounge, and all the amenities of a five-star hotel in the modern world. But the hotel’s most astounding feature lies on its first floor, in the foundations of the building. 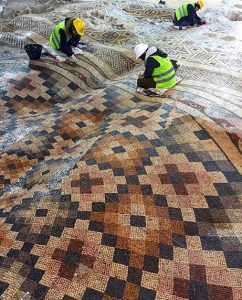 The Hotel Antakya is home to the world’s largest mosaic, uncovered in 2010. And while its size alone would make the piece an impressive archaeological find, its history and the history of the civilizations that created it are breathtaking. Read on to learn more about this amazing discovery and how it came to be.

A construction crew in Antakya, Turkey, made an astonishing discovery while digging the foundation for a new hotel in 2010. They uncovered a mosaic dating back about 2,000 years. Construction on the hotel was put on hold while a six-month excavation took place.

What archaeologists discovered was beyond anything anyone could have expected. Hiding beneath the foundation of the future hotel was the world’s largest (and perhaps longest construction time) mosaic.

The rug contains work from thirteen different civilizations spanning from the Hellenistic period to the Islamic period.

Size of the Piece

The Antakya Hotel mosaic spans a stunning area. All told, the piece covers around 9,000 square feet. For scale, this is about triple the size of an average house in America today.

Archaeologists believe the mosaic may once have been part of a government building dating back to the sixth century. But the artifacts found inside date back to the Hellenistic Age, which began in 323 BC. In addition to the mosaic, archaeologists uncovered ruins of buildings, coins, statuettes of Eros, and more. 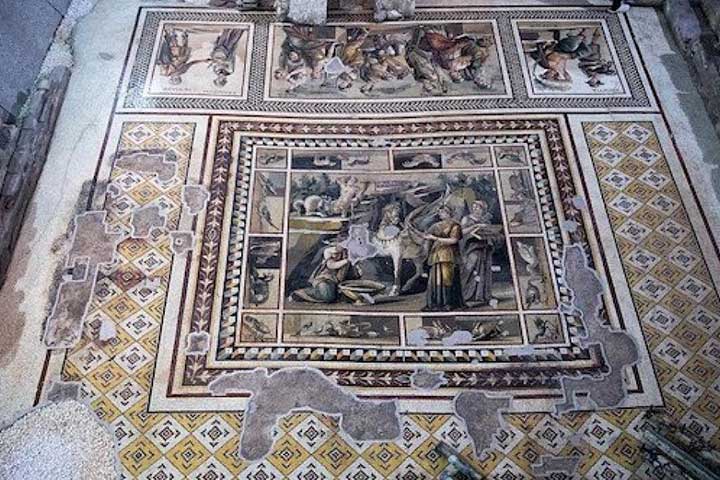 Aside from the sheer size of the piece, one of the most remarkable things about the Antakya mosaic is how long it was in progress. Thirteen different civilizations are believed to have contributed to the mosaic. This began around the time the Greeks were ruling Antioch, about 300 years before the birth of Christ.

Contributions to this mosaic came from cultures as diverse as the Greeks, the Romans, the Byzantines, the Arabs, the Crusaders, and the Egyptians. The piece was in progress for more than fifteen centuries, from around 300 BC until the 1200s AD.

It may seem strange that such a wondrous mosaic could be found in a town as relatively unknown as Antakya. After all, we expect these things from cities like Rome, Athens, and Jerusalem. But during its fifteen-century ancient history, Antakya was one of the most influential cities in the Near East. 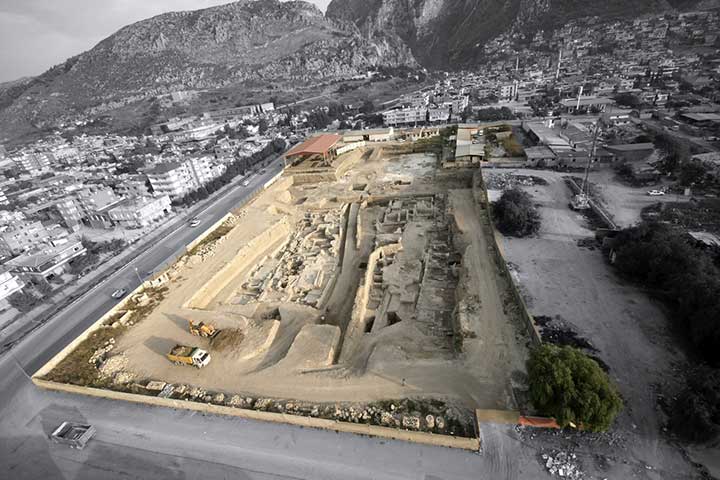 History of the Area

Although you may not realize it, you’ve probably heard of Antakya before. What is now Antakya was once the ancient city of Antioch, the city where Christianity got its start. In fact, at one time, Antioch rivaled Alexandria as the most important city in the Near East.

Antioch was founded around the same time the Antakya mosaic was begun: 300 BC, give or take. It joined the Roman Republic around 64 BC and remained a part of the empire until 387 AD. For the next seven centuries, it passed among Constantinople, the Byzantine Empire, and Arabic rule.

In 1098, the Crusaders recaptured Antioch, and it passed hands dozens of times over the next two hundred years. The city of Antioch fell in 1268. After defeating Damascus, Nazareth, and the Kingdom of Jerusalem, an Egyptian sultan laid siege to Antioch and killed almost everyone in the city.

The Ottoman Turks took over Antioch, which had dwindled to a population of about 300, in 1517. It remained a part of the Ottoman Empire until World War I when it was transferred to Syria. In 1939, Antakya became a part of Turkey, where it remains to this day. 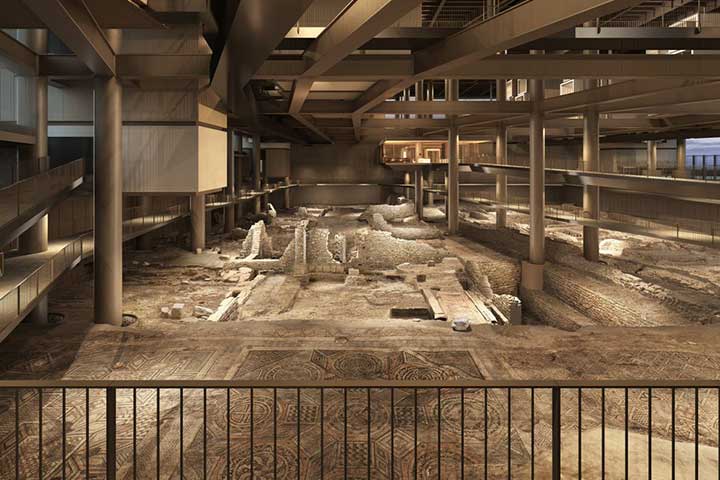 When the Antakya mosaic was uncovered, hotel architects had a tricky matter on their hands. They could find a new site for the hotel and sidestep having to deal with all the historic preservation requirements. But often, if there is no one to fund excavation projects, they get covered back up and forgotten about, that piece of history lost.

Going forward with building the hotel on that site meant all manner of historical red tape, but the owners decided it was worth preserving the history. They spent ten years excavating the mosaic and the ruins and building the hotel. It wasn’t until this year that the construction was completed and the hotel opened for business.

The Antakya hotel features a bottom floor that doubles as a museum. Visitors can see the carefully preserved mosaics and wall fragments below them. A raised glass floor shows off the history of the site, while pre-fabricated hotel rooms provide all the modern luxuries in the floors above. 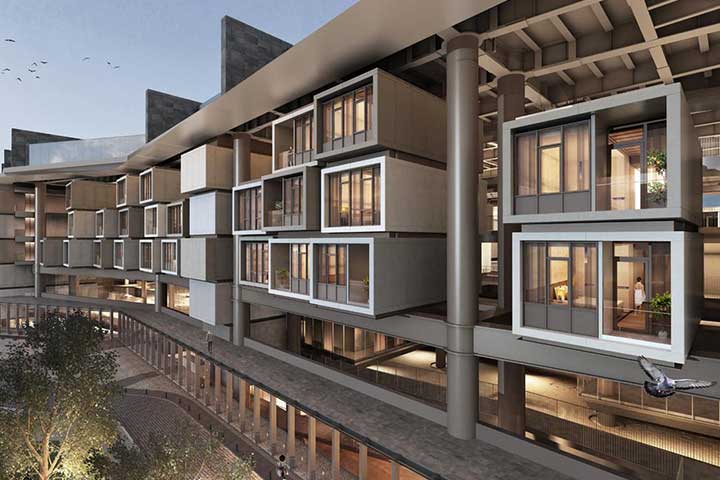 You can visit the mosaic now at the Hotel Antakya in Turkey. The blend of ancient history and modern technology is astounding and is well worth the visit. Walk over the vast mosaic floors and imagine the fifteen centuries of work that went into it, the wars that were fought over it, the annihilation it survived, and the rebirth it has now found in the Hotel Antakya.

If you’d like to learn about more incredible places to visit, check out the rest of our site at Travel Atelier. We can help you get set up with private tours, luxury hotels, private yachts, and all the best in travel. Check out our list of destination recommendations today.