As the Turkish Republic was founded on the heritage of the Ottoman Empire, many things from that time such as the Turkish Flag continued with slight changes. The Ottomans used various flags of different colors at different times. In the 14th century, it was white, in the 15th century, it was changed to red. Once it was 3 white crescents with a green background. Each of the Crescents symbolized a continent on which the Ottomans used to rule. As the Ottomans were associated with Islam, crescents might also have symbolized the sovereignty of Islam on those 3 continents. From then on, the crescent has been known as the symbol of Islam.

Later in the 18th century, only one crescent together with an 8-pointed star on the red background was used. The combination of the crescent and the red color came about, according to legend when one of the Turkish commanders while wandering around a battlefield, noticed the reflection of a star on the blood collected on the ground. That image so impressed the commander that he chose those symbols for the flag. Today, the red color is accepted as the symbol of blood.

A heroic poem about the color says; “What makes a flag is the blood and tears, and what converts land into a Nation is its Martyrs!”

After the foundation of the Turkish Republic, the Turkish flag was chosen to be a combination of a crescent and a 5-pointed star on a red background.

The Fundamentals of the Turkish Flag

The fundamentals of the Turkish flag were laid down by the laws: Old, dirty or torn flags cannot be used. People cannot sit or step on them. In schools or official places, it is hoisted at the weekends and holidays. On Monday mornings, the new week starts with students saluting the national flag in schools.

All over the nation, there are only two places in which the flag is kept permanently raised; the first is the Parliament building because here it symbolizes the continuity of the nation’s existence, the second is at the Mausoleum of Ataturk, the father of Turks. Only on the day of his death, 10 November, is the flag hung at half-mast as a sign of sorrow. 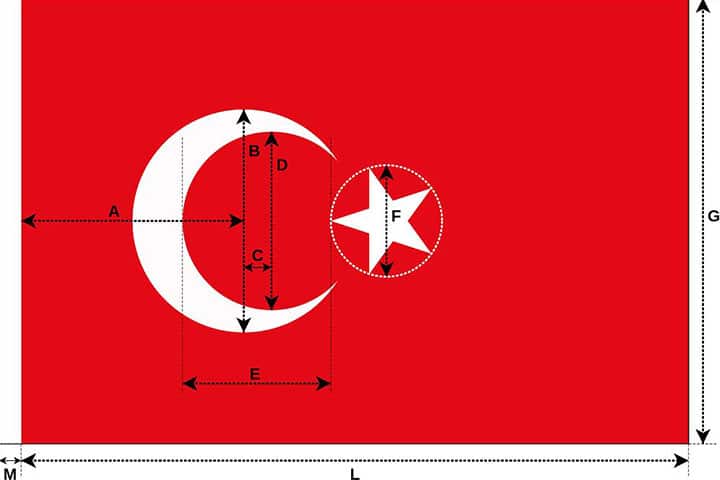 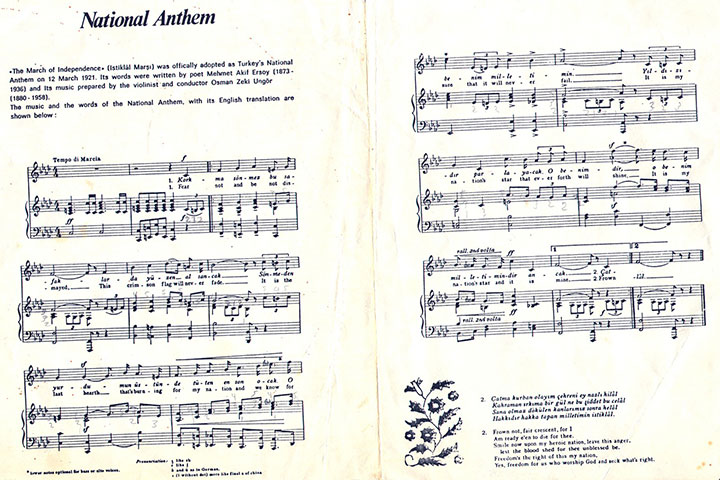 In a competition which was held in 1921, The March of Independence (Istiklal Marsi) was written by Mehmet Akif Ersoy was selected from among 724 poems. 24 composers participated in another competition arranged for the selection of a musical composition for the National Anthem. The winner was the Ali Rifat Cagatay in 1924 and his music was sung for 8 years. Thereafter, the music of the National Anthem was changed to an arrangement written by Zeki Ungor.

Listen to The Turkish National Anthem with English Subtitle