In ancient Turkey, the Iron Age corresponded to the first millennium BC. At that time western Anatolia was inhabited by three civilizations, Lydia, Caria, and Lycia. Caria encompassed all of today’s province of Mugla and part of Denizli and Aydin, extending westwards as far as the Menderes (Meander) river and eastwards to the Dalaman river, and with a littoral on the Aegean. Carians were proficient seamen and farmers, and the economies of their inland cities were based on olive cultivation. Their twenty cities, which had sophisticated plans, were each of equal importance. They included Bargylia, Halicarnassus, Euromos, Stratonikeia, Lagina, Gerga, Thiangela, Alinda, Alabanda, Aphrodisias, Hierapolis and Laodicea.

In the 6th century BC, the Persians invaded Anatolia and the Aegean islands, appointing governors to each region. In 499 the Ionian cities, backed by the Carians, rebelled against Persian rule but were defeated by the Persian army led by Darius. The Carians suffered huge losses and took refuge in the sacred precinct of Labraunda, where they reformed their army and attacked the Persians again, but were defeated. All of Caria now fell into the hands of the Persians, who appointed two brothers, Mausolos and Idreius as satraps. They adopted the local gods in place of Persian deities and built many fine buildings around the temple to Zeus Stradios in Labraunda. 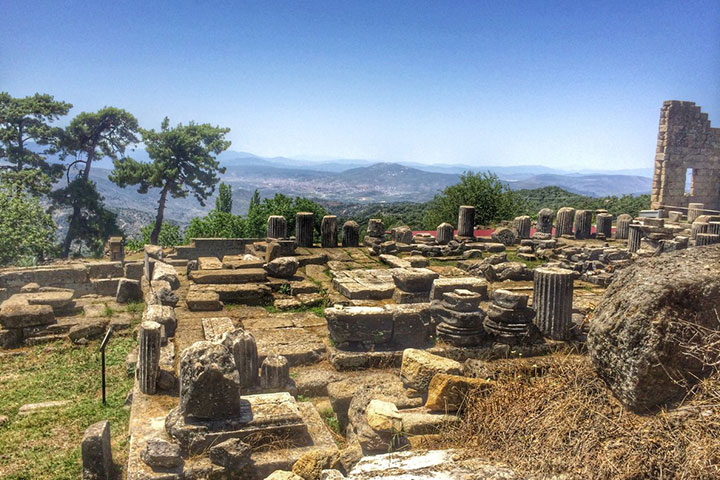 The sanctuary of Labraunda lay in the mountains around Milas Plain, and festivals were organized here several times a year. A paved sacred way led here from Mylasa (Milas), winding through meadows carpeted with daisies in spring, and through groves of olives, figs, pomegranates, pines and plane trees. Along this 13 kilometers long road, the processions from Mylasa had made their way to the sacred precinct of Labraunda since very ancient times. The long paving stones were laid diagonally on the 7.62 meters wide road, distinguishing it from those of Roman construction. At intervals were small shelters where pottery jars were kept filled with cold spring water for thirsty travelers, and some of these shelters are still standing today. 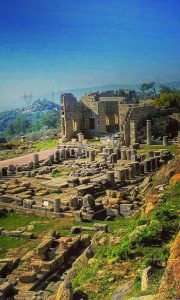 It is built on terraces carved into the steep hillside. As well as the great temple, there are gates, flights of steps and houses to accommodate those participating in the splendid festivals dedicated to Zeus. Stairs which shone gold in the sun led up to the temple, and thousands of people from Mylasa and other more distant cities would wait in line for their turn to enter the temple and make their sacrificial offerings of goats and cattle. Jars of wine, olives, baskets of fruit and grain would be carried up here on the backs of animals. The young temple priestesses would chant prayers, and the nobility would attend feasts for men only in the androns or ceremonial rooms, while the ordinary people ate food cooked in kitchens set up in the squares. The highlight of the festival was receiving messages from Zeus from the oracular eels, which were adorned with necklaces and earrings and kept in a pool at Labraynda. Questions about the future were asked to the eels, and if they ate food held out to them the answer was considered to be favorable. The priests of the temple also served as soothsayers, being appointed for life in earlier centuries and later only for terms of one year.

Being buried near Labraynda was very important for the Carians. At the festivals, the dead would be commemorated, and their relatives and friends held small ceremonies in their honor.

It is thought that various sports events were also held at Labraynda, and this has been substantiated by the discovery of a large stadium by Swedish archaeologists excavating the site. At festival time, Labraynda was tranquil by day, but at night lit up by torches which burnt until daybreak. From its position high in the mountains overlooking the fertile plain below, it was sacral ruler over Caria.