The human activity of graphically translating one’s perception of his world is now generally recognized as a universally acquired skill and one that pre-dates virtually all other forms of written communication. Set in this pre-literate context and subjected to the ravages of time, the identification of any artifact as “the oldest map”, in any definitive sense, becomes an elusive task. Nevertheless, searching for the earliest forms of cartography is a continuing effort of considerable interest and fascination. These discoveries provide not only chronological benchmarks and information about geographical features and perceptions thereof, but they also verify the ubiquitous nature of mapping, help to elucidate cultural differences and influences, provide valuable data for tracing the conceptual evolution in graphic presentations, and enable examination of relationships to more “contemporary primitive” mapping.

As such, several well-known early examples appear in most standard accounts of the history of cartography. The most familiar artifacts presented as “the oldest extant cartographic efforts” are the Babylonian maps engraved on clay tablets. These maps vary in scale, ranging from small-scale world conceptions to regional, local and large-scale depictions, down to building and grounds plans. In detailed accounts of these cartographic artifacts, there are conflicting estimates concerning their antiquity, content, and significance. Dates quoted by “authorities” may vary by as much as 1500 years and the interpretation of specific symbols, colors, geographic locations and names of these artifacts often differ in interpretation from scholar to scholar. 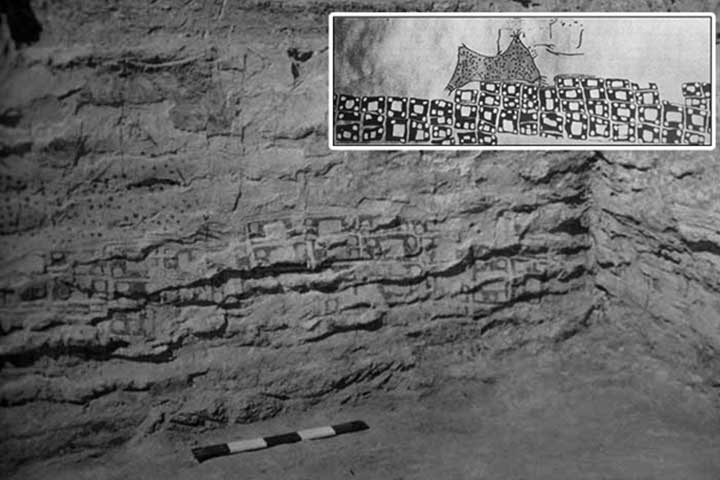 One such Babylonian clay tablet that has been generally accepted as “the earliest known map” is the artifact unearthed in 1930 at the excavated ruined city of Ga-Sur at Nuzi (Yorghan Tepe), near the towns of Harran and Kirkuk, 200 miles north of the site of Babylon (present-day Iraq). Small enough to fit in the palm of your hand (7.6 x 6.8 cm) most authorities place the date of this map-tablet from the dynasty of Sargon of Akkad (2300 – 2500 BC); although, again, there is the conflicting date offered by the distinguished Leo Bagrow of the Agade Period (3800 BC). The surface of the tablet is inscribed with a map of a district bounded by two ranges of hills and bisected by a water-course. This particular tablet is drawn with cuneiform characters and stylized symbols impressed or scratched, on the clay. Inscriptions identify some features and places. In the center, the area of a plot of land is specified as 354 iku (about 12 hectares), and its owner is named Azala. None of the names of other places can be understood except the one in the bottom left comer. This is Mashkan-dur-ibla, a place mentioned in the texts from Nuzi as Durubla. By the name, the map is identified as of a region near present-day Yorghan Tepe (Ga-Sur at the time, the name Nuzia 1,000 years later), although the exact location is still unknown. Whether the map shows a stream running down a valley to join another, or running from that to divide into three, and whether they are rivers or canals, cannot be determined. The shaded area at the left side, to or from which the channels run, was named, but the writing is illegible. Groups of overlapping semicircles mark ranges of hills, a convention used by artists then and in later times. The geographic content consists of the area of a river valley which may be that of the Euphrates flowing through a three-lobed delta and into a lake or sea in the northern part of Mesopotamia. Also shown on this tablet may be the tributary river the Wadi-Harran, the Zagros Mountains in the east, the Lebanon, or Anti-Lebanon in the west, and cities that are symbolized by circles. North, East, and West are indicated by inscribed circles, implying that maps were aligned in the cardinal directions then as they are now. This tablet also illustrates the sexagesimal system of mathematical cartography developed by the Babylonians and represents the earliest known example of a topographic map. 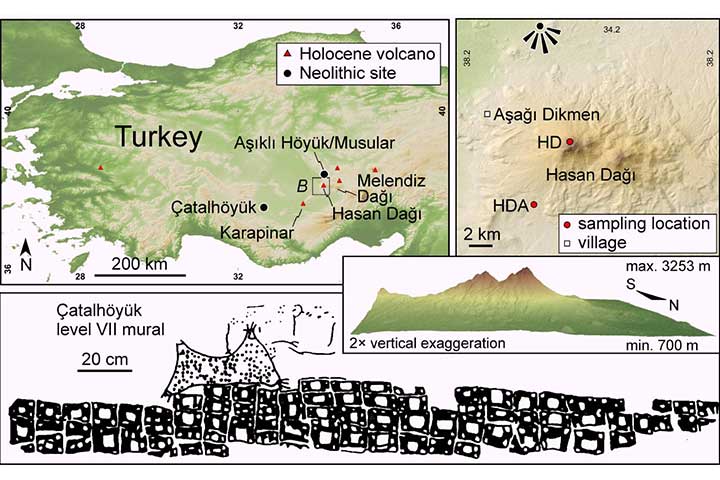 However, while the Babylonian clay tablet map described here has been the generally accepted “earliest known map”, another contender might be the cartographic artifact found in 1963 by James Mellaart in Ankara, Turkey during an excavation of Catalhoyuk in Anatolia. While less distinctive and on a much larger scale, this unearthed map-form is a wall painting that is approximately nine feet long and has an in situ radiocarbon date of 6200 + 97 BC. Mellaart believes that the map depicts a town plan, matching Catalhoyuk itself, showing the congested “beehive” design of the settlement and displaying a total of some 80 buildings. One illustration of this map shows the painting from the north and east walls of the shrine. In the foreground is a town arising in graded terraces closely packed with rectangular houses. Behind the town an erupting volcano is illustrated, its sides covered with incandescent volcanic bombs rolling down the slopes of the mountain. Others are thrown from the erupting cone above which hovers a cloud of smoke and ashes. The twin cones of the volcano suggest that an eruption of Hasan Dag, rising to a height of 10.672 feet, and standing at the eastern end of the Konya Plain and visible from Catalhoyuk, is recorded here. These local volcanic mountains were important to the inhabitants of Catalhoyuk as a source of obsidian used in the making of tools, weapons, jewelry, mirrors, and other objects. Further, from graphic embellishments around the mountain, Mellaart has speculated that the depiction of the volcano in an active state is accurate since volcanism in this area continued for some 4000 years later.

The Catalhoyuk “map” is still not the beginning of cartographic history. The investigation into the earliest beginnings of cartography will continue with a fair probability of further success. This optimism is warranted by the fact the materials used during these periods to record such geographical spatial concepts were more durable elements such as stone, clay, metal, earthenware, etc., unlike later cartographic artifacts made of more fragile materials such as paper and wood.