An expanse of pale blue is the first impression as Lake Beysehir comes into sight. Then when you wander along the shore, especially on a sunny day, you find that it resembles watered silk, shimmering in every shade of blue. This effect is due to the limestone bed of the lake and differences in depth. In the clear dry air of central Anatolia, the sunlight reflects off the limestone, which over much of the lake is no more than 15 meters beneath the surface. Only on the western side, it reaches depths of up to 70 meters, and here the spectrum of blue tones is at its most magical. Being in Turkey’s Lake District, it lies at an altitude of 1121 meters and is a tectonic subsidence lake. With an area of 656 kilometers and a circumference of 45 kilometers, it is Turkey’s third largest one after Lake Van and the Salt Lake, and the country’s largest freshwater. This region is characterized by lakes formed in depressions where the earth’s crust has sunk, and by ranges of mountains rising up from their shores. The Dedegol mountain range runs all along the western shore of the lake. The highest peak in these mountains, which are part of the Western Taurus is Dippoyraz at 2992 meters. The juniper and black pine forests here are home to a wide diversity of wildlife.

The forested mountain backdrop and extraordinary pale blue waters of the lake create a scene of picture-postcard beauty, particularly at the eastern end of the lake. In 1993 the area was declared a national park, both on account of its beauty and to preserve the rich flora and fauna. Beysehir National Park is Turkey’s largest, with an area of 88,750 hectares. Commencing your tour of the lake from the northwestern extremity within the national park, you can walk southwards along the road which is bounded by the lake on one side and the Dedegol Mountains on the other. As you stroll through juniper trees listening to the calls of singing birds, you will be struck by the number of islands dotting the water of the lake. There are 22 altogether, and from the villages of Gedikli and Golyaka, you can hire a rowing boat for a delightful voyage of exploration from one island to the other. 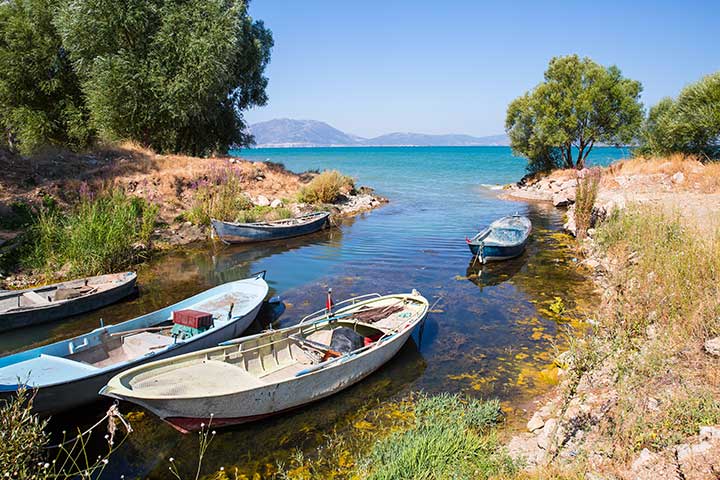 Just before Golyaka, you come across the ruins of Kubadabad Palace, built by the Turkish Seljuk Sultan Alaeddin Keykubad in 1236. The stucco and tiling decoration of the palace is remarkable. The next stop is Yenisarbademli, a town located at the only spot where the mountains are passable. If you head into the mountains from here on the Aksu road to the village of Yakakoy, you will be treated to a stunning panoramic view over the lake the same road, at Karacahisar 11 kilometers from Yenisarbademli, is the entrance to Pinargozu Cave, set in a forest of black pine. At 6 kilometers, this is one of Turkey’s longest cave systems, and an underground stream emerges at the mouth. Since this is a karst limestone region, there are many caves in the vicinity, most celebrated being Korukini and Suluini near the village of Camlik and the Balatini Caves near the town of Derebucak, in the mountains south of the lake.

This region has been settled since Neolithic times, and the area south-east of the lake around the city has numerous archaeological remains, including the carved Hittite monuments of Fasillar and Eflatunpinar. The Eflatunpinar Monument located at a spring 22 kilometers north of it is a relief carving depicting men, women, and animals resembling lions dating from the 13th century BC. The Fasillar Monument is a 7.5-meter high granite block off the Konya road about 17 kilometers from Beysehir. The uncompleted carving depicts a male figure, thought to be a god, dressed in long robes with his hands across his chest, standing between two lions. The Hittites were succeeded by the Phrygians, Lydians, Persians, Macedonians, Romans, and the area was an important center of Anatolian Seljuk culture in medieval times. Following the collapse of the Seljuks, it became the capital of the Turkish Esrefogullari Principality, declining in importance in Ottoman times. 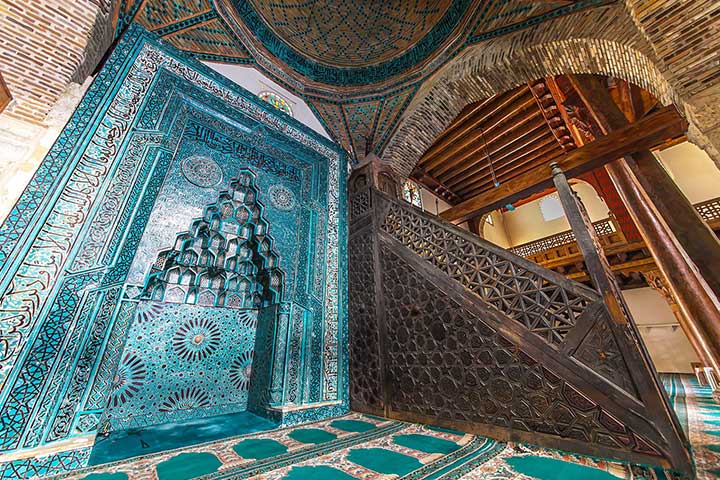 The most important historic buildings in the area date from the Esrefogullari period and include Esrefoglu Mosque thought to date from the 13th century. This is Turkey’s largest columned mosque with a flat ceiling and wooden roof, and the stone and wood carving, tiling and mosaic, are exquisite examples of Seljuk-style decoration. Also not to be missed in the city are the Esrefoglu Kumbet Mausoleum, Ismail Aka Medrese, Kurucesme Han, and the Bedesten bazaar. Other places of interest in the area are the Neolithic settlement mound of Erbaba Hoyuk, the Seljuk period Kiziloren Han and Kandemir Mescid and the castle known as Kiz Kalesi which stands on one of the islands off the western shore of the lake. The area is beautiful in different ways at all times of the year, but the best season for exploring the countryside is from the middle of April to the end of May when nature is in its full spring glory and the mountains are still snow-capped. And finally, while you are in Beysehir do not forget to taste the delicious fish caught in the lake.