Catalhoyuk is in the borders of Cumra District of Konya and is located 10 km east of the district. The tumulus is in the form of a hill having two hill plains of different heights. It has taken the adjective fork because of these two heights. It has been found by J. Mellaart in 1958 and its excavation has been performed in the years 1961 - 1963 and 1965. As a result of the researches made on the western slope of the high hill, 13 structure layers have been found. The earliest residence layer is dated to 5500 BC. This dating, performed with style critics method, has been verified by the C14 method. With its finds special the first residence, first house architecture and first holy structures, it is a center holding a light to human history.

The Idea of Statelessness

The transformation from mere foragers of the Paleolithic Age to adopting a sedentary life of Neolithic Age represents one of the most important stages that humanity has taken throughout the centuries. This transformation has brought many fundamental revolutions for the life of human beings at the date and had many reflections on the social structure of the societies. One of the most important outcomes, however, was the emergence of social classes based on the accumulation of wealth and the trade of it. Catalhoyuk and Jericho are the most two ancient settlements being massively populated around 7500 BC which let the archeologist call them as very first “cities” we know up to date.

Dated back up to 7500 BC situated in the middle of Anatolia, Turkey, Catalhoyuk demonstrates an array of interesting findings which diverge with the above presumptions. In this sense, Catalhoyuk’s most interesting aspect is the fact that although it is clear that the society had embraced a settled life; we don’t observe any building that might have belonged to a higher or privileged class among the society. It has almost 1000 houses which are estimated to have housed between 5000 to 8000 people simultaneously. However, all the buildings are the same regarding the size and the facilities and no proof telling a class differentiation is unearthed up to date. In this sense, it is considered as one of the most ancient examples of a type of self-governance without being in need of a government. The idea of “Statelessness” seems to have a longer history than we would usually assume.

The best known period of the residence, that is urbanization in Catalhoyuk is the 7th and 11th layers. The walls of quadruple walled houses are next to each other. There are no common walls. Each house has its own individual wall. The houses are separately planned and another house is built near the existing house in case of a need. Due to the neighboring walls of the houses, there are no streets in the city. Transportation is provided through plain roofs. No findings having the characteristics of city walls protecting and bordering the city could be found. The material used in the construction is sun-dried brick, trees, and reeds. The base depths of the houses are small. There are wooden columns between the walls. The beams on these columns bear the flat ceiling. The upper cover of the ceiling is clay soil pressed on the reed. The houses are single - floored and entrance is provided via a ladder from a hole opened on the roof. Each house consists of a room and a warehouse. There are quadruple owens in the rooms, steps having heights varying between 10 - 30 cm from the floor base and quadruple niches in the walls. The walls are plastered. After painting the plaster in white, paintings in yellow, red and black tons are made. Holy rooms are bigger than other rooms. The trophies of the original bullhead, ram head and deer heads conserved with pressed clay are appliqued on the walls. Besides these, human and animal figures in relief form are also seen. Wall paintings are found in the 10th layer as the earliest and in the 11th layer as the latest. The most beautiful and developed ones belong to the 7th and 5th layers. These paintings are the continuation of the paintings made by the Paleolithic man on cave walls. They are paintings made for the abundance of the hunt. Towards the late period, it is seen that house scenes become less and bird motifs and geometric patterns occur.

It is thought that the human figures without head painted on the walls as being eaten by vultures are related to the traditions of burying the dead. The bones cleaned from the flesh being eaten by the vultures are collected and wrapped in a coating made of a mat and buried under the figures in the house. In the researches made under the figures, many skeletons have been found. As the gifts for the dead, tools made of bones, colored stones, cutter tools, stone axes, beads made of seashells are put. The small sculptures obtained in the excavation provide us with information about the beginning of the mother goddess culture (worship) and the beliefs of that period. These small sculptures made of cooked soil and stone have sizes varying between 5 - 15 cm. they are depicted as fat women with big breasts and big hips and sometimes as giving birth. This is because of their representing abundance and blessing. Almost all of the tools and materials obtained in the area are stone, cooked earth, axes, shallow plates, high relief abundance goddess motifs, and the bracelets and necklaces. Black and tile red-colored pots and cups having a rough - granule dough made of the cooked earth have been found. Furthermore, the mother goddess and holy animal figures are made of cooked earth. The cutter and perforator tools made of bone and spear and arrow end made of obsidian are the most important materials used in Catalhoyuk.

Another important aspect of the site is the fact that the cults of Toro and Father God which we frequently encounter during ancient times has probably originated from this ancient site. The story reads as; a big eruption occurs in Hasan Mountain which is situated in front of Catalhoyuk and an extraordinary scene had emerged in front of the eyes of its residents. The particles breaking off from the top of the mountain just exploded up to 20km reaching even the level of the stratosphere. As a result of this massive explosion, even the climate had been affected and heavy rain just started accompanied by a heavy storm and lightning. As a consequence of this massive explosion, even the sky went dark. The residents gazed in awe at these incredible events and concluded that the mountain must be a God. 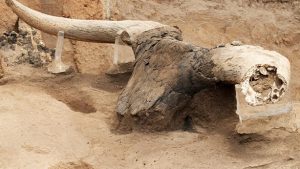 However, compared with their mother God (earth), this new God wasn’t that fertile. Therefore they called him Father God. Following this extraordinary explosion, the top of the mountain had taken the shape of two horns and a flow of lava in between these horns, appearing as a tongue, was alluding to the “Aurochs”. “Aurochs” were giant bulls that amazed the humans with their incredible power shaking the ground when passing by in flocks and their tongue was visible when they were running. The image that the explosion just created had been perceived as a Godly power so that the mountain was perceived as a God, and these giant bulls were just the reflection of this mighty God on the earth.

The cult of Toro still visible all around the world for thousands of years and the identification of great mountains with a Godly power is considered as a continuation of the tradition that spread all around the world and penetrated in all cultures. The famous “Running bulls” of Spain or the “Minotaurs of Crete” are just late reflections of what had happened in the middle of Anatolia just 9000 years ago. The next blog will probe the worldly known monumental king tombs on the top of Nemrut Mountain whose extraordinary construction at 2150 m high – a real challenge 2100 years ago – became more understandable having the Catalhoyuk tradition on the back of our minds.