Under a white carpet of snow, Cappadocia is, if possible, even more beautiful. Wandering through Guvercinlik Valley with its stone spires or climbing the icebound steps of Uchisar Castle, you feel as if you have come to a magical winter wonderland. In the still cold air, you can see your breath and hear the whisper of falling snowflakes. Snow erases all unnecessary details and colors from the landscape, revealing it with unequaled clarity. The region lies at the heart of Asia Minor, in a triangle formed by the towns of Nevsehir, Urgup, and Avanos, and its history is as fascinating as its scenery. The story of Cappadocia can be traced far back in geological time to when the now extinct volcanos of Erciyes, Hasandagi, and Golludag were still erupting, burying the plateau beneath lava and volcanic ash. For 8 million years, the Kizilirmak and other rivers and streams eroded the tuff and basalt rock layers, sculpting this strange and fantastic landscape. In prehistoric times weary tribes seeking a place to settle made their homes in the caves of Cappadocia. Subsequently, the inhabitants discovered that the soft tuff was easily carved out, and in the 7th and 8th century’s BC began to create the first underground cities here. 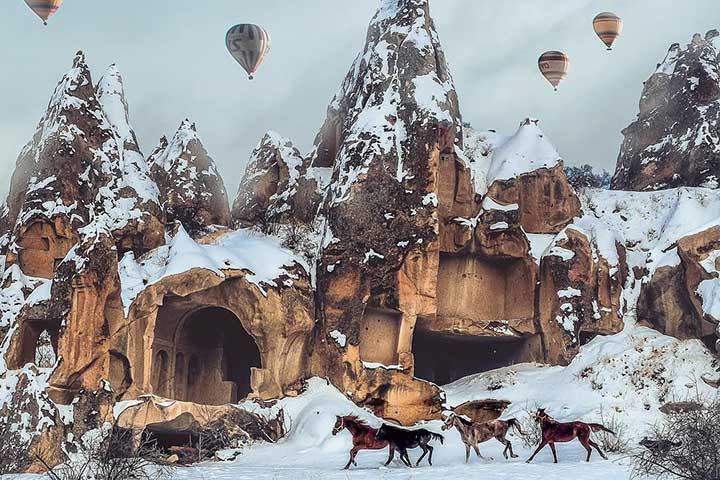 Even in the bitter cold of midwinter these underground passages and chambers are warm, and you wonder whether Cappadocia would not be the best place to spend the winter. Both the harsh climate and incessant threat of attack by enemies made safety a primary consideration for communities of these early times, and Cappadocia’s underground cities provided this as well as warmth and shelter. The Hittites, Phrygians, and Persians came and went, and then came the early Christians fleeing persecution, whose rock-hewn churches and monasteries with their fresco paintings are among the most spectacular sites of Cappadocia today.

The first European travelers to explore Cappadocia from the 18th century onwards were astonished by its geographic and historic sights. Paul Lucas, Charles Texier, and Ainsworth all noted in their diaries the impossibility of words to describe this extraordinary place. They likened the rock towers to priests wearing caps, to the Virgin Mary holding the infant Christ on her lap, to lions and birds. You too can join in this game as you explore the weird rock formations in the valleys of Cappadocia. But instead of being carried away by the romanticism of the snowy landscape and seeking the lost silhouettes of old loves, open your heart to the story of water, soil, and human beings. 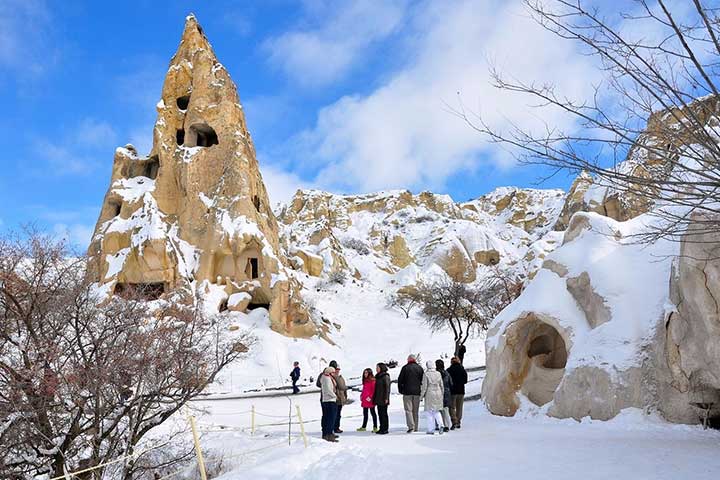 As the snow falls outside, imagine Assyrian and Hittite craftsmen making pottery, just as the potters of Avanos do on their wheels today, doves and pigeons huddling together for warmth in the shelter of the ancient dovecotes during the winter, a caravan wending its weary way along this last section of the Silk Road, the early Christians painting frescoes on the walls of their churches, the Seljuks seeking safety here from the Mongol incursions, and children bored of confinement in the narrow passages of the underground cities begging their parents to let them go out and play snowballs, and the excitement with which they must have run through the dark passages smelling of lamp oil and soot towards the light at the entrance. 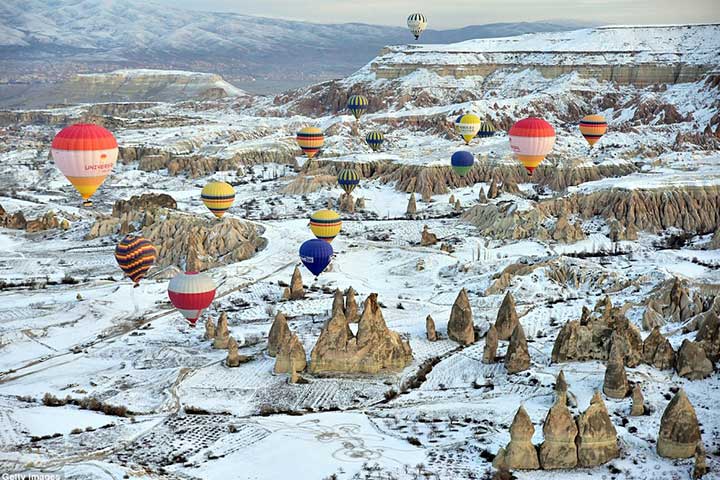 After a few snowy winter days in Cappadocia, you will see even the earth and water differently from before. The crisp white flavor of life and exuberance of nature will permeate your being, and you will realize that you are a small, but precious and indispensable part of humanity’s challenging and exciting story.