A Former Settlement of Hittites...

Alacahoyuk is a mound within the borders of the Corum in Turkey. Within this Hittites Mound, 14 settlement layers have been discovered belonging to 4 different cultural phases. Within the first phase of the mound, the foundlings starting with Frigs indicate the ancient settlements from Romans to Byzantine. There is also a dam dedicated to Goddess Hepat which is dated back to 1240 BC. It is discovered that the dam had been constructed by the Hittite King Tuthalia subsequent to the harsh drought in Anatolia.

During the summer, when the evenings are long, visitors to Bogazkoy can easily stop to see this amazing site on the return journey. With its still extant sphinx gate, its interesting architectural remains and its local museum, it is certainly an archaeological site that is well worth seeing. We mention here that, in the caption to plate 93 a, the Sphinx Gate, wrongly said to be at Yazilikaya, should read Alacahoyuk. 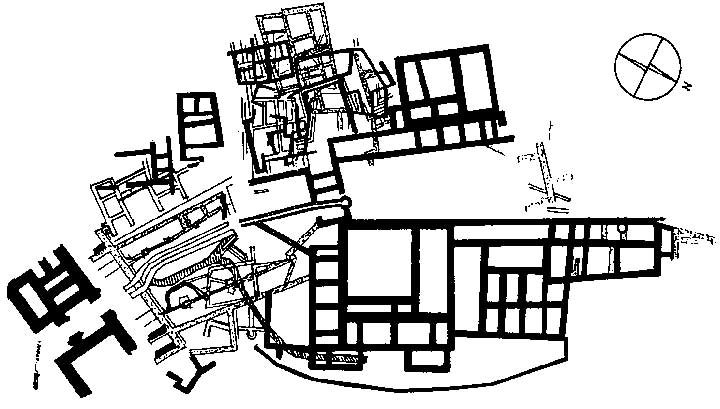 It was an important center as far back as the Chalcolithic Age, that is, from the 4th millennium on. Artifacts dating from this period and brought to light by Hamit Kosay are in the Ankara Museum.

Representation of an Early Bronze Age burial ceremony at the site. The king lies on a bier awaiting burial in a tomb in which the queen has already been buried with her jewelry and other possessions.

The settlement reached the peak of its importance in the Early Bronze Age. During Turkish excavations initiated thirty-five years ago by Ataturk, archaeologists Remzi Oguz Arik and Hamit Kosay unearthed one of the most valuable art treasures of ancient times. These fascinating works of gold, silver and bronze, including mysterious standards, now form an unrivaled collection in the Ankara Museum (Pls. 84 b, 85, 87).

The Hittite era, too, witnessed glorious times in Alacahoyuk. The remains which are still standing at the present day (see plan above) belong to the Hittite Empire period (1450-1180 BC). The sphinxes guarding the city gate can be seen on the spot, while the orthostats decorating the city wall have been removed to the museum in Ankara. However, they are now replaced by concrete casts. On the left side of the entrance facing east, we see from right to left on the orthostats: 1 - King and Queen, worshipping a bull. 2 - Animals for the sacrifice. 3 - Priests. 4 - jugglers (sword-swallower and a man climbing a ladder that stands up in the air. 5 - Musicians. 6 - Unfinished relief, representing a bull and perhaps a chariot.

On the right side of the entrance is depicted, in sitting position, the Sun Goddess of Arinna, the main female deity, worshipped by a number of adorants. The six male figures depicted on the southward-facing wall inside the entrance may also represent adorants, venerating the Sun Goddess of Arinna, who is seen on the aforementioned orthostat of the east front. The meaning of the scene with four persons, depicted on the northward-facing wall inside the entrance, is unknown. The inward-looking sides of the sphinx - blocks were also adorned with reliefs. However, the relief of the southern sphinx-block is entirely broken away; that of the northern sphinx-block is partly preserved; it represented a female divinity supported by a double-headed eagle, gripping two hares in its talons. From the standpoint of stylistic peculiarities, these reliefs belong to an artistic school differing widely from that found at Bogazkoy. Adjoining the east wall of the city is a large building resembling a temple rather than a palace, with a courtyard, measuring 18-20 m. in width and 80 m. in length. The examples uncovered at Hattusa clearly indicate that in Hittite cities the large structures served religious purposes, while the palaces were comparatively small. An excellent model showing the superimposed cultural levels of Alacahoyuk is exhibited in the middle hall of the Ankara Archaeological Museum as well.