Roses are the oldest source of perfume. Ancient Sanskrit documents mention rose oil, which is the strongest form of this scent, and in the Iliad’s Homer relates how Aphrodite rubbed Hector’s dead body with rose oil. What was meant by rose oil in these texts was not what we mean by this term today, since we learn from Hippocrates that it was obtained by stirring rose petals into hot olive oil. The method of extracting essential oil of roses was not discovered until much later. The most delightful story told of the discovery of the essential oil relates to the Mughal Emperor Jahangir (1569-1627), who is said to have had distilled rose water poured into channels in the extensive garden of his palace so that the air was filled with this beautiful scent. 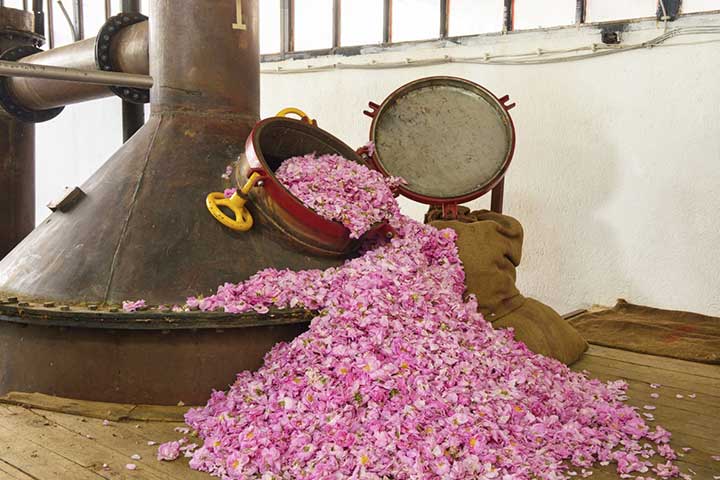 One day when the emperor’s wife was strolling through the garden she noticed a thin layer of oil on the surface of the rose water and examining it realized that this was where the power of the perfume was concentrated. From that time on she used the oil of distilled rose water for her perfume. In fact, however, charming as the story is, rose oil was known centuries earlier. Ibni Haldun, who lived in the 8th to 9th centuries, wrote that the finest rose oil was obtained by distillation. Distillation is the technique still used today to produce rose oil, whether in factories or in the cottages of rose cultivators. 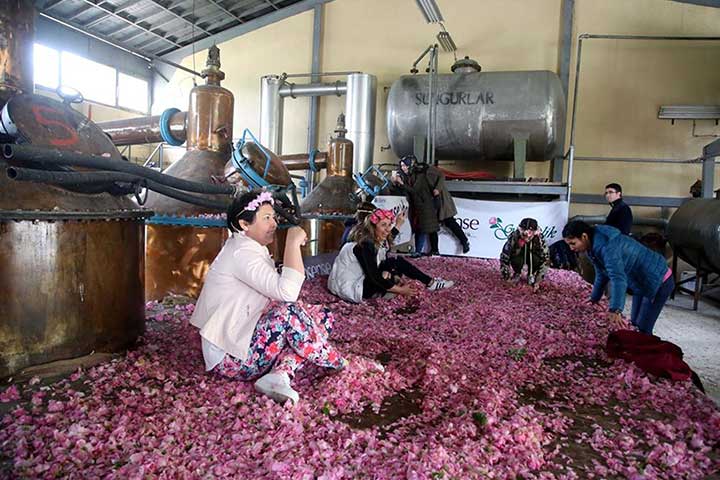 While in factories huge stills are employed, traditional producers use smaller copper stills heated over wood fires. One of the few Turkish villages where rose oil is still produced today is Yaylabeli in the province of Burdur, which is second only to Isparta in terms of rose cultivation. Yaylabeli lies in the foothills of the Sogut Mountains overlooking Lake Burdur about 150 kilometers north of Antalya. This beautiful spot, with the juniper-clad mountains behind and the lake below, has the perfect altitude and climate for roses.
Yaylabeli is a picturesque village with narrow labyrinthine streets and adobe houses. Here time seems to have lost its way and slipped back many decades. The friendly hospitable inhabitants seem to be always working busily. 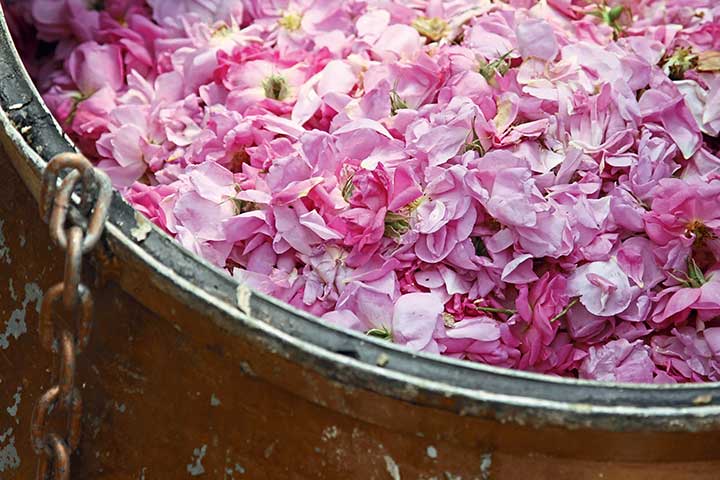 For at least 150 years, people here have been pruning their rose bushes and gathering the blooms. Until around 25 years ago every household here produced its own rose oil, but today only the family of Ismail continues this old tradition. The rose season begins on 18-20 March and continues until the end of June. This is the time when the village is at its busiest, above all in Ismail’s house. Before the sun has risen over the horizon the people set off on their tractors and donkeys to the rose gardens through the sweet-scented streets of the village. Almost all the 150 households grow roses, and the families must be up early to gather the pink blossoms before noon. They carefully pick the mature blooms, leaving the buds for the following day, filling basket after basket. I was surprised to see them break off the blooms by hand, but they explained that the thorns are lower down the stems. ‘And if we were pricked it would not matter,’ an elderly man named Mehmet told me. ‘No one who loves roses minds the thorns.’

While most of the roses are taken to the local cooperative, Ismail and his family take their home and fill the copper boilers of the stills. To every 100 kilos of petals, 240 liters of water are added, and the wood-fired beneath is lit. Behind the stills is a huge tank of cold water which is used for cooling the distilled rose water. The petals are boiled for two hours, during which time the steam passes through pipes which run through the tank, evaporating in the process. The resulting rose water is emptied into tin containers, each holding 100 kilos. This rose water is then poured back into the still while the other petals are still boiling and it is finally poured into bottles. The oil which rises to the top is removed using syringes and poured into separate bottles. It is now ready for sale to repay everyone for their hard work. Just 1 gram of rose oil is obtained from 3 kilos of rose petals. In other words, 3 tons of rose petals must be gathered and distilled to produce 1 kilo of rose oil. ‘Is it worth it?’ we asked Ismail, who replied, ‘I have been doing this work as long as I can remember. I cannot imagine giving it up.’ 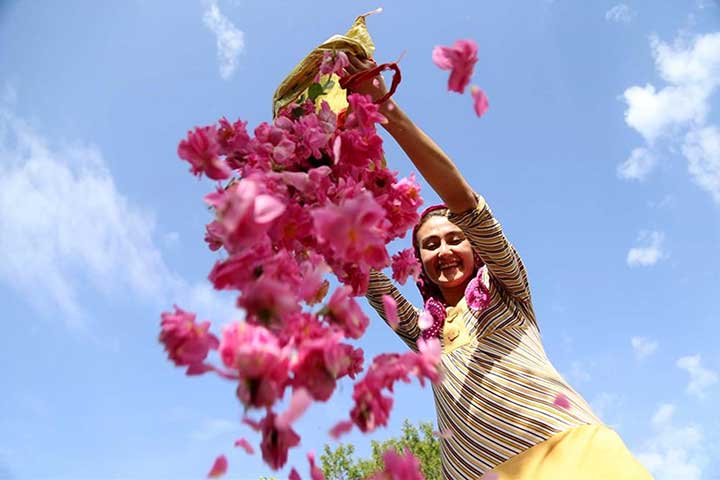 Old traditions and crafts have their own ancient harmony that nothing can replace when they die out. In Yaylabeli, roses are a way of life. Every spring and summer the people daily make their way back and forth to the gardens to harvest the blooms whose scent will give pleasure throughout the year.